The crisis exploded earlier this month after Castillo announced his intention to dissolve Congress and unilaterally take over control of the government, a move even some supporters called a “coup.” Soon after they heard the news, lawmakers overwhelmingly voted to impeach Castillo on charges of conspiring to spark a rebellion, as USA Today reported. President Dina Boluarte, the former vice president and now the South American country’s first female president, then replaced Castillo.

She is the sixth president in five years. And her government is already teetering toward collapse.

A former schoolteacher and union organizer who had never held office and campaigned last year as a leftist who would shake up the country’s economic system, Castillo governed as a moderate as he battled his political foes.

Prosecutors have accused him of running a corruption ring that benefits from public spending, Al Jazeera noted. Castillo has countered that those allegations are politically motivated. He sought to suspend congress, he said, because his rivals were seeking to block his agenda, which was popular among the majority of Peruvians who put him in office.

Peruvian police reportedly arrested Castillo on his way to request asylum at the Mexican embassy in the capital of Lima. As Axios explained, the Mexican government is considering his request as he awaits trial. Castillo’s lawyers wrote a letter to Mexican officials arguing that Castillo was ousted and detained for “mere announcements of will or intention that do not constitute any criminal offense.”

Meanwhile, Castillo’s supporters are furious, according to the New York Times. Protests erupted, with clashes resulting in the deaths of at least 20 people and hundreds of injured civilians and police officers. Many poor and working-class Peruvians feel as if powerful elite forces had pushed a member of their community out of office just as they had achieved an opportunity to change Peru’s crushing inequality.

Hanging over these contretemps is Peruvian history. In the 1980s and 1990s, the communist Shining Path rebellion blew up cars and assassinated leaders. The counter-insurgency response was harsh. More than 70,000 people died in the civil war.

Celebrated in the early 2000s for ending a cycle of dictatorship by ousting rightwing strongman Alberto Fujimori, Peru has more recently lurched from crisis to crisis, the Christian Science Monitor noted. For example, there have been seven impeachment attempts since 2016 along with a flood of corruption scandals centering on the political class. Three former presidents have been arrested, and a fourth killed himself to avoid arrest.

As a result, entrenched corruption has deepened distrust in institutions, making way for virulent conspiracy theories capitalizing upon and fueling growing tribalism and leading to a state of constant turmoil, say analysts.

Now it’s a toss-up as to whether the courts, legislators or the mobs decide who wins.

Less than nine percent of registered voters showed up this weekend to vote in Tunisia’s parliamentary elections, a dismal turnout that is sparking questions over the legitimacy of the government following its takeover by President Kais Saied last year, the Middle East Eye reported Monday.

Officials announced Monday that runoffs will be held in most Tunisian regions on Jan. 20 after only 21 candidates secured victory in the first round of the controversial vote, Reuters added. Many Tunisians avoided voting booths and opposition parties boycotted the poll.

The vote comes more than a year after Saied dissolved parliament, sacked the prime minister and began ruling by decree, a move critics labeled as a coup.

Since then, Saied pushed for a new constitution that would limit parliamentary power and called for new parliamentary elections. Critics warned that the president’s power grab has chipped away at the democratic gains Tunisia made following the revolution that ousted autocratic leader Zine El Abidine Ben Ali more than a decade ago.

Meanwhile, the new elections could serve to embolden opposition parties, which have already called for the president to step down following the election and its very low turnout.

Even so, it is unclear what the opposition can do to return to power. Questions also remain about what the newly elected parliament can do about the authoritarian moves of the president, as Saied has altered legislative rules.

The United States, meanwhile, said the low voter turnout reinforced the need for the North African nation to further expand political participation in the coming months.

Nearly 200 countries signed a historic agreement this week to halt the destruction of the Earth’s ecosystems, a pact that could put humanity on track to live in harmony with the environment by the middle of the century, the Guardian reported.

The agreement was reached during the two-week Conference of the Parties to the Convention on Biological Diversity (COP15), co-hosted by both Canada and China.

It follows more than four years of negotiations, amid declining insect populations, acidifying oceans filled with a growing volume of plastic waste and a ballooning human population that recently passed eight billion.

The new deal aims to protect 30 percent of the planet by the end of the decade, revoke $500 billion of environmentally damaging subsidies, as well as restore 30 percent of the of Earth’s degraded terrestrial, inland water, coastal and marine ecosystems.

It also urges action to halt human-caused extinctions of various species known to be under threat and promote their recovery.

Scientists have warned that humans are causing the start of Earth’s sixth mass extinction event, the largest loss of life since the time of the dinosaurs.

Although not legally binding, the agreement tasks governments with reporting their progress on the targets with national biodiversity plans.

Observers said the new deal could herald significant changes in agricultural and economic supply networks, and also the role of Indigenous communities in conservation.

Still, some African countries criticized the agreement because it did not create a new fund for biodiversity separate from the existing UN fund, the global environment facility (GEF).

China, Brazil, Indonesia, India, and Mexico receive the most GEF financing, while some African countries wanted more money for conservation as part of the final agreement.

However, some analysts expressed disappointment at the watered-down language on consumption and pesticide usage, both of which are key causes of biodiversity loss.

The phrase “nature positive,” which some scientists predicted would be the biodiversity equivalent of “net zero,” was not included in the accord. 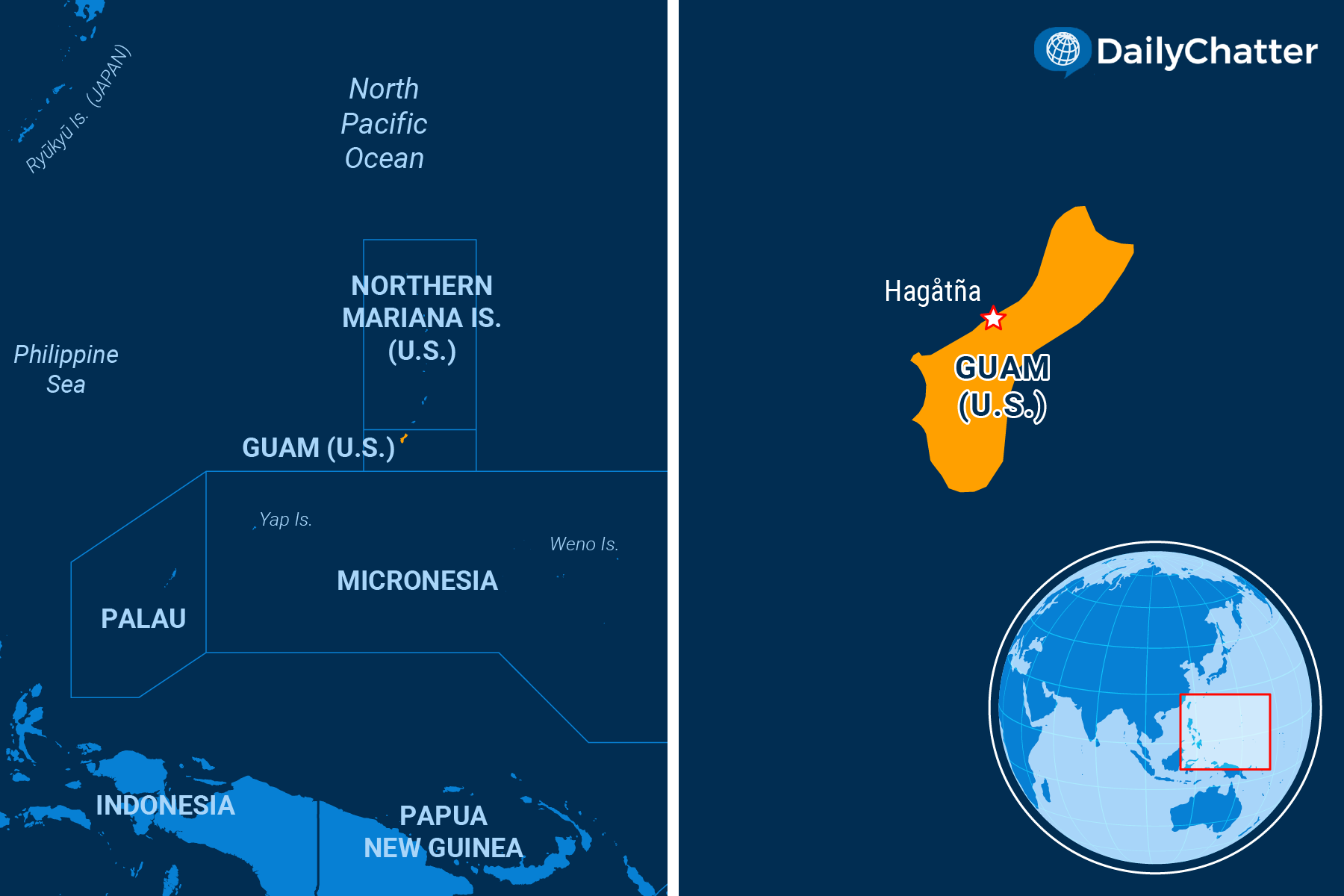 Guam passed a bill this week to restrict abortions in the US territory, a measure that resembles a new Texas law that leaves enforcement up to private citizens instead of law enforcement, the Associated Press reported.

The Guam Heartbeat Act of 2022 would ban abortion on the island once cardiac activity is detected, which is usually around six weeks of pregnancy – before many women know they are pregnant.

The bill also permits citizens to sue abortion providers in the territory who violate the law, as well as those who assist a woman to obtain the procedure. However, it prohibits lawsuits against abortion patients.

Getting an abortion is already challenging for citizens in the predominately Catholic US territory located south of Japan. The last physician who performed surgical abortions in Guam retired in 2018.

Currently, two Guam-licensed doctors living in Hawaii see their patients virtually and mail them abortion pills. This alternative is available until 11 weeks into the pregnancy.

Hawaii is the nearest state where abortion is permitted, but is 3,800 miles away and involves an expensive eight-hour flight.

Ants can produce “milk” to nourish themselves and their offspring,

Researcher Orli Snir initially noticed that the pupae of clonal raider ants would produce a watery, golden-tinted fluid that would eventually drown them if the strange goo was not removed, the New York Times reported.

This was puzzling because the pupae stage is considered a passive state in the ant’s lifecycle: It starts as a worm-like larva, seals itself into the rice-looking pupa and then becomes a full-fledged ant.

Still, past studies have documented this milk-like substance from pupae but have never fully explored it until now.

In a new study, Snir and her colleagues added some blue food coloring to pupae shells and closely observed the actions of the ant colony. Within a few hours, she noticed that both adults and larvae took on the blue tint, which means they fed on the pupae goo.

The findings also showed that adults would also place the younger larvae on top of the pupae to feed on the secretions, which early analysis show contains hormones and neuroactive compounds.

They explained that the study unveils a web of codependent relationships in ant colonies: Adults and youngsters need the milk to feed on, otherwise the pupae will die. And if the colony’s youngest members don’t consume the goo, they are more likely to die.

The authors added that the findings also help understand ant species as a whole, such as how the present-day insects developed into tight-knit social colonies.