The Tanzanian government describes the transfer of ethnic Maasai people from their traditional homelands as “voluntary relocation.” The Maasai call it “eviction,” Le Monde reported. The truth is far more complicated, especially after the regional East African Court of Justice recently ruled that the government legally moved the semi-nomadic herders in the interests of protecting wildlife in Serengeti National Park.

In a recent decision, the court dismissed Maasai allegations that the government used violence to kick them off their land as part of a plan to conserve 580 square miles of the national reserve, reported Al Jazeera.

The Maasai failed to prove their claims that officials used violence and the destruction of their property, including the torching of their homes, five years ago to compel them to move, added Mongabay, an environmental news outlet.

Officials claimed their plan was justified based on the growth of the Indigenous people’s community and local ecosystems. The Maasai population has increased from 8,000 people around 60 years ago to more than 100,000 today. Their livestock population has grown from 260,000 five years ago to one million today.

The Maasai are planning to appeal. The court, said the community’s lawyers, did not technically give the government the right to evict the Maasai – and had accepted that the village is separate from national park land, Radio France Internationale wrote. The lawyers also argued that the court should have accepted testimony from a Kenyan surveyor which bolstered their case.

The government, meanwhile, continues to lease the land to a United Arab Emirates-based company that runs trophy hunting and elite tourism excursions. That isn’t quite the protection for wildlife that most environmentalists had imagined.

The court has set a dangerous precedent, said Fiore Longo of Survival International, a group that advocates for native communities around the globe. “The court has given a strong signal to the international community that evictions and human rights abuses against Indigenous peoples should be tolerated if they are done in the name of protecting nature,” Longo told Reuters.

Inhabiting the border regions between Tanzania and Kenya, as the Jerusalem Post reported, the Maasai still live mostly according to their traditions, wearing brightly-colored robes and eating raw meat and milk, for example, from their cows. But they have also embraced elements of modern life. The Maasai have opened social media accounts where they have generated viral videos of warriors eating pizza and launched online fundraising sites with the goal of creating businesses to generate income for their families.

Perhaps they will have better luck in the court of public opinion.

Mexican lawmakers voted to eliminate daylight saving time this week, a move that ends the turning of the clock twice a year, the New York Times reported Thursday.

Under the new measure, daylight saving time will not apply to the majority of the country. That means most Mexicans will change their clocks for the last time next week. However, the area along the border with the US will not be affected and clocks will continue to be changed twice a year.

The upper house of parliament said on Twitter that the changes seek “to guarantee the human right to health and increase safety in the mornings, procure the well-being and productivity of the population, and contribute to saving electric energy.”

Mexico initially adopted daylight saving time in 1996 but has been debating dropping it ever since.

Supporters – such as retailers and outdoor industries – say the extra afternoon daylight increases sales because customers have more time to shop or partake in leisure activities after work or school.

Critics, however, counter that the shift disrupts people’s circadian rhythm, which is closely linked to sunlight, resulting in tiredness and more dangerous commutes in darker mornings.

Daylight saving time is not observed in China, India, or Russia.

In 2019, European Union lawmakers voted to end seasonal time changes and instead enable each country in the bloc to choose whether to observe daylight saving time all year or stick to standard time. 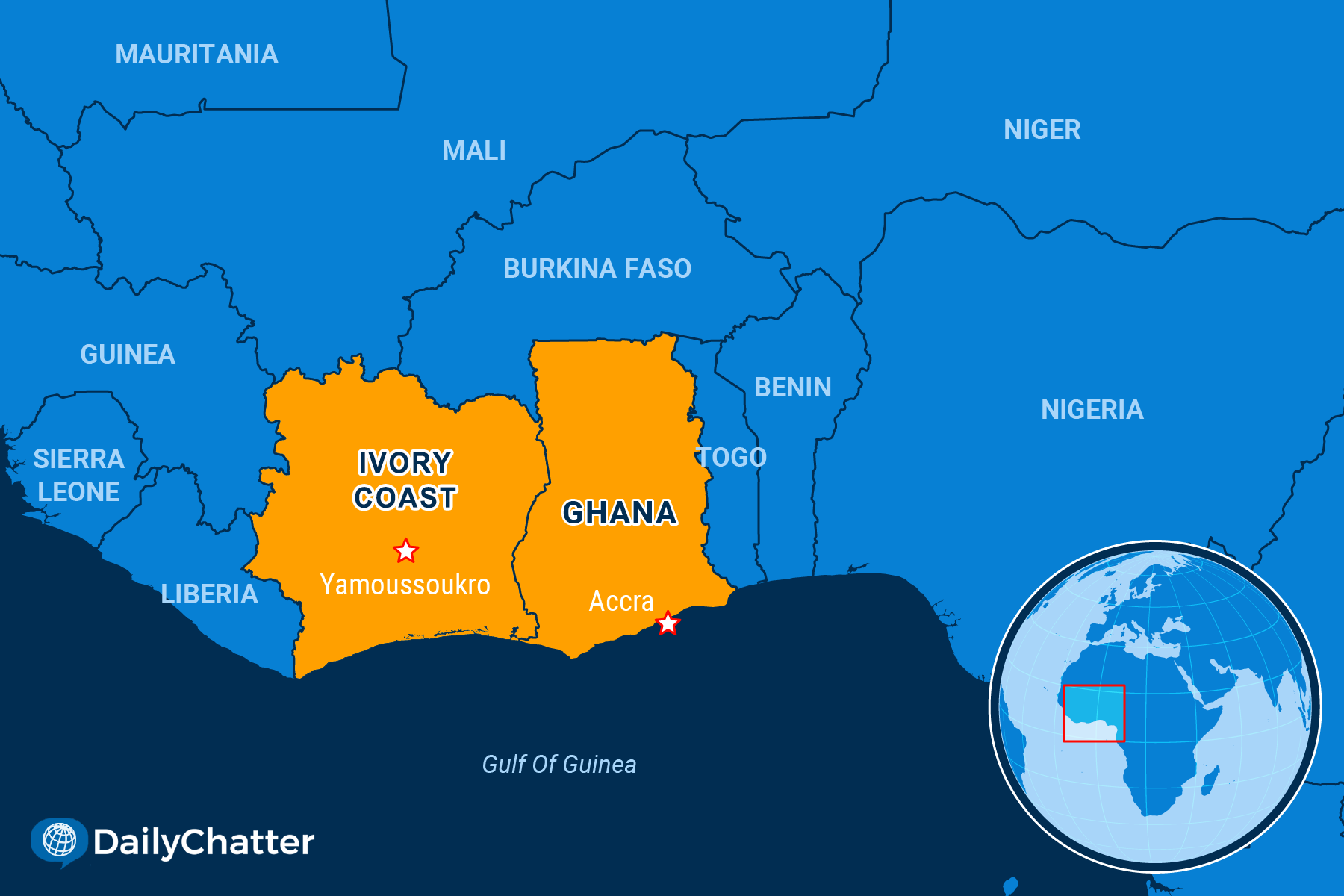 The World Cocoa Foundation, a group representing 80 percent of the global market, met in Brussels to discuss steps to improve farmers’ pay, combat child labor and put an end to deforestation linked to the cultivation of the crop.

Officials of the two West African countries, however, accused multinational chocolate companies and traders of blocking measures to improve the income of cocoa farmers. Their complaints were aimed at the Living Income Differential, which set a standard rate of $400 per ton of cocoa and charged on top of world prices.

The differential was introduced in 2019 to ensure a minimum price and improve the income of cocoa farmers – many of whom live in poverty.

Civil rights groups in both nations have slammed the policies, saying farmers have been given a raw deal when it comes to pricing.

Ghana and Ivory Coast account for about two-thirds of global cocoa production.

Even so, farmers in those countries receive less than six percent of the revenues of the chocolate industry which is worth more than $100 billion each year.

A Thai media tycoon and transgender businesswoman bought the Miss Universe Organization this week, marking the first time the beauty pageant organizer will be owned by a woman, CNN reported Thursday.

Running since 1952, the Miss Universe beauty contest is one of the world’s most-watched pageants. But like other contests, it has come under increasing public pressure to create more inclusivity and diversity.

In 2012, the international pageant lifted its ban on transgender contestants following a complaint from a Canadian competitor, who threatened legal action when told she would be disqualified due to her gender change.

Jakkaphong is known for her roles in Thai reality shows including “Project Runway.” She has been outspoken about her experiences as a transgender individual and is an advocate of transgender rights in Thailand.

“We seek not only to continue its legacy of providing a platform to passionate individuals from diverse backgrounds, cultures, and traditions, but also to evolve the brand for the next generation,” said Jakkaphong.

This week, Russian President Vladimir Putin continued to accuse Ukraine of preparing to detonate a “dirty bomb,” an allegation with no basis, but one raising fears in the West that the Kremlin was manufacturing an excuse to intensify its war in Ukraine, according to the New York Times. Russia has also drafted a United Nations Security Council resolution that would investigate claims that the US and Ukraine are violating prohibitions on biological weapons due to work at Ukrainian biological laboratories, The Hill added. Western nations have denied such allegations, while Ukrainian officials have accused Russia of planning such an attack itself to then blame Ukraine, Reuters noted.

Meanwhile, Ukrainian troops this week continued to hold out against repeated strikes in two towns in the eastern Donbas region, with Ukrainian President Volodymyr Zelenskyy calling Russia’s tactics “crazy,” Al Jazeera reported. At the same time, Ukraine’s counteroffensive against Russian forces in the southern Kherson region is proving more challenging than a previous offensive in Kharkiv due to wet weather and rough terrain.
Also this week:

A Matter of Bias

A new study found that schoolteachers exhibit some bias when it comes to grading boys and girls, Sky News reported.

Italian researchers compared data from nearly 40,000 test scores from year 10 students in standardized tests of language and math with the grades they achieved in their classroom exams.

While the standardized tests were marked anonymously, the classroom exams were graded by the teachers themselves.

The team saw there was an interesting inconsistency: On the standardized exams, girls excelled in the language tests, while boys performed better in math. But when teachers marked their tests, girls would come out on top in both subjects.

The findings also showed that even when a girl and boy were equally apt students, the girls would receive higher grades.

The researcher proposed factors for this bias, including suggestions that teachers subconsciously reward students exhibiting traditionally female behavior, such as quietness and neatness – which makes life easier for the educator.

Another theory is that inflated math grades are intended to encourage girls, who are generally perceived as weaker in this subject.

Even so, the authors cautioned that this bias underscores a systemic problem and can result in wider consequences in areas such as college admissions, job choices, and earnings.

“There is a strong correlation between having higher grades and desirable educational outcomes, such as gaining admission to good colleges or having a lower probability of dropping out of school,” said lead author Ilaria Lievore.