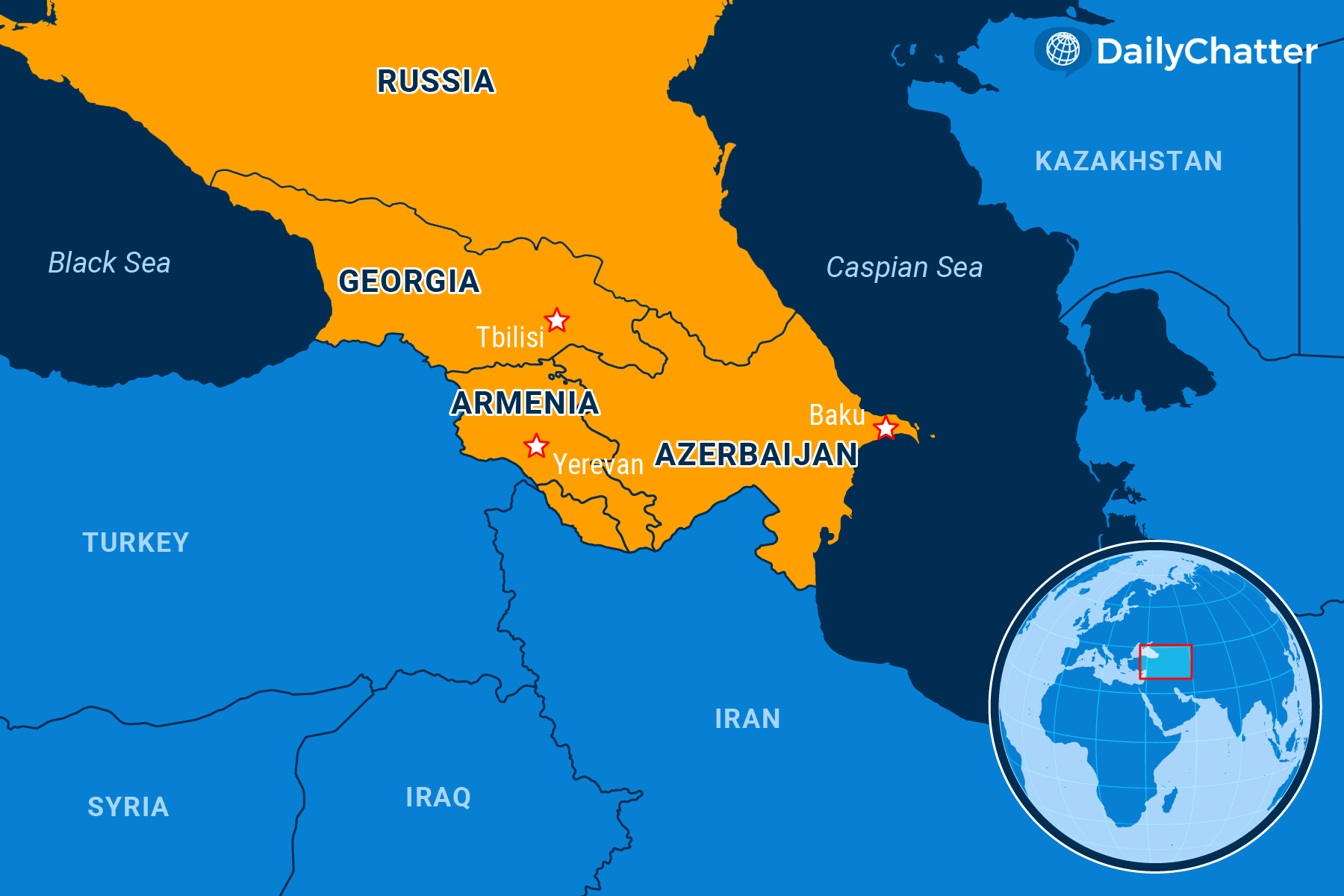 Armenians have a unique perspective on Russian power. On the farthest-most edge of Europe, the former Soviet republic in the Caucasus hosts a Russian army base and belongs to the Collective Security Treaty Organization (CSTO), a military alliance centered on Russia. But they also abut Georgia, another ex-Soviet Republic that Russia invaded in 2008. So, even before the Ukraine war, they witnessed Russian President Vladimir Putin’s wanton aggression.

In recent weeks, the balance has tipped from Armenians trusting Russia to fearing it.

Spurring the change was Russia’s inaction while another ex-Soviet republic, Azerbaijan, escalated tensions over control of the enclave of Nagorno-Karabakh, where an ethnic Armenian community resides. Two years ago, Armenia lost the enclave in a short war with Azerbaijan. Armenian officials have requested Russian help in the conflict, reported bne Intellinews, but Russia is obviously preoccupied.

French President Emmanuel Macron recently even claimed that Russia was purposefully stoking tensions between Armenia and Azerbaijan in order to destabilize the region, Reuters wrote.

As a result, Armenians recently took to the streets in the capital of Yerevan to call for their country to exit the pact after Russia did nothing to prevent aggression from Azerbaijan, which is not a CSTO member. “The US and Europe are our last hope,” an Armenian protester told Euronews. “I am here today because I want us to get out of the CSTO. The CSTO has become a useless organization for our state. It does not do anything. It does not help it.”

The shift underscores how Putin’s invasion of Ukraine is exposing not only his military’s weakness but also the shallowness of Russia’s geopolitical influence across the former Soviet empire.

“We are seeing the collapse of Russia’s reputation as a security patron, which is happening both at the material level with the massive force concentration on Ukraine, but also on the subjective level of the reputation of Russian security guarantees,” Chatham House associate fellow Laurence Broers told the Guardian.

Meanwhile, Russians escaping the draft have fled into former Soviet republics including Georgia, causing traffic jams and chaos on the border, CNN wrote. Car lines were 10 miles long. Among those fleeing was Mikhail Lazutin, a pro-Kremlin blogger that Newsweek described as Putin’s “top propagandist.”

Even on Russian territory in the North Caucasus, Putin’s grip on power appears to be fracturing. As the Asia Times explained, anti-draft protests have sprung up in the lower and working-class communities in the region that have already contributed disproportionate numbers of men to the war effort in Ukraine.

Even autocratic leaders need to instill confidence to retain power. Putin appears to be losing his ability to do so.

Chinese President Xi Jinping laid out his plans for China’s future during the Communist Party’s 20th congress in Beijing Sunday, where thousands of delegates are expected to extend the incumbent’s rule for another five-year term despite constitutional term limits, NPR reported.

More than 2,300 party delegates from around China converged for the week-long event, which will set the tone for policy in the coming years and reshuffle the country’s top officials.

Xi is set to defy decades-old leadership and succession rules by taking a third term as party chief. Since he came to power in 2012, Xi has consolidated his authority within the party and removed retirement practices to allow himself to stay in office indefinitely, the Wall Street Journal added.

His predecessors had previously implemented term limits to avoid the return of a dictatorship style similar to the rule of Mao Zedong – who ruled China for 27 years.

During his nearly two-hour speech, Xi highlighted the achievements of the party since he came to power a decade ago, while also outlining the principles for the Communist Party’s rule and policies over the next few years.

He praised China’s strict “zero Covid” strategy to curb the spread of the coronavirus and did not signal any intention to end measures anytime soon. At the start of the pandemic, China implemented restrictive pandemic control policies including tight border controls, mandatory mass testing, invasive digital surveillance, forced quarantines and snap lockdowns – often of entire cities.

While Covid-19 cases and deaths have been kept in check by official counts, the strategy has affected the domestic economy and frustrated many Chinese – some participated in rare protests against Xi’s policies just three days before the party congress.

On China’s economy, Xi reiterated his pledge of a new era of “common prosperity,” in which the party exerts stronger control over private capital and more equitably shares China’s resources. Some of these policies, however, refer to recent regulatory crackdowns on Chinese tech giants and private businesses that have unnerved investors.

The president also reaffirmed China’s support for globalization and adherence to a decades-old national policy of “reform and opening up”, but stressed the country’s need to become more self-sufficient in different sectors, including food production.

Regarding Taiwan, he reiterated the party’s goal to unify the self-governed island with mainland China, adding that Beijing will not renounce the use of force in its goal for unity.

Xi also made mention of China’s global ambitions, saying the party should foster a sense of “purpose, fortitude and self-belief … so that we cannot be swayed by fallacies, deterred by intimidation or cowed by pressure.”

Meanwhile, he said, as he often does, that China now has a historic chance to improve its global stature and influence.

Iraqi lawmakers elected Abdul Latif Rashid, a Kurdish politician and former minister for water, as the country’s new president, the first step to ending a long-running political deadlock that has left Iraq without a government since last year’s elections, the New York Times reported.

Rashid’s election came as rockets struck the capital’s heavily guarded Green Zone – where the legislature is based – and other areas of Baghdad. Authorities said at least three people were injured, while buildings and vehicles were damaged.

No one claimed responsibility for the attacks but caretaker Prime Minister Mustafa al-Kadhimi denounced them as an “attempt to obstruct the democratic process.”

The president’s election follows a year of political crisis in Iraq that began after the October 2021 election. That poll was a major victory for the political bloc of Shiite cleric Muqtada al-Sadr, who has rejected interference in Iraqi affairs by Iran as well as other countries.

Even so, Sadr’s faction failed to form a government. Iraq’s political turmoil escalated in August when the cleric announced he was leaving politics. Shortly after his announcement. Sadr’s supporters stormed the Green Zone and the parliament.

But his withdrawal also caused the Coordination Framework, a political bloc made up of mostly Iran-backed Shiite parties, to become the largest parliamentary alliance and have the right to nominate a new prime minister, according to Al-Monitor.

Analysts said that Rashid’s election will ease the way for the nominee for prime minister, Mohammed Shia al-Sudani, to form a government. Sudani, who had served as a minister in preceding governments, pledged to improve public services, crack down on corruption and implement government reforms.

He now has a month to offer his cabinet picks to parliament, a procedure that is often carried out in backroom negotiations between parties prior to the cabinet being publicly presented for approval.

Iraq’s deadlock has made it impossible for lawmakers to pass an annual budget, leaving billions of dollars in oil revenue unspent.

A female-featured robot spoke in front of Britain’s upper house of parliament this week, marking the first time in the country’s history that an android testified in front of baronesses and lords, the Washington Post reported.

Named Ai-Da, the android appeared in the House of Lords as part of an inquiry into the future of artificial intelligence in creative industries. She has been branded as “the world’s first ultrarealistic humanoid robot artist” and is known for creating portraits and poems using a robotic arm, cameras in her eyes and AI algorithms.

During her appearance in the upper chamber, she told lawmakers that her unique traits allow her to create “visually appealing images.” She added that technology poses both “a threat and an opportunity” for creativity.

But as she was answering questions, the automaton suddenly “fell asleep” and required a reset, amusing – and scaring – members of the audience.

Aidan Meller, Ai-Da’s inventor, did not say what caused the technical failure.

Since her creation in 2019, the robot has faced some backlash at home and abroad: Last year, Egyptian authorities took her into custody for more than a week on suspicion that the cameras in her eyes can be used for espionage.

She was later released following the intervention of Britain’s ambassador to Egypt.

The agency’s Double Asteroid Redirection Test (DART) spacecraft was able to divert the orbit of the 525-foot-long Dimorphos asteroid after crashing against the space rock last month.

The DART mission is part of NASA’s efforts to protect Earth from world-ending asteroids or comets. Planetary defense scientists suggested that it would be safer to shift the orbits of these celestial bodies, instead of bombing them, which can result in smaller space rock debris hitting our world.

The space agency selected Dimorphos, which orbits around its parent asteroid, Didymos. Neither of them poses a threat to Earth.

Last year, NASA launched the vending machine-sized DART, which later slammed into Dimorphos at a speed of 14,000 miles per hour on Sept. 26. The impact left a crater in the asteroid and created a comet-like trail of dust and rubble stretching thousands of miles.

Scientists closely observed how the crash impacted Dimorphos and the results exceeded their expectations. Before the impact, the smaller asteroid circled its parent for 11 hours and 55 minutes. Researchers expected the hit to shorten the asteroid’s orbit by 10 minutes, but they found that the impact reduced it by 32 minutes.

They added that the smash also left Dimorphos wobbling a bit and its orbit will never go back to its original location.

“This mission shows that NASA is trying to be ready for whatever the universe throws at us,” said NASA Administrator Bill Nelson.

Correction: In Friday’s UKRAINE, BRIEFLY section, we said that the United Nations General Assembly unanimously voted to condemn Russia’s “attempted illegal annexation” of four Ukrainian regions. In fact, the 193-member world body had 143 votes in favor of condemning the annexation, five against, and 35 abstentions. We apologize for the error.