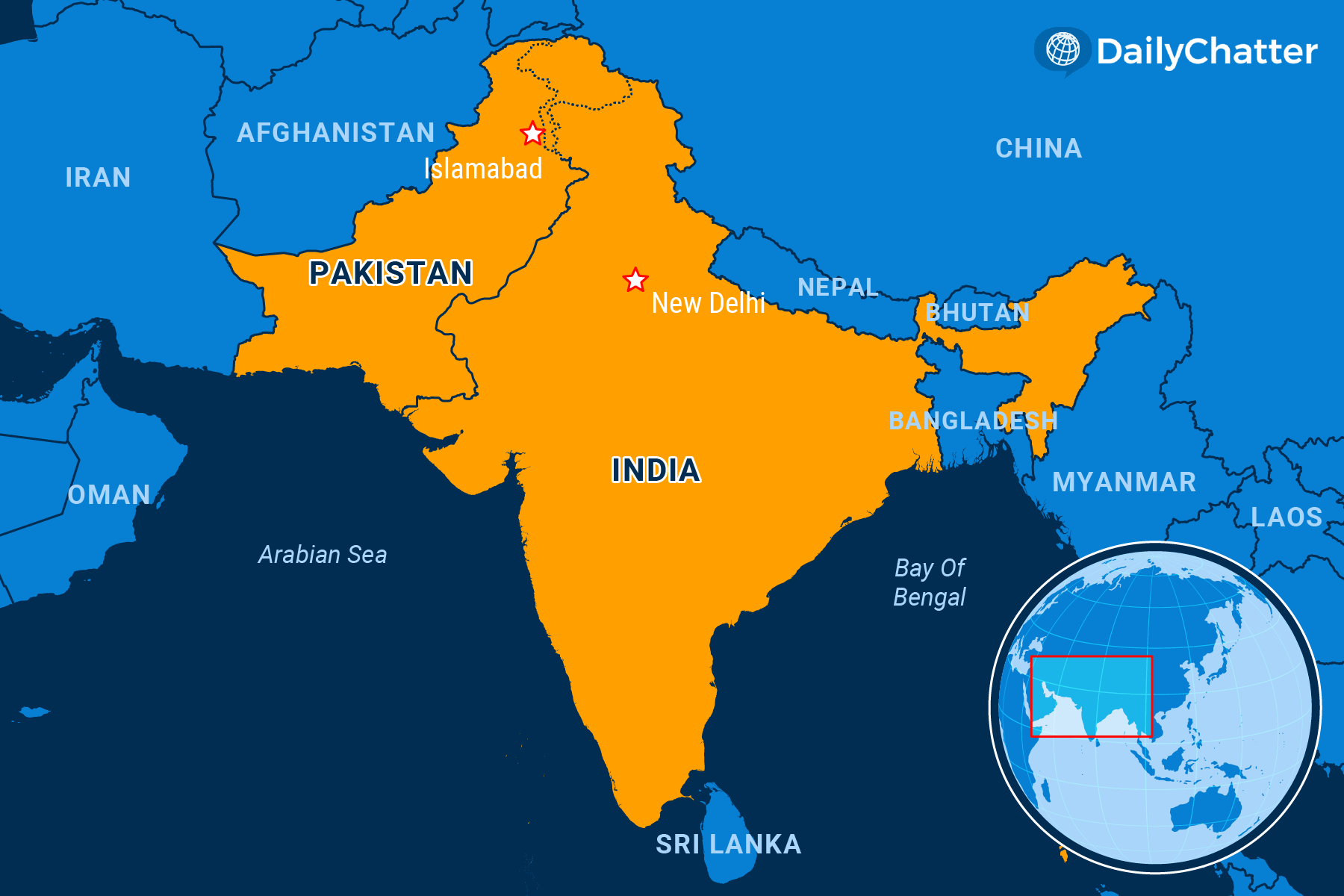 India and Pakistan had the rare experience of separating from one another at the same time they achieved independence from Britain, 75 years ago this month, on Aug. 15, 1947. Both countries appear to still be in search of themselves since then.

Prime Minister Narendra Modi used his massive country’s diamond anniversary to pledge that India would become a “developed” nation in the next 25 years, as CNN reported. “The way the world is seeing India is changing,” he said. “There is hope from India and the reason is the skills of 1.3 billion Indians. The diversity of India is our strength. Being the mother of democracy gives India the inherent power to scale new heights.”

Indian news outlet the Wire noted how Modi appeared to be echoing the so-called ‘Tryst with Destiny speech’ by Jawaharlal Nehru, India’s first prime minister. “A moment comes, which comes but rarely in history, when we step out from the old to the new,” Nehru said on the eve of Indian independence. “When an age ends, and when the soul of a nation, long suppressed, finds utterance.”

But Modi’s Hindu nationalism appears to have overlooked or even shunned the cosmopolitan and pacifist tradition of Mahatma Gandhi that underpinned the drive for independence, the Washington Post wrote. Instead, Modi seeks to create a more muscular India with Hindu traditions made central to its identity, despite the country’s long commitment to secular government and tolerance.

Similarly, many Pakistanis who celebrated their independence on Aug. 14 evoked a multicultural, tolerant vision propounded by the country’s founder, Muhammad Ali Jinnah, the Jerusalem Post reported. Some called on their fellow citizens to band together to overcome the difficult, post-Covid economic climate that was currently challenging their country.

But, as correspondent Umair Jamal wrote in the Diplomat, the country’s political culture has veered away from that open-minded vision as intolerance and militant Islam have become more widespread there.

The scars of India’s and Pakistan’s births still linger. When British lawyer Cyril Radcliffe drew the new borders between the two countries after 200 years of British rule, he had five weeks to prepare and had never visited India, Al Jazeera explained. The result was the largest forced migration in human history as 15 million people moved to, or remain in, either Hindu-dominated India or Muslim-dominated Pakistan. Two million people died in the violent transfer.

The two countries still fight over control of Kashmir, an area that both have claimed since the partition, the BBC added.

And even today, families and neighbors remain separated by the borders, drawn 75 years ago.

But then lines on a map are only part of a journey to nationhood.

Ecuadorian authorities arrested a suspect connected to a deadly weekend blast in the port city of Guayaquil, an explosion that marked an escalation of gang violence in the South American country, Agence France-Presse reported this week.

On Sunday, five people died and 17 others were injured when two individuals on a motorcycle threw a bag of explosives into a restaurant in the Cristo del Consuelo district of the port city.

Interior Minister Patricio Carrillo said the suspect “admitted to being involved in the terrorist attack” in the district.

The explosion rocked the country, prompting President Guillermo Lasso to declare a 30-day emergency in the city.

The recent attack underscores the ongoing problem of organized crime and drug trafficking in Ecuador, a country sandwiched between two of the world’s largest cocaine producers, Colombia and Peru.

According to United Nations data, Ecuador accounted for 6.5 percent of the cocaine captured worldwide in 2020. Feuding between rival gangs has reached the country’s prisons and has left more than 400 dead since February 2021.

Guayaquil has been particularly affected: The city experienced 72 of 145 explosive-related attacks in Ecuador this year, according to the government.

The city, which is also the home to the country’s main port, serves as a crucial hub for drug trafficking from Peru and Colombia.

Let There Be Pads

Scotland became the first country in the world this week to offer tampons and other menstrual products for free to everyone, as part of a push to end “period poverty,” the Washington Post reported.

The products will be available for free in public spaces such as community centers, pharmacies and youth clubs, officials said.

The bill behind this move, initially introduced in the Scottish parliament two years ago, is part of a broader global movement to combat period poverty, a situation that means a lack of access to feminine hygiene products because of their high costs.

Many countries and regions, including the UK, EU and the US, have moved over the past few years to make these products more accessible. New Zealand, for example, began offering period products in schools last year.

“We are the first but won’t be the last,” tweeted Monica Lennon, the member of the Scottish parliament who introduced the legislation, to offer these products cost-free nationwide.

“We hear of a lot of mothers going without their period protection just so they can feed their children and using things such as newspaper stuffed into socks or bread … because they’re cheaper than period products,” Georgie Nicholson of Hey Girls, a group working to eradicate period poverty, told the Good Morning Scotland broadcast.

First in the Nation

The Australian state of Victoria passed a landmark bill to create the country’s first Indigenous treaty authority that would oversee treaty negotiations, as well as resolve disputes between traditional owner groups and the state government, the Guardian reported.

Made up of five Aboriginal leaders, the authority will employ a novel dispute process that is different from the “adversarial” nature of land justice fights, according to officials.

The new treaty process is based on models previously used in Canada’s British Columbia and New Zealand. The first treaties in the state could be signed as early as next year.

The establishment of the authority makes Victoria the first jurisdiction in Australia to implement the two main components of the 2017 Uluru Statement from the Heart, a document written and endorsed by hundreds of Aboriginal leaders to amend the constitution to improve the representation of Australia’s Indigenous people.

The two components address the creation of a truth-telling commission and a body to oversee treaty-making processes. Last year, Victoria established the Yoorrook Justice Commission, which will also inform the state’s treaty process.

Meanwhile this week, another state, Queensland, announced a three-year Indigenous truth-telling probe. The state is currently moving forward in its treaty negotiations with its First Nations people.

Past research discovered that giving the blood of young mice to their elders rejuvenated rodents and reversed signs of aging.

Recently, scientists discovered that the opposite is also true, New Scientist reported.

Researcher Irina Conboy and her team transfused three-month-old mice with the blood from two-year-old mice to determine how it impacted the youngsters.

The changes were very noticeable, they wrote.

After two weeks, researchers spotted an increased number of senescent cells in the younger mammals. They explained that these cells – found in the liver, kidney and muscles – accumulate as a normal part of aging. While they are not dead, senescent cells are damaged and stop dividing.

Conboy explained that the findings suggest that cellular aging isn’t just a case of wear and tear.

“Cell senescence is only part of the process of aging,” she said. “That opens new horizons and helps explain why senolytics (drugs that clear senescent cells in the body) so far in clinical trials were less successful than people hoped.”

The authors said the experiment can enhance future research in tackling health issues related to aging and the development of anti-aging treatments.