The Chernobyl disaster in 1986 was among the worst nuclear accidents in world history. Now, the world is bracing for another.

“Humanity is just one misunderstanding, one miscalculation away from nuclear annihilation,” warned UN Secretary-General António Guterres earlier this month.

Thirty-six years ago, the explosion and fire at Chernobyl happened in the then-Soviet Union, while its impact was felt around much of Europe. Today, the ruined reactor is now in Ukraine. That experience is one reason why Ukrainian President Volodymyr Zelenskyy has been issuing fervent calls for assistance to make sure another meltdown doesn’t occur in his country at the Zaporizhzhia nuclear power station, the largest in Europe – and currently under Russian control.

He has good reason to worry.

Fighting around the station could easily lead to damage that might trigger an ecological, humanitarian and political catastrophe, Zelenskyy recently warned. “If now the world does not show strength and decisiveness to defend one nuclear power station, it will mean that the world has lost,” Zelenskyy said in a video recently, according to Reuters. “It will lose to terrorism. And give in to nuclear blackmail.”

An errant shell could damage the device that regulates the reactor pressure and prevents explosions, the Moscow Times noted. They could strike it in a way that would disperse radioactive materials and cause widespread contamination – equivalent to a dirty bomb – or interfere with its pressurized water-cooling system, leading to a meltdown, the Washington Post said.

Shelling has already led locals to flee the region so as to avoid being caught in a radioactive cloud that could quickly affect people as far away as Belarus, Bulgaria, Moldova, Romania and Russia, the New York Times added. An accident would impact both armies and locals, and make the land uninhabitable for generations.

Russian troops now occupy Zaporizhzhia, which is almost 200 miles northeast of Kherson, a city that has seen intense fighting in recent weeks as Ukrainians fight to reclaim it from its Russian occupiers. Around 500 Russian troops are forcing nuclear power plant workers to stay at their desks, the BBC reported, while the troops use the plant as a military base.

But they might need to go soon. After suffering setbacks to Russian forces who have hunkered down in pro-Moscow separatist regions in the eastern part of the country, Ukrainian forces have made gains in the area, the US Department of Defense said.

Additionally, Ukrainian officials are now suggesting that Russia might mount a so-called “false flag” mission involving the plant – damaging it but blaming the Ukrainians to undercut international sympathy for their cause, the Guardian reported. Former Russian President Dmitry Medvedev labeled that notion absurd, however, even for Ukraine’s “stupid Russophobic public,” wrote Al Jazeera.

Other factors might be at play. Russian President Vladimir Putin has already employed energy-related tactics to break Western Europe’s near-united opposition to his invasion that began in late February. As the largest nuclear power plant in Europe, Zaporizhzhia gives him enormous leverage in disrupting electricity supplies in the region when prices are already soaring, the Wall Street Journal explained.

Meanwhile, Rafael Mariano Grossi, the head of the International Atomic Energy Agency is pleading with Russia and Ukraine to allow agency officials to visit and secure the plant, warning of the “highly volatile and dangerous situation.”

“This is a serious hour, a grave hour,” he told the UN Security Council. Detailing shelling and explosions in the past few weeks that forced the shutdown of the electrical power transformer, two backup transformers, and one nuclear reactor, he added that the situation is completely out of control.

So far, disaster has been avoided. But luck is not a strategy. 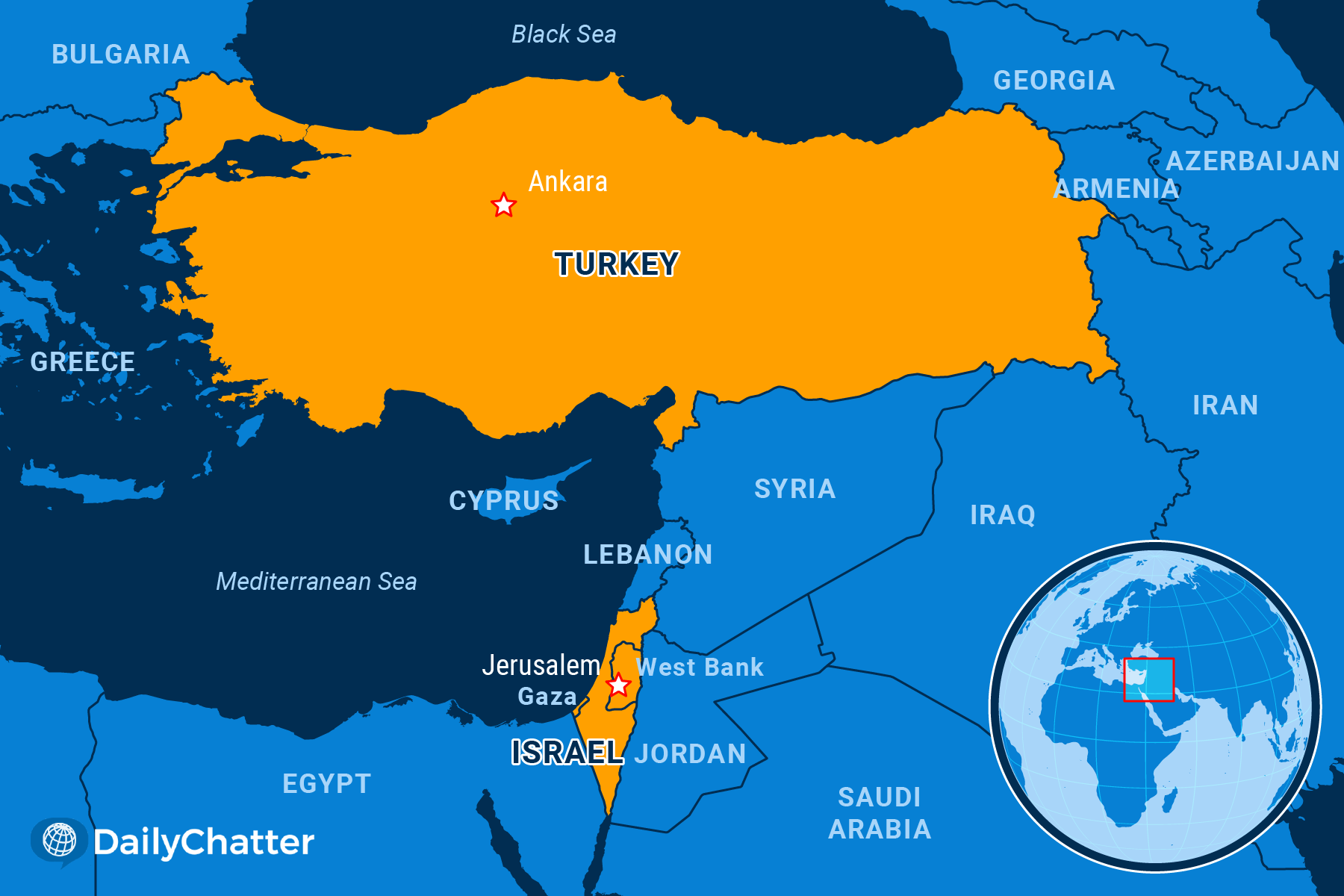 Israeli and Turkish officials said Wednesday they agreed to upgrade their relations to full diplomatic representation and reappoint ambassadors.

Relations between Israel and Turkey have had their ups and downs over the past decade, Axios wrote. But they took a nosedive in 2018 after 60 Palestinians were killed on the Gaza border by Israeli troops during demonstrations protesting the inauguration of the US embassy in Jerusalem.

Both countries expelled the others’ ambassadors at the time.

Over the past few years, both countries have been seeking to improve ties with other regional actors. Israel has normalized relations through the 2020 Abraham Accords with a number of Arab countries, including Morocco, the United Arab Emirates and Bahrain.

Meanwhile, Turkey has launched rapprochement efforts with other estranged rivals, including Egypt and Saudi Arabia.

Even so, Cavusoglu said that the decision to restore diplomatic relations did not mean that Ankara would abandon its support for Palestinians.

Kenyan Deputy President William Ruto won Kenya’s highly-anticipated presidential elections this week, even as his rival rejected the results and vowed to challenge the president-elect’s victory in court, the Wall Street Journal reported.

Election results showed that Ruto secured a razor-thin margin of 50.5 percent, defeating opposition leader Raila Odinga, who received less than 49 percent of the vote, the rest going to other candidates.

The closely watched vote attracted a lot of controversy after four of the seven members of the electoral commission expressed concern over the final result. They accused Commission Chairman Wafula Chebukati of concealing return data from other commissioners.

Police said there were no major incidents but noted that there were a few clashes between officers and Odinga supporters following the announcement of Ruto’s win. They added that a poll worker who vanished on Friday after leaving a tallying facility was found dead on Monday.

Odinga, meanwhile, said he would challenge the results in the country’s Supreme Court and urged his supporters to remain calm.

Despite the incidents and allegations of irregularities, international and local observers praised the vote itself as largely peaceful and the counting process as transparent.

Still, Odinga’s announcement has raised concerns that Kenya could experience post-election violence, similar to 2017: Odinga – who was also running for president at the time – succeeded in having the Supreme Court declare the results of the first round of voting invalid, only to lose the rerun election.

During the elections, police killed dozens of demonstrators.

Kenya remains a strong US ally in the fight against Islamist terrorist groups in Africa. The East African nation is also viewed as the economic powerhouse of the region and a pillar of stability compared with conflict-ridden neighbors such as Ethiopia and Somalia.

Chinese health officials unveiled new measures this week that would discourage abortions and make fertility treatment more accessible, in an effort to boost one of the world’s lowest birth rates, Reuters reported.

The National Health Authority said it would implement new support measures ranging from taxation and insurance to education and housing. It added that it would also promote reproductive health, as well as raise awareness while “preventing unintended pregnancy and reducing abortions that are not medically necessary.”

The authority would also guide local governments to include fertility treatments such as in vitro fertilization in their national medical system, which is very expensive and not available to unmarried women.

In 2021, China’s fertility rate was recorded at 1.16 births per woman – far below the 2.1 births per woman necessary to sustain a stable population number, according to the Organization for Economic Co-operation and Development.

Officials said the new measures are aimed at “promoting the long-term balanced development of the population.”

In recent years, the Chinese government has introduced incentives and measures, such as tax deductions, housing subsidies and enhanced medical insurance to boost population numbers, which declined dramatically, in part, from its ‘one-child policy’ that ran from 1979 to 2015.

In 2016, China scrapped it and allowed parents to have two children. Five years later, that was increased to three children.

Meanwhile, China has among the highest rates of abortion globally, according to the Guttmacher Institute, with 78 percent of unintended pregnancies ending in abortion, compared with the global average of 61 percent.

Some of these pregnancies were terminated to abort female fetuses because of a preference for males. As a result, the country has 35 million more men than women, the Washington Post reported.

Stars In The Sea

The novel artifact featured an image of Luna, the Roman goddess of the moon, and an image of the zodiac sign Cancer. The other side depicted Roman Emperor Antoninus Pius, who reigned the vast empire between 138 to 161 CE.

The Israeli Antiquities Authority explained that the novel artifact was minted in Egypt during Pius’ reign and was in “an exceptional state of preservation.” Its underwater location suggests that the coin was lost during a shipwreck.

The IAA noted that the relic was part of a series of 13 coins, 12 showing the signs of the zodiac and the last with a complete zodiac wheel, according to the Times of Israel.

Scholars said the depiction of the zodiac highlighted ancient Rome’s fascination with astrology. It was practiced by all classes of Roman society even though some superstitious emperors were not fond of it.

Instead, these rules viewed astrology with suspicion and hostility, fearing that astrological predictions could be used to undermine their authority.

But aside from its symbolism, the coin also showed that it was minted in the eighth year of Pius’ reign, whose rule is remembered as one of the most peaceful eras of the Roman empire.