Near the prime minister’s office in The Hague, the seat of the government of the Netherlands, lies the Koediefstraat (Cow Thief Street).

Perhaps it was the Koediefstraat that inspired the Dutch government’s latest measure to combat climate change and reach the country’s climate goals, the Economist wondered.

Regardless, Dutch Prime Minister Mark Rutte recently proposed new limits on nitrogen emissions from fertilizer, manure and other carbon-heavy farm inputs and outputs as part of a plan to cut Dutch nitrogen, a major polluting by-product of agriculture, by half over the next eight years. As a result, farmers need to reduce their number of cows and pigs by almost a third.

The farmers, understandably, are not happy. They have protested, in June bringing cows to parliament to show their displeasure, Bloomberg noted. The Netherlands has more than 100 million cattle, chickens and pigs, the densest concentration of livestock in Europe. Who, the farmers asked, would produce the food to feed people if officials cut 30 million animals from their food supply?

“We don’t want the system to collapse,” Marije Klever, a dairy farmer in Utrecht, told the Guardian. “I am a landowner, so a critical question is whether the government (is) allowed to push farmers out of the land. It can’t be The Hague telling farmers they must go, you need an agreement.”

The massive size of Dutch herds is one reason the country is among the largest per capita emitters of greenhouse gases, however, France 24 countered. Cow burps – yes, belching cows – contribute significant amounts of methane, a greenhouse gas 28 times more potent than carbon dioxide. Dutch scientists are now experimenting with different feed that could reduce the amount of methane that the gassy animals emit.

Dutch farmers, the fifth largest exporter of dairy products in the world, are also running out of space to store cow manure, Treehugger has previously Now they’re worried about groundwater contamination and ammonia emissions that also contribute to climate change.

The conservative British newspaper, the Spectator, argued that Rutte’s cow proposal was an example of how not to roll out climate change initiatives. The writers suggested that Rutte could have met with them and crafted an agreement they could accept rather than deliver shock therapy in pursuit of climate goals.

Rutte, incidentally, recently became the Netherlands’ longest-serving prime minister. His popularity, wrote Reuters, is “a testament to his energy for the job – as well as the political survival skills he has honed over his 12-year tenure.”

He’s got his work cut out for him.

Nowhere To Go But Down 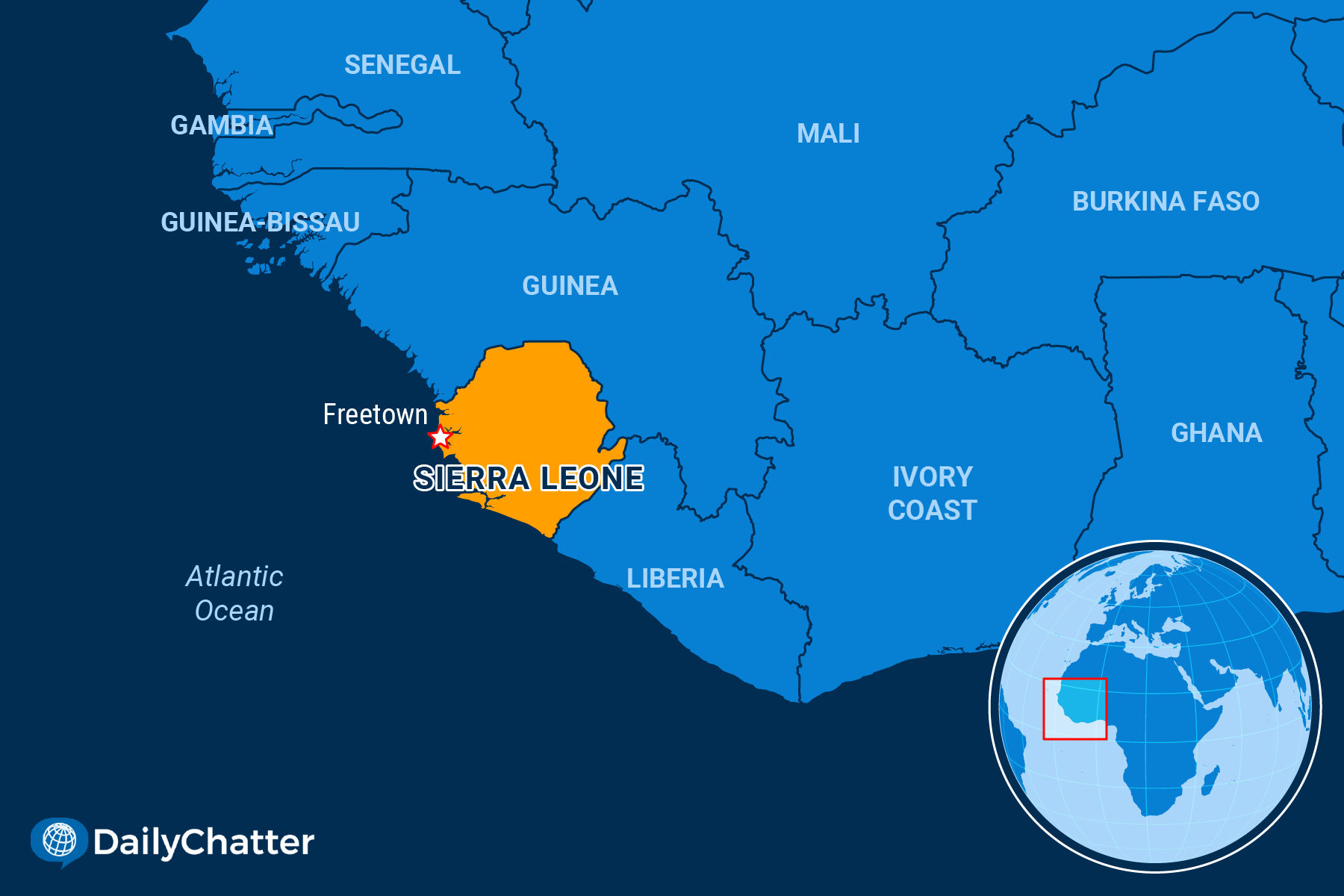 Hundreds of protesters clashed with security forces in Sierra Leone’s capital of Freetown this week, in a deadly protest over rising inflation and mounting costs of living in one of Africa’s poorest countries, CNN reported.

Anti-government demonstrators took to the streets to lament the country’s economic situation and the perceived lack of government support for ordinary people struggling to meet their basic needs. Analysts said the protests had been brewing for days but escalated Wednesday and into Thursday. At least 21 protesters were killed in Freetown, reported CNN, and six officers died in anti-government protests in northern and western Sierra Leone, officials told Reuters. The toll is likely higher, analysts added.

Over the past two decades, Sierra Leone has struggled to recover from a devastating 11-year civil war that killed 50,000 people and destroyed the economy. Currently, more than half of the population of about 8 million lives in poverty, according to the World Bank.

A Chinese appeals court dismissed a landmark case over sexual-harassment allegations by a woman against a famous TV host, a ruling that dealt a major blow to China’s embattled #MeToo movement, the Wall Street Journal reported.

The case began in 2018 when Zhou Xiaoxuan accused Zhu Jun, a prominent television presenter, of sexually harassing her when she was interning at state broadcaster China Central Television in 2014.

Zhu denied the allegations and countersued Zhou for defamation.

Last year, a lower court rejected the case because of a lack of evidence. On Wednesday, the appeals court upheld the ruling, saying the evidence was “insufficient.”

Zhou said that is uncertain whether she will appeal. However, she said she hoped the proceedings would raise awareness about sexual misconduct and give judges more insight into the difficulties Chinese women face in pressing these claims.

Zhou’s accusations were a catalyst for the then-fledging #MeToo movement in China, a country where sexual-harassment cases face a high burden of proof, and women who make such allegations usually face counter defamation suits from the accused.

Allegations of sexual misconduct have become extremely sensitive in the Asian country, especially after tennis star Peng Shuai openly described a relationship with former Chinese Vice Premier Zhang Gaoli, a relationship that she described as at times coerced.

After disappearing from public view following the accusations, Peng later claimed that she had never accused anyone of sexual assault and that “there’s been a lot of misunderstanding.”

A South African parliamentary inquiry is investigating a bizarre case of theft connected to President Cyril Ramaphosa to determine whether he should be impeached in what is becoming a growing scandal rocking the country, South Africa’s Daily Maverick reported.

Parliament Speaker Nosiviwe Mapisa-Nqakula said an independent panel will assess the evidence from the Phala Phala case, referring to Ramaphosa’s Phala Phala game farm. The panel will then determine whether to impeach Ramaphosa, as the opposition requested.

The case centers on an accusation made in June by the country’s former State Security Agency chief, Arthur Fraser: He accused the president of kidnapping, bribery, money laundering and “concealing a crime” over the alleged theft of $4 million from the Phala Phala farm in 2020.

At the heart of the case are allegations against the president’s housekeeper who is accused of stealing money she found hidden in furniture at the farm’s main residence. Ramaphosa, returning from abroad, asked his head of security, Maj. Gen. Wally Rhoode to investigate. They recovered the stolen money from the housekeeper and her alleged co-conspirators, Al-Jazeera reported.

However, Fraser claims that the president kidnapped and questioned those involved in the robbery, paid each nearly $10,000 for their silence, and waited one month before reporting the burglary. Ramaphosa has faced calls to explain what happened. So far, he responded to questions made by the country’s ombudsman but the answers have not been made public, according to Bloomberg.

Meanwhile, South Africa’s News24 reported on Wednesday that the burglars took $600,000 in cash, instead of the alleged $4 million, without citing any sources.

Political parties have until Sept. 1 to nominate candidates to serve on the panel. Analysts say the impeachment is unlikely to move forward. However, in South Africa, when a party in parliament calls for impeachment, it triggers a mandatory investigation into whether the president is guilty of a serious violation of the law or serious misconduct.

For centuries, green crabs have been the bane of North America’s marine ecosystem.

The invasive crustaceans came to the New World as stowaways on European ships around the 19th century. Since then, they have been devouring shellfish, as well as ruining estuaries and fish habitats in North America.

Efforts to fight them have been mildly successful, but a New Hampshire distillery has come up with a novel solution to curb their population, NPR reported.

Tamworth Distilling figured that they could make a green crab-flavored whisky and recently unveiled their new product, “Crab Trapper.”

Product developer Will Robinson explained that the crustaceans are properly cleaned and prepared before they are turned into crab stock. The company then distills the stock using a vacuum still – a glass machine that allows temperature control.

The stock is then mixed with spices and then combined with a bourbon base.

Robinson described the beverage as a “thinking, sipping” drink.

“It’s meant for you to explore your own perception through your olfactory senses,” he added.

Each whisky bottle uses about a pound of crab. The company hopes that the special spirit can pique customers’ interest.

While marine scientists cautioned that one distillery will not have a major impact on the crab population, they said that such creative projects help raise awareness of the problem. Gabriela Bradt, a fisheries specialist at the University of New Hampshire, said “the more people hear about it, then we get more and more people who might have a really great, innovative idea that we haven’t touched upon.”