An Iranian engineer recently died and another employee was wounded in an “unexplained incident” at the Parchin military complex where International Atomic Energy Agency officials previously believed the country had been conducting research on nuclear weapons.

As CBS News explained, the US and other countries levied sanctions against Iranian leaders in Tehran to stop them from manufacturing nuclear weapons. In 2015, the two sides reached a deal that would have suspended the country’s nuclear program. US President Donald Trump pulled out from the accord in 2018, however. Feeling betrayed, Iran has since surpassed the accord’s production limits.

The deadly incident occurred as former Swedish Prime Minister Carl Bildt and Javier Solana, the ex-secretary general of NATO and the EU’s high representative for foreign affairs, wrote an op-ed in the Washington Post warning of a coming crisis with Iran unless the US gets the nuclear deal back on track.

American officials have been negotiating with their Iranian counterparts in Vienna for months. But the top US envoy to the discussions recently said the chances of reviving some aspects of the 2015 nuclear deal were “tenuous at best,” reported CNN.

The envoy spoke on the same day that the US issued new sanctions on Iran in retaliation for the Islamic Revolutionary Guard Corps-Quds Force illegally selling hundreds of millions of dollars worth of Iranian oil. The US has also confiscated Iranian oil in tankers that were allegedly flouting US sanctions.

Speaking to CNN’s Fareed Zakaria at the World Economic Forum in Davos, Iranian Foreign Minister Hossein Amir-Abdollahian insists that American officials must lift sanctions if they want to sign a new accord, as Reuters wrote. Amir-Abdollahian also claimed that the “Zionist” influence in American politics was preventing an accord, according to the Jerusalem Post.

Iran can afford to play hardball. Despite infrastructure problems – consider this building collapse reported by the BBC – the high price of oil and closer relations with another international rogue state, Russia, have buoyed the regime’s hand, Bloomberg noted.

Even so, the regime is under pressure to deliver relief from spiking prices and shortages that have led to deadly protests in recent weeks.

That said, the historic anti-Semitism from Iranian leaders is one reason why Israeli officials are becoming more antagonistic toward them. Recently, agents from Israel’s intelligence service, the Mossad, assassinated Iranian Colonel Hassan Sayyad Khodaei, a Revolutionary Guard leader, in Tehran in broad daylight. The killing was a sign of how deeply the Mossad has penetrated Iran’s security apparatus, Haaretz argued.

Israeli officials, meanwhile, thought it was a mistake for the US to pull out of the 2015 nuclear accord, Axios added.

Regardless, as the Conversation noted, it’s important to get the deal back on track and rein in Iran’s nuclear program. That’s likely only possible with concessions – and good faith – on both sides.

Trudeau’s proposed legislation will focus on fighting gun smuggling and trafficking, while it also would implement a “red flag” law: This would allow courts to order individuals to surrender their firearms to police if they are considered a danger to themselves or others.

The bill will also require rifle magazines to be permanently altered so they can never hold more than five rounds.

The legislation will go through parliament this fall and is expected to pass.

Canada already restricts access to firearms. Even so, officials plan to tighten access further, with a ban on 1,500 types of military-style firearms.

Officials described the bill as the most significant step Canada has taken in a generation. Trudeau said during a press conference that the issue is “about freedom,” adding that Canadians “should be free to go to the supermarket, their school or their place of worship without fear.”

However, Conservative opposition and Canadian gun groups criticized the freeze as “absurd.” They noted that authorities already have tools to tackle gun violence, such as contacting people listed as references on gun license applications. 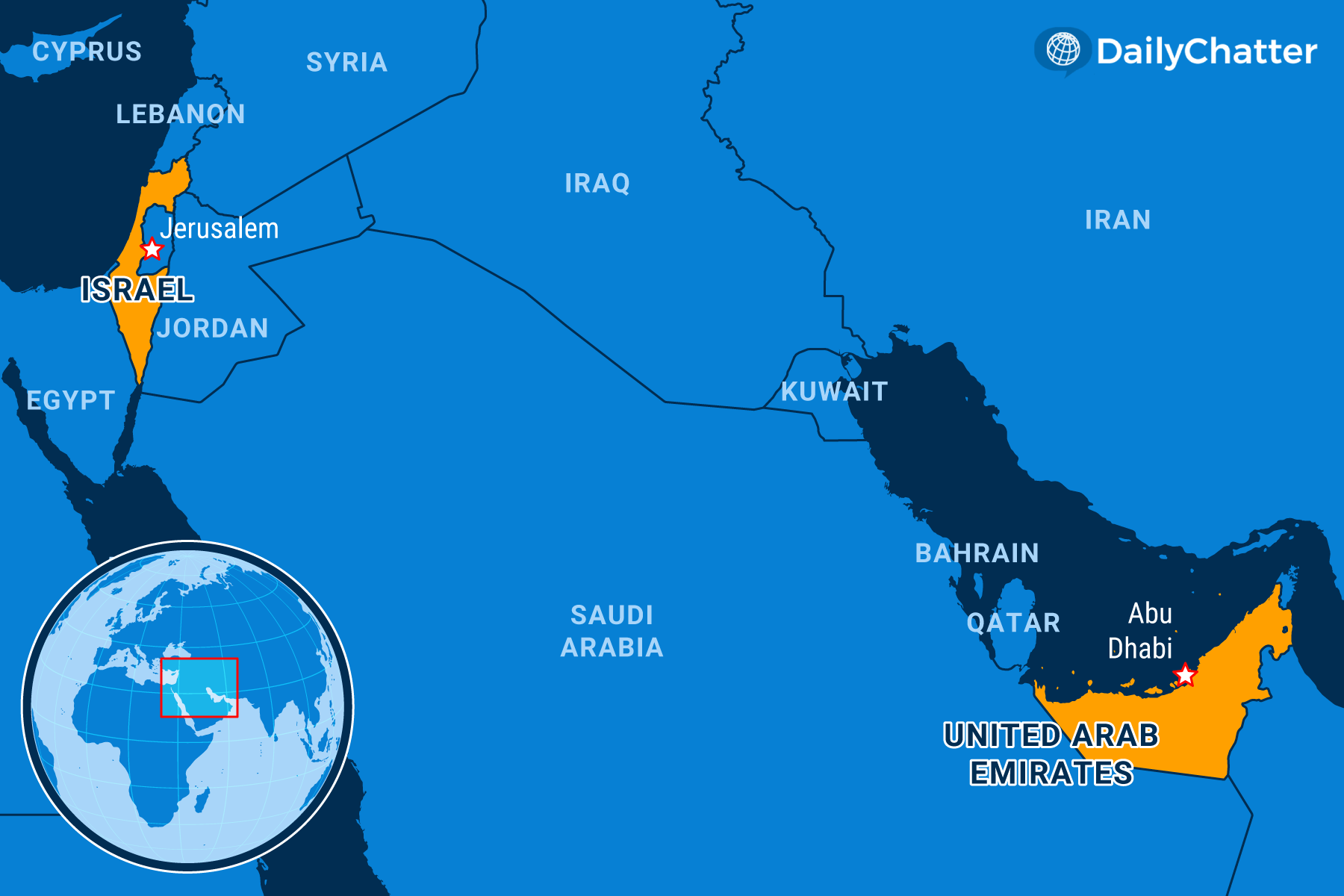 Israel and the United Arab Emirates signed a free-trade agreement Tuesday, a landmark deal that will boost business ties and comes less than two years after both nations normalized relations in a US-brokered deal, the Wall Street Journal reported.

The agreement will cover 96 percent of bilateral trade between the two Middle Eastern countries, totaling around $1 billion. Officials said the historic deal will extend ties beyond the diamond business – which accounts for more than 50 percent of the two countries’ official bilateral trade – and covers a number of sectors, including food, technology and cosmetics.

They expect trade to increase by more than $10 billion within five years.

Observers explained that the free-trade agreement shows the durability of the Abraham Accords, a series of diplomatic deals in 2020 that normalized relations between Israel and four Muslim countries, including Bahrain and Morocco. The accords are seen as a breakthrough in relations between Israel and its Arab neighbors, which have remained strained for decades because of the ongoing Israeli-Palestinian conflict.

Negotiations over the trade deal began in November and were finalized in April. Analysts noted that the deal was not particularly affected by the spiking tensions between Israelis and Palestinians recently, amid a series of terrorist attacks in Israel and Israeli military operations in the West Bank.

Hundreds of Congolese protesters took to the streets of the capital to protest against Rwanda this week, blaming the neighboring country for allegedly supporting a notorious rebel group responsible for a recent uptick in violence in eastern Congo, Radio France Internationale reported Tuesday.

Demonstrators called for the expulsion of Rwanda’s ambassador and displayed nationalistic banners against ceding any Congolese territory to its neighbor.

The two countries have had strained relations after many Rwandan ethnic Hutus, accused of killing Tutsi during the 1994 Rwandan genocide, fled to eastern Congo. In 1996, Rwanda invaded eastern Congo to pursue the alleged Hutu killers, according to Reuters.

In 2019, tensions between Rwanda and Congo decreased following the election of Congolese President Felix Tshisekedi. But recent violent skirmishes between the rebel group M23 and Congolese forces, as well as the arrest of two Rwandan soldiers by Congolese troops over the weekend, have heightened tensions.

This weekend, both countries suspended flights with each other.

Congo’s government has accused Rwanda of supporting M23 – which is mostly made up of Congolese Tutsis. Rwanda has denied the accusations and called for the release of its two soldiers.

It has also accused the Congolese army of cooperating with the Democratic Forces for the Liberation of Rwanda (FDLR), a militia founded by ethnic Hutus who fled Rwanda in 1994.

Meanwhile, eastern Congo remains in a constant state of conflict due to foreign invasions and insurgencies by rebel groups. The United Nations warned that 72,000 have been displaced because of the violence.

Sleeping will become tougher as the climate gets warmer, according to a new study.

Danish researchers found a connection between hotter weather and poor sleep in areas around the world, NPR noted.

In their study, scientists studied data from tens of thousands of smartwatches and wristbands of individuals located in different parts of the globe. They then compared information about when people fell asleep and woke up with data about local weather.

But they observed that this effect was felt unequally: This impact is felt more among women, people in lower-income or hot-climate countries and the elderly – whose bodies don’t produce enough sweat to cool their bodies.

With climate change further increasing temperatures and the risk of heatwaves, the authors wrote that “each person could be subjected to an average of two weeks of temperature-attributed short sleep each year.”

The lack of sleep can contribute to major physical and mental problems, including cognitive performance, compromised immune system and depression.

Still, the paper notes that installing air conditioning in households could solve the sleep problem but cause economic and environmental challenges, according to National Geographic.