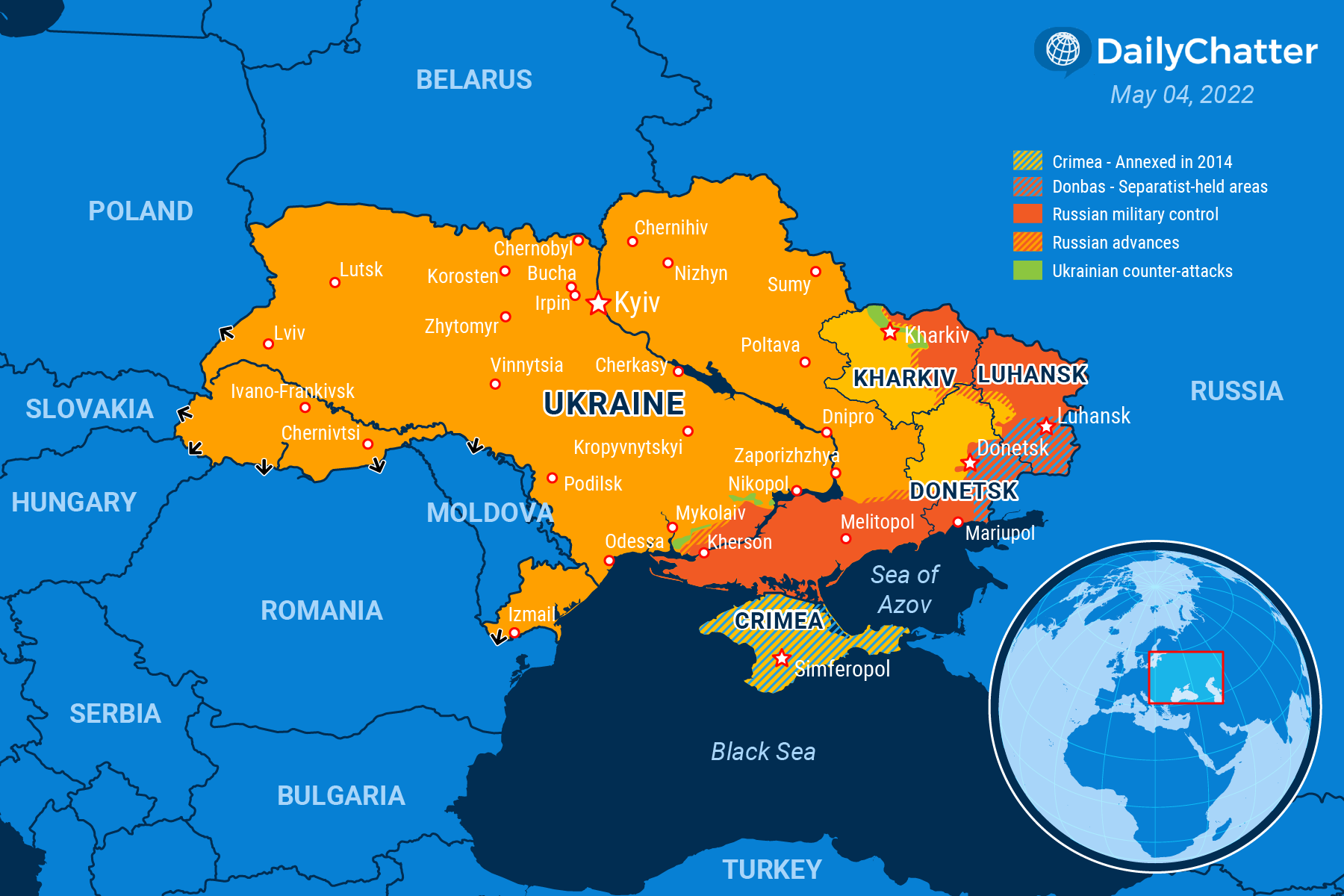 Officers with Ukraine’s Security Service (SBU) recently seized a man in Sloviansk, a city in the country’s Russian-dominated eastern region, for allegedly collaborating with Russian forces that have invaded the East European country.

“What did he ask you for?” a security officer asked the man after he was detained.

“Coordinates, movements and so on,” the man said, according to CNN. “The locations of the hits. That sort of thing. The situation in general…”

Russia’s invasion of Ukraine has become an artillery duel between the two sides, the Guardian reported. As the fighting has transitioned to these new tactics, on-the-ground intelligence has become more valuable, especially in zones where Ukrainian troops have pushed out Russian aggressors. The shift led Ukrainian forces to launch an unprecedented crackdown on espionage.

In the town of Ivanivka near the Russian border, a 66-year-old woman identified only as Olena lamented how her neighbor has fired flares that helped Russian troops attack Ukrainian forces. She notified the SBU who began investigating. That situation isn’t uncommon these days.

“In small towns and villages across Ukraine that fell under Russian occupation in February and March and have since been liberated, the fog of war has been replaced by the fog of conspiracy and suspicion,” wrote the Washington Post.

In late April, Ukrainian security officials arrested 400 people around Kharkiv under anti-collaboration laws that Ukrainian lawmakers enacted soon after Russia’s invasion in late February, the Associated Press reported. Those laws impose punishments ranging from two years in prison for distributing Russian propaganda in schools to 15 years for joining Russian military groups, the US Library of Congress explained. Collaborating in actions leading to Ukrainian deaths could mean life in prison.

Officials in Kyiv are investigating 10 residents in the Bucha region who they suspect collaborated with Russian troops committing war crimes in that city, the Canadian Broadcasting Corporation added. They suspect collaborators helped Russian troops track down and kill Ukrainians Russian leaders believed might cause trouble – local politicians, combat veterans, Ukrainians in defense forces and others, as the Kyiv Independent wrote.

The Russians thought the Ukrainians would welcome them with open arms. Some of those who did are now paying the price, along with Ukrainian unity.

Preliminary results showed that Labor secured 72 seats in the lower house of parliament, while the Liberal-National coalition won 54. The final results are expected late Monday. Meanwhile, it’s unclear if Labor will win the 76 seats needed to form a majority government.

Regardless, Labor leader Anthony Albanese is poised to become Australia’s next prime minister. His party has pledged to deliver tax relief to more than nine million Australians through cuts that would benefit anyone earning more than $31,000 per year.

It has also vowed to build tens of thousands of new social and affordable housing units over five years. Albanese also tried to appeal to women by pledging to close the gender pay gap and improve their career options.

Analysts noted how the coalition’s loss followed eroding support for Morrison over his poor handling of national crises and criticism of his leadership qualities. Morrison had especially come under fire for taking a vacation during the 2019 wildfires and vaccine delays during the coronavirus pandemic.

Meanwhile, smaller parties and independent candidates performed strongly – projected to win about 11 seats – detracting from the overall support for the major parties.

Among the many challenges Albanese will face is China’s increasing influence in the Pacific region: Labor intends to build a defense school to train Pacific island security forces, as well as to enhance South Pacific foreign aid by nearly $370 million over the next four years.

The Liberal-National coalition had tried to paint Labor as China’s ally during the election campaign. Albanese’s party, however, criticized Morrison for failing to prevent a recent security deal between China and the Solomon Islands.

In the Hot Seat

Former German Chancellor Gerhard Schröder resigned as chair of the board of Russian state energy giant Rosneft over the weekend amid tremendous pressure in Europe to eschew the income from Russia or face sanctions, the Washington Post reported.

Rosneft said in a statement that the former Social Democratic leader found it “impossible” to continue in the role for which he has earned $600,000 a year since 2017. The company added that he was “invaluable” in implementing large-scale infrastructure projects in Russia and Germany.

His resignation followed efforts by the European Union and its allies to sanction Russian figures and entities following Moscow’s invasion of Ukraine.

Last week, the European Parliament supported a non-binding resolution urging the EU to extend sanctions to “the European members of the boards of major Russian companies and to politicians who continue to receive Russian money.”

Meanwhile, German lawmakers approved a decision to strip Schröder of his taxpayer-funded office and staff granted to him as a former chancellor. Even so, this decision is being legally reviewed, according to German media.

Even so, the former chancellor remains on the board of Nord Stream 2, the company that built the controversial, now-defunct gas pipeline between Russia and Germany – it was suspended recently. At the same time, Gazprom, another Russian energy company, had nominated Schröder to its board in February but it’s unclear if he will take up the role following the European Parliament’s resolution.

Schröder served as Germany’s chancellor from 1998 to 2005 and is considered a close friend of Russian President Vladimir Putin. He was integral in deepening Germany’s dependence on Russian energy: During the 2005 election, he signed a letter of intent with Putin to build the Nord Stream 1 gas pipeline, the first Baltic gas pipeline between Germany and Russia. He became head of Nord Stream’s board of shareholders three weeks after he left office, a move that caused an uproar in Germany.

He was also instrumental in developing the $11 billion Nord Stream 2 pipeline that directly connected Russian oil fields to Germany. The idea of expanding Europe’s reliance on Russian energy was divisive in the continent, and the project was a source of contention between Germany and the United States. Two days before Russia invaded Ukraine, current German Chancellor Olaf Scholz blocked the pipeline’s approval.

Still, Schröder has refused to condemn the Russian invasion or disavow his friendship with Putin.

British Prince Charles and his wife Camilla, Duchess of Cornwall, ended their three-day tour to Canada this week, a visit that was marked by acknowledging the plight of the country’s Indigenous community, especially past wrongs, the Canadian Press reported.

Charles’ and Camilla’s visit was part of the events for Queen Elizabeth’s Platinum Jubilee and came a year after the discovery of a number of mass graves near Canada’s controversial residential schools for Indigenous children.

Following a private meeting with leaders of the Yellowknife Dene First Nation, Charles said he was deeply moved to have met survivors of the residential schools.

The British prince acknowledged the suffering of the survivors of the schools but stopped short of issuing an apology that many Indigenous leaders have demanded.

Charles implored Canadians to continue the process of reconciliation with Indigenous peoples, which is one of Prime Minister Justin Trudeau’s major concerns, the New York Times noted.

While some Canadians and Indigenous leaders described the visit as “just another PR event,” others noted that the question of a royal apology is important and complex because royals traditionally avoid becoming involved in politics.

Still, in a country where demonstrators against the mistreatment of Indigenous people have toppled statues of British monarchs – including Elizabeth – many believed the couple should have apologized.

“It was the whole colonial power structure that was responsible for the residential school system,” Grand Chief Stewart Phillip, president of the Union of British Columbia Indian Chiefs, told the Washington Post.

Still, analysts added that their visit was well-received compared to a recent tour by Prince William and his wife Kate, Duchess of Cambridge, to Barbados, Jamaica and the Bahamas, where they were greeted with protests, criticized for perpetuating images of colonial rule and asked for apologies and reparations for the slave trade.

In November, Barbados became the first commonwealth country in nearly three decades to renounce the queen as head of state and become a republic. Jamaica, Antigua and Barbuda are considering such a move, the Post said.

Scientists finally figured out why a chemical in sunscreen is harming coral reefs, Smithsonian Magazine reported.

Oxybenzone has been used in sunscreen products to protect against strong ultraviolet rays but some studies have shown that it can cause skin allergies and disrupt hormone functions, according to the American Cancer Society.

In a new study, researchers at Stanford University tested the effects of the substance and sunlight on anemones, which are closely related to corals. They also studied how oxybenzone affected the sea creatures with their algae and without.

The team observed that the anemones converted the chemical within their cells by combining it with glucose – or sugar – when exposed to sunlight. This process, however, turned the oxybenzone into a toxin, which eventually killed the animals.

The findings showed that all the anemones exposed to oxybenzone and sun died within 17 days, while those only exposed to the chemical survived.

The researchers also noted how the algae provided some defense against this process: Anemones with algae survived for more than two weeks, while the ones without only lasted a week.

A number of jurisdictions have moved to ban oxybenzone-containing sunscreens, while researchers are working on more environmentally-friendly alternatives.

Still, other scientists noted that changing the composition of sunscreens won’t have as much impact as mitigating climate change, pollution and overfishing – the three factors that have contributed to the loss of half of the world’s reefs since the 1950s.