Populist Italian politician Matteo Salvini had egg on his face recently after a press conference in the Polish town of Przemysl, a destination for many refugees from Russia’s invasion of Ukraine. Recalling that Salvini had praised Russian President Vladimir Putin as a great statesman, right-wing Mayor Wojciech Bakun angrily unfurled a T-shirt featuring Putin’s face and the slogan “Army of Russia” – a shirt Salvini had once worn – and invited the Italian lawmaker to accompany him to the border to “See what your friend Putin has done.”

The Italian, taken aback and visibly affronted, made a hasty retreat.

Similar stories are cropping up throughout Europe and beyond as leaders who were once chummy with – or admiring of – Putin, are now distancing themselves from the leader who started a brutal war and has threatened the use of nuclear weapons.

Marine Le Pen, the French far-right leader, and her political party, the National Rally, has praised Putin in Moscow and received money from Russia, Politico reported. She visited the Kremlin during her recent presidential campaign and supported the annexation of Crimea in 2014. Before late February, she dismissed the idea of an invasion as she released a campaign brochure showing herself shaking hands with Putin. In recent weeks, though, Le Pen issued a statement that condemned Russia’s attack, calling it “unjustifiable without reservations,” and pleaded for its “immediate end.”

Russian money has played a large role in the country garnering the favor of Western elites. “There is a very clear financial benefit in dealing with Putin, especially at the time European money comes with questions about freedoms of media, human rights and corruption, which Putin doesn’t care about,” Hungarian member of the European Parliament Katalin Cseh told CNN.

But even Hungarian Prime Minister Viktor Orban, who has likely been the most pro-Putin leader in the European Union and whose country has benefited from Russian and Chinese investment, has turned negative about Putin’s actions in Ukraine. Hungary condemned Russia’s armed offense and has allowed NATO responses on its territory, though it has stopped arms from entering into Ukraine through Hungary, noted CNN.

Hungarian elections in April likely play a role in the about-face, added Cseh, who says Orban will have to “walk the tightrope of his traditional voters, after having told them for years that ‘the EU is the enemy and Putin is a great guy.'”

Unlike his European counterparts, Brazilian President Jair Bolsonaro, another conservative populist, has been reluctant to denounce Russia. Other Brazilian politicians and especially the Brazilian delegate to the United Nations have done it for him, Reuters wrote.

And while Putin uses the terminology of the far-right politicians outside Russia’s borders – or vice-versa – when he “defends conservative values” or says “Russia is being cancelled,” it’s also the left beating a retreat in the wake of the war: Many far-left politicians in Europe had also praised or defended Putin, often in reaction to American dominance on the world stage, for example, German lawmaker Sahra Wagenknecht from The Left party or France’s far-left presidential candidate Jean-Luc Mélenchon.

In Germany, before the war, a significant portion of the public believed the Ukraine crisis was caused by NATO because members of the left often spoke publicly about the Western alliance’s so-called aggression. “NATO has expanded, not Russia,” Sevim Dağdelen, a leading member of the Left said in mid-February. A few days later, Wagenknecht said on national television that the US is attempting to “conjure up” an invasion with “aggressive rhetoric.”

Still, in terms of impact, it’s France that has seen the most political fallout from the war as it heads to presidential elections on April 10. Since the invasion, incumbent Emmanuel Macron, who has positioned himself as “Europe’s wartime leader,” has surged in the polls, the Washington Post wrote. Meanwhile, Mélenchon, Le Pen and also far-right candidate Éric Zemmour have all faced blowback from their obsequiousness toward Putin. French media, meanwhile, has been relentless in airing videos of Zemmour, already a deeply controversial figure, highlighting his leanings toward Putin even as he denounces the invasion and praises the Ukrainian leader.

While many of Putin’s foreign friends step away for the moment, one stands stalwartly by – China – a country likely also to respond to Russia’s appeal for help, as the Financial Times detailed. The US has warned China to not enter the fray. China has made clear that it does not want to lose out due to American sanctions against Russia. According to the Guardian, expectations are that Chinese aid will start flowing. The repercussions from that are yet unclear but they will probably be a lot more consequential than an egg on a face.

The family of a Pulitzer Prize-winning photojournalist killed during the Taliban takeover of Afghanistan last year petitioned the International Criminal Court (ICC) Tuesday to bring the Islamist group up on charges of war crimes and crimes against humanity, the Washington Post reported.

Indian photojournalist Danish Siddiqui was killed on July 16, a month before the Taliban entered Kabul as foreign troops withdrew from Afghanistan.

The petition cites reports from various Indian and international outlets claiming that Siddiqui was alive when the Taliban captured him. He was later executed and his body mutilated, according to the reports.

His family says that Siddiqui was subjected “to barbaric levels of torture and mutilation while in their custody.” The Taliban, however, denied that his body was mutilated in their custody.

Observers said the plea is likely to gain the attention of the ICC, whose investigation into war crimes in Afghanistan has stalled since it authorized a probe in March 2020.

Following the Taliban takeover, the court’s prosecutor urged the ICC to resume the probe, citing the “the gravity, scale and continuing nature of alleged crimes by the Taliban and the Islamic State.”

The petition also comes as journalists are emphasizing the dangers that reporters face in covering conflicts and the difficulties of seeking accountability for their deaths. In recent weeks, at least five journalists – two American reporters, three Ukrainian journalists and a British cameraman, have been killed covering Russia’s invasion of Ukraine.

According to the Committee to Protect Journalists, more than 500 journalists have been slain over the past decade, 31in Afghanistan.

Officials of Afghanistan’s deposed civilian government told the Post in 2020 that the Taliban were responsible for the majority of the targeted killings of journalists. 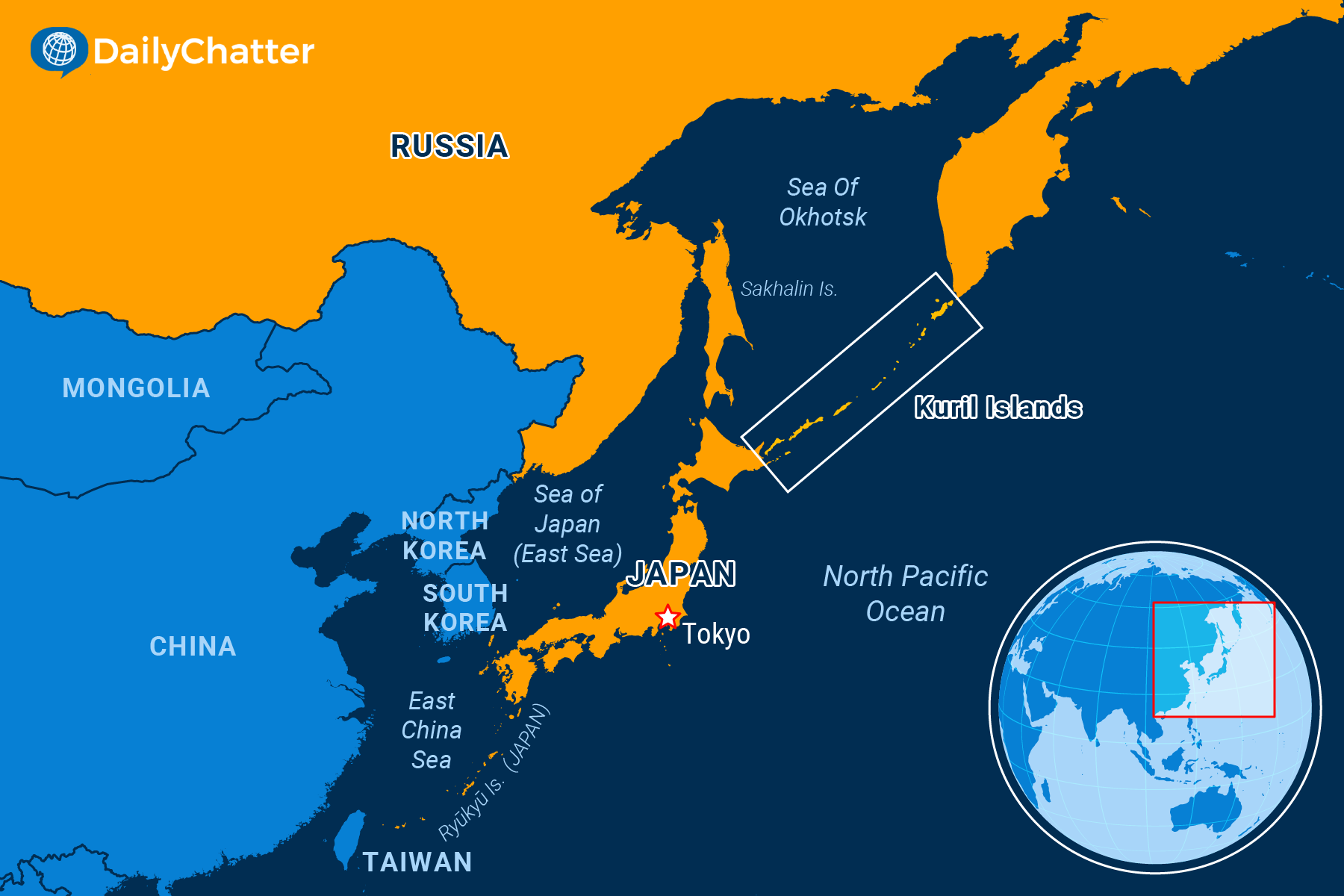 Even though WWII ended more than seven decades ago, Russia – then part of the Soviet Union – and Japan still have yet to sign a peace agreement to formally end the conflict. One of the unresolved issues between the two countries remains competing claims over territorial rights to the Kuril Islands.

Soviet troops seized the islands in the final days of the war and expelled thousands of Japanese residents living there.

Former Japanese Prime Minister Shinzo Abe held 25 meetings with Russian President Vladimir Putin between 2012 and 2020 in an effort to resolve the dispute. But the negotiations have made little progress, particularly after Russia introduced constitutional amendments that made it illegal to surrender any part of its territory, according to Bloomberg.

But following Russia’s incursion of Ukraine, Japan swiftly imposed sanctions on Russia and stripped Moscow of its most-favored-nation trade status.

Russian officials said Monday they canceled the talks, adding that Japan has taken “an openly hostile position and is striving to cause harm to the interests of our country.”

Canada’s ruling Liberal Party reached an agreement with the opposition New Democratic Party on Tuesday, a deal that will allow Liberal Prime Minister Justin Trudeau to stay in power until the 2025 elections, the Associated Press reported.

The agreement will provide stability for Trudeau’s party, which won the September snap parliamentary polls but failed to secure a majority in the legislature.

Trudeau said the leftist NDP will support his party in exchange for deals on pharmaceutical and dental care plans. Meanwhile, the NDP will not place a lawmaker in Trudeau’s cabinet and will not have a veto on budgets or any other legislation.

The prime minister noted that the agreement will allow the government to “function with predictability and stability, present and implement budgets and get things done for Canadians.”

Still, the opposition Conservative Party criticized the deal as a “power grab.”

Analysts said the agreement will provide stability and promote further left-leaning spending priorities, such as medical drug coverage. They added that it was also another indication of Trudeau’s intentions to continue his tenure as prime minister.

Trudeau has said that he plans “on continuing to serve Canadians through and beyond the next election.”

Even so, political observers noted that there are doubts that Canada’s second-youngest prime minister will continue his winning streak amid a drop in popularity and intense criticism in much of western Canada.

In recent months, anti-vaccine protesters and truckers gridlocked the capital, Ottawa, over Trudeau’s measures against the coronavirus pandemic. Many called for his government’s ouster.

Scientists recently discovered a tiny marine predator that could be the “secret weapon” in fighting climate change, according to Sky News.

A research team found the single-celled microbe isolated from waters off the coast of Sydney, Australia. Named Prorocentrum cf. balticum, the small predator uses photosynthesis and generates a carbon-rich mucus-like substance to attract and trap other microbes for consumption.

Once it’s done feeding, the microorganism dumps the carbon-rich mucus, which sinks – because of the weight of surplus prey trapped inside – to the bottom of the ocean and adds carbon back into the oceans’ carbon-cycling system.

The team explained that the marine microbe is contributing to the process of transporting carbon from the ocean’s surface to deeper levels, known as vertical carbon export, and carbon sequestration – the process of trapping and storing atmospheric carbon dioxide.

Both these processes are important in controlling global temperature, Newsweek reported. And this microorganism’s work is a first for scientists – previous studies have highlighted the role that planktons play in storing carbon dioxide but not that of other microbes.

Researchers estimate that the new microbe can sink up to 0.15 gigatons of carbon each year, adding that it could become “a game-changer in the way we think about carbon and the way it moves in the marine environment.”

Scientists believe that humanity needs to remove 10 gigatons of carbon dioxide from the atmosphere every year from now until 2050 in order to reach climate targets.