When Russian President Vladimir Putin invaded the former Soviet republic of Ukraine late last month, he claimed he was pushing back against aggressive Western powers that were impinging on Russian interests. If that was Putin’s strategy, it arguably backfired. A great awakening has spread across Europe as nations have banded together, abandoned their pacifist inclinations and strengthened their defenses under the banner of democracy and human rights.

“The EU’s illusions about the nature of the Russian threat to Europe have crumbled,” wrote the Financial Times. “Where European capitals once favored dialogue, they have turned to deterrence.”

Germany’s decision to spend more than $100 billion on defense in a one-shot expenditure and boost annual military spending to the two percent of the gross domestic product that NATO members are supposed to allocate to their militaries, as Deutsche Welle explained, is perhaps the greatest sign of the change that has occurred on the continent.

But it’s not the only one. European countries have overhauled their policies toward Russia, the Washington Post noted. They banned Russian-controlled media in the European Union, enacted tough sanctions on Russian institutions and, perhaps most importantly, spent EU funds to give Ukraine weapons.

Additionally, Poland, Bulgaria and Slovakia are working on giving their Russian-made fighter jets to Ukraine – a potential game-changer in the country’s fight against Russia. As NBC News noted, they want assurances that the US will allow them to buy modern American jets to replace the ones they lose, however.

Even neutral countries like Finland and Sweden are getting into the act. NATO leaders are now including the two countries in their deliberations, according to Defense News. More than half of the Finnish public and more than 40 percent of Swedes now support joining the alliance. Neutral Switzerland, meanwhile, has joined the US and EU in imposing economic sanctions on Russian elites, Radio France Internationale reported.

Perhaps Putin has effectuated a self-fulfilling prophecy regarding a Europe unified against his homeland, the Los Angeles Times claimed. The Encyclopedia Britannica defined the psychology behind the concept as an “originally false expectation [that] leads to its own confirmation.” The idea is that Putin prophesized European aggression, took actions to counter it in Ukraine and thereby forced Europeans to become more aggressive, fulfilling his worst fears.

British journalist Peter Hitchens would disagree. Writing in the Daily Mail, he argued that such analyses ignore the West’s and Ukraine’s role in ratcheting up tensions with Russia over the years.

Either way, the possibility of World War III in Europe is more real than ever. Putin has described economic sanctions as the equivalent to “declaring war,” noted National Public Radio. Calls for a Western-imposed no-fly zone over Ukraine, for example, could force Russian jets to fight NATO jets in the sky over the country, warned Jacobin, a leftist magazine.

The Russian president might be assuming that Europe won’t spark a war in order to defeat aggression, violence and authoritarianism. He could be wrong. But he also might be harboring a death wish.

South Korean firefighters and troops battled a large wildfire over the weekend that tore through the country’s eastern coastal area, forcing thousands to evacuate and threatening two energy facilities in the region, the Associated Press reported.

The fire began Friday morning near the seaside town of Uljin and spread across more than 14,800 acres to the nearby city of Samcheok. More than 6,200 people have been evacuated and at least 159 homes and 46 other buildings have been destroyed.

The government deployed about 7,000 firefighters, troops and public workers, as well as 65 helicopters and more than 500 vehicles to contain the blaze.

The wildfire also threatened to spread to a liquid natural gas production facility and a nuclear power plant near Uljin but authorities were able to prevent the blaze from hitting them.

So far, no casualties have been reported. Officials said they are investigating the cause of the blaze.

Chile will create a large national park to protect the country’s hundreds of glaciers melting because of climate change, Agence France-Presse reported.

The new National Glacier Park will cover more than 185,000 acres of the Andes mountain about 40 miles from the capital, Santiago.

Outgoing President Sebastian Pinera hailed the park as “a fundamental step that our country is taking to combat the destruction of nature.” He said the initiative will protect 368 glaciers, as well as preserve species native to the region, such as pumas and foxes.

The president added that the glaciers hold 32 times more water than the reservoir that serves Santiago’s seven million population.

The park’s establishment comes amid global concern that the warming climate is melting glaciers around the world. A study by the University of Chile found that glaciers in the central part of the country – where the park is also located – are shrinking because of global warming.

Chile ranks among the top 10 nations in the world in terms of glacier surface area. The list also includes Canada, the United States, China and Russia. 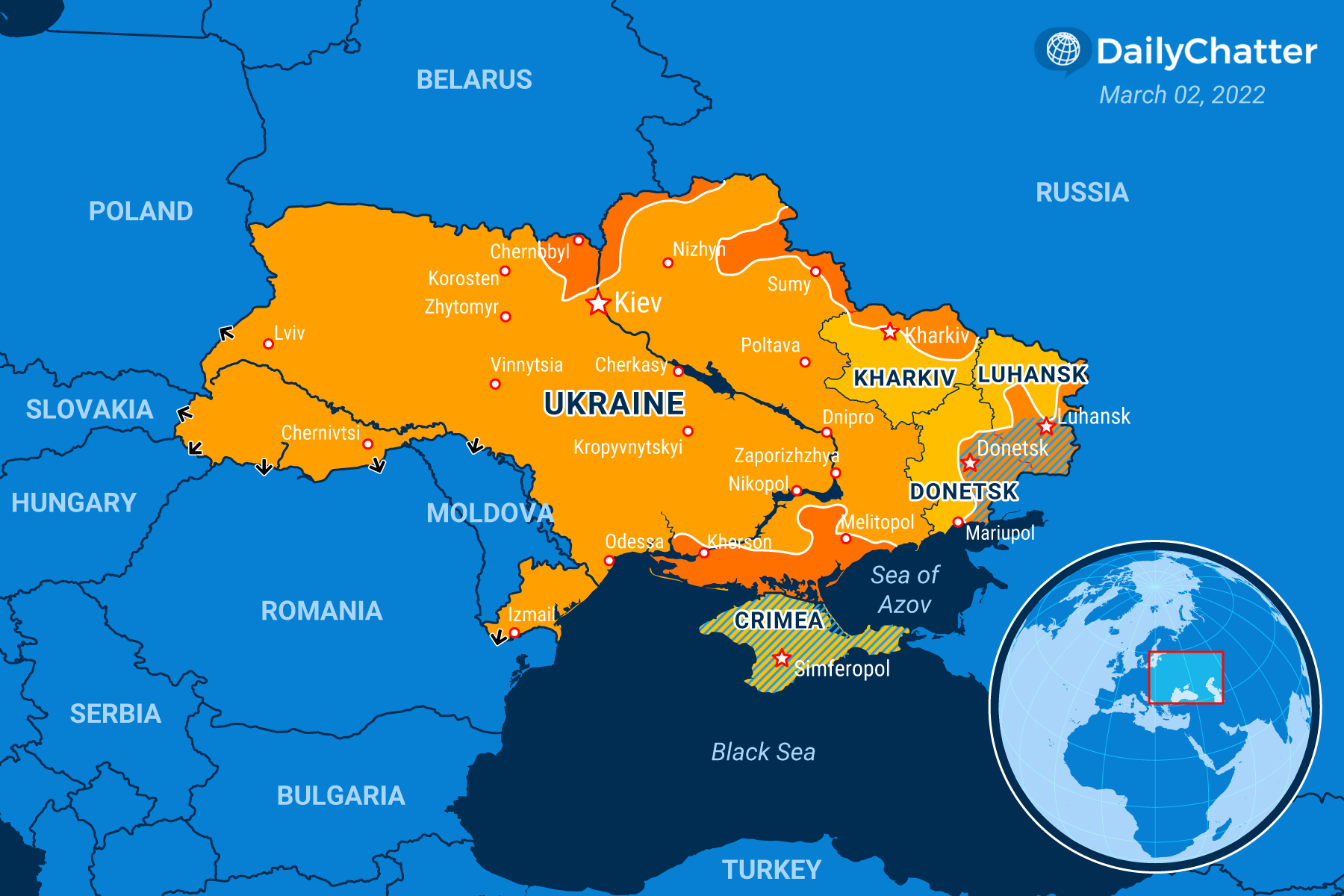 The Russian invasion prompted many Ukrainians to take up arms and learn guerilla tactics to defend their country against their larger neighbor.

Google data showed a spike in searches for “how to make a Molotov cocktail,” with the search interest being considerably high in the northeastern regions first attacked by Russian forces, including Ukraine’s second-largest city of Kharkiv, the Washington Post reported.

The improvised hand grenade is made by pouring flammable liquid into a glass bottle and plugging it with a cloth that will act as a “fuse” before setting it on fire.

So far, thousands of Molotov cocktails have been made, using soda, wine and beer bottles. Some bottles are filled with grated Styrofoam, which is said to make the flaming liquid sticky.

Molotov cocktails were first documented to be used in 1936 during the Spanish civil war but their famous name – along with heavy usage – came during the Soviet Union’s invasion of Finland during the Second World War.

The Finnish army employed the device as a way to repel Soviet forces and named it after Soviet Foreign Minister Vyacheslav Molotov.

Molotov had claimed that Soviet planes bombing Finland were actually dropping humanitarian supplies and that the army was “liberating” the country. The Finns thus called the bombs “Molotov’s Picnic Baskets.”

The device was later used in Hungary in 1956, when dissident Hungarians rebelled against the oppression of the Soviet-backed government, prompting the Soviet Union to send tanks to quell the unrest.

To this day, Molotov cocktails have become the go-to weapon for rebels, agitators and citizen soldiers, and sometimes protesters.

For some Ukrainians such as 19-year-old Evgeny Belinkyi, it’s an important weapon: “I came here to defend my land,” he said. “To defend my homeland, my loved ones.”