Ukraine means “borderland” in Slavic languages. Today, the fate of the country could determine a new frontier between Eastern and Western Europe.

That’s because when Russian President Vladimir Putin ordered Russian troops to roll into two separatist regions in eastern Ukraine on Monday after recognizing them as independent states – eight years after Russia annexed the Ukrainian territory of the Crimea – he threw down a gauntlet.

The breakup of the Soviet Union in 1991 after the end of the Cold War, particularly the separation of the former Soviet republics of Russia and Ukraine, was a humiliation that, in the mind of leaders like Putin, permanently hobbled Russia. As the Wall Street Journal explained, Putin wants to renegotiate the terms of that peace.

Putin claims, for example, that American and European leaders promised that they would never expand NATO into former Warsaw Pact countries in Eastern Europe or the former Soviet Union, the Council on Foreign Relations wrote. Western leaders dispute that view. But there is no doubt that NATO has grown and has more members on Russia’s borders.

Deploying Russia’s vaunted military, betting that Europe won’t want to challenge the invasion due to the continent’s dependence on Russian energy and creating instability to demonstrate the fragility of the US-led Pax Americana – these are the strategies deployed by Putin to show that Russia is a first-rate power, noted the New York Times.

That China recognized Russia’s legitimate security concerns in Ukraine, as the Washington Post reported, reflects how Putin – and Chinese authoritarians, too – are seeking to challenge a planet where elites in Hollywood, Silicon Valley, Washington, Wall Street and the Berlin-London-Paris triangle have long held sway.

One might sympathize with the Russian leader if he didn’t sit atop a regime that, as Freedom House detailed, routinely violates human rights, controls the media, stokes corruption and organized crime and suppresses political dissent.

Nobody believes NATO wants to fight Russia over Ukraine, though many fear the possibility of a broader war because powerful nations often stumble into conflicts that escalate.

For now, the West is responding with sanctions that appear to be tougher than any that came before. Germany, for example, surprised many when it halted approval of the Nord Stream 2 gas pipeline, CNN reported. While cutting off that energy supply will hurt Germany, it will also prevent Russia from receiving vital foreign currency that props up its economy.

The US imposed tough sanctions on Russian banks and elites and banned the Russian government from raising money or rolling over its sovereign debt on American or European markets, Politico added. Those moves only scratch the surface of the Russian economy, however, Reuters claimed. Russia has lived with sanctions for years and has stockpiled resources to get through another round. Even so, these measures could just be the first of a series of sanctions that eventually could cripple the country, especially if and when the price of oil falls.

A waiting game has begun. At present, Putin’s troops are sticking to the eastern Ukrainian regions where Russia was already in control. If they stay put, talks and economic harm can continue. If the troops press on to Kyiv, sanctions will be weak tea for Ukrainians who aspire to join the world that Putin is trying so hard to upend. 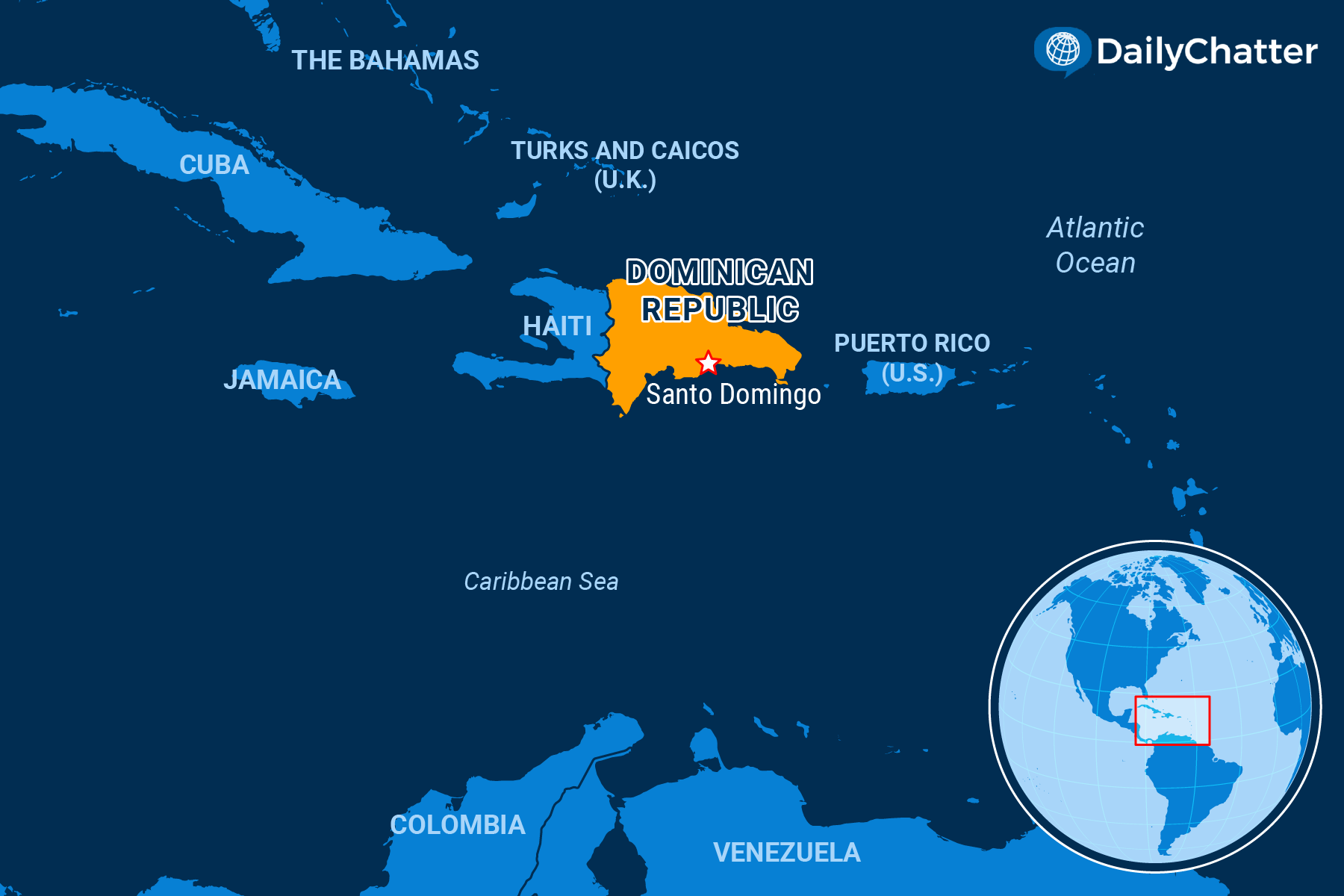 The Dominican Republic began construction of a wall along its border with Haiti this week in an effort to halt the smuggling of goods, weapons and drugs, Reuters reported.

The wall will stretch nearly 122 miles and includes the construction of 70 watchtowers and 41 access gates. It will also be fitted with cameras, motion sensors and radar, according to officials.

President of the Dominican Republic Luis Abinader said the barrier will help reduce the number of illegal migrants crossing the border from Haiti and fight organized crime in both nations, Sky News noted.

Though inhabitants of the same small island, the two countries differ greatly in terms of stability and development: Haiti, the hemisphere’s most impoverished country, is currently facing skyrocketing crime rates and political instability following the assassination of President Jovenel Moïse last year. Meanwhile, the Dominican Republic remains a popular tourist destination and has prospered in recent years.

Many Haitians have crossed the border to the Dominican Republic in search of work in the fields and in construction. A 2018 immigration survey found that about 500,000 Haitians and tens of thousands of their descendants live in the country of nearly 11 million people.

The commencement of the wall’s construction comes just a week before the anniversary of the Dominican Republic’s independence from Haiti, on Feb. 27, 1844.

A Japanese court ruled Tuesday that the government must compensate three disabled people who underwent forced sterilization under the now-defunct eugenics protection law, the first ruling in which damages have been awarded to plaintiffs, the Japanese-based Kyodo reported.

The Osaka High Court said the government must pay a total of nearly $240,000 in damages to a couple and a woman in their 70s and 80s. The court also recognized that the controversial eugenics law was unconstitutional.

Between 1948 and 1996, the legislation authorized the sterilization of people with intellectual disabilities, mental illnesses or hereditary disorders to prevent the births of “inferior” offspring.

Government data showed that about 25,000 people with disabilities had undergone sterilization under the law, including 16,500 who had operations without their consent.

Lawmakers abolished the law in 1996 and more than two decades later enacted a bill authorizing $28,000 in compensation to those forcibly sterilized.

Many courts have reinforced the unconstitutionality of the abolished law but have rejected demands for compensation, saying the 20-year statute of limitations had expired.

Colombia became the latest Latin American nation to decriminalize abortion after the country’s Constitutional Court ruled this week to allow the procedure in the first 24 weeks of pregnancy, Axios reported.

The landmark ruling came after years of campaigning by women’s rights groups and changing trends in the Catholic-majority region regarding abortion. In September 2020, activists filed a lawsuit saying that the laws governing abortion were unfair to women.

Colombia’s current legislation allows the procedure in cases of rape, when it risks the mother’s life or when the fetus is unviable. All others who undergo the procedure face up to four and half years in prison.

About 400 women are charged annually – 20 percent of those are minors, government figures show. About 70 women die annually due to unsafe abortions.

Women’s rights advocates hailed the decision as historic “not only for Colombia but for all Latin America” because it establishes that abortion should be eliminated from the penal code.

The move makes Colombia the fourth Latin American country to decriminalize abortion, according to the Hill.

A walk in nature is good for you: A 2019 study found that more than two hours per week outside can improve a person’s general health and well-being,

Now, doctors and other licensed healthcare professionals in four Canadian provinces are providing “nature prescriptions” to their patients as part of the novel PaRX program, according to CBC.

British Columbia’s Park Foundation, which originally launched the health initiative in 2019, recently partnered with Parks Canada to give doctors across four provinces an initial run of 100 passes to prescribe to patients.

As a result, healthcare workers registered with PaRX can offer their patients a Parks Canada Discovery Pass, which costs around $56 for an adult, free of charge. The program has urged doctors to prioritize passes to those who cannot afford them, NPR reported.

PaRx Director Melissa Lem told CBC that she hopes the prescriptions will facilitate access to nature for Canadians.

“We’re really asking them to prioritize patients who live close to Parks Canada sites so they’ll have more access and can make it part of their everyday lives, and also those for whom the cost of a pass might be a barrier to nature access,” she said.