A Race to the Bottom

Right-wing French presidential candidate Eric Zemmour recently described Roubaix, a town in northern France that is home to a large Muslim community, as “Afghanistan two hours from Paris.” A pundit and author, Zemmour was clearly playing to voters who are concerned about how immigration is changing France.

“French people who are Muslims must live in the French way and not consider that Sharia Law is superior to the laws of the republic,” he told France Inter Radio, according to Agence France-Presse.

Comments like those have made Zemmour the new bogeyman of the French left. Last month, a French court convicted Zemmour of hate speech for saying immigrants were murderers, rapists and other criminals who should be deported, wrote the Financial Times. He was fined more than $11,000 and faced 100 days in prison if he failed to pay.

Some of Le Pen’s colleagues don’t agree. According to Reuters, Jerome Riviere, who led the National Rally’s caucus in the European Parliament, and other party officials have switched their allegiance to Zemmour. European Parliament member Gilbert Collard said he didn’t have anything against Le Pen but preferred Zemmour’s “ideas.”

Last year, Zemmour was outpacing Le Pen in the polls. It looked then as if he could come in second in the April presidential election, meaning he would have likely faced incumbent President Emmanuel Macron in a run-off election. More recently, however, he has sunk to fourth place after Macron, Le Pen and conservative Valerie Pecresse, who recently also found herself in the crosshairs for talking about the “great replacement”: This phrase often used by Zemmour is “the false claim that the native populations of France and other Western countries are being overrun by non-White immigrants — notably Muslims — who are allegedly supplanting, and will one day erase, Christian civilization and its values,” the Associated Press wrote.

Meanwhile, Macron, who has yet to declare his candidacy, now has a 40 percent approval rating in part due to his imperious style, the Economist explained. Still, the conservative British magazine nonetheless predicted that Macron would likely win reelection. But winning reelection is hard for French presidents, Bloomberg added, owing to the country’s voting system and the fragmented electorate.

In foreign policy, Macron has pursued a more muscular role on the world stage. Domestically, however, he and France are struggling. In Auxerre in east-central France, for example, residents are worried about a lack of jobs and stagnant wages for those who can find work, the New York Times reported. Many worry, too, about immigration and crime.

Zemmour’s appeal, in other words, should surprise no one who has been paying attention, even those who shun him.

The Netherlands formally apologized to Indonesia on Thursday for war crimes committed by the Dutch army against its former colony during the latter’s independence war, Agence France-Presse reported.

The apology followed a four-year study by Dutch and Indonesian researchers which found that Dutch forces burned villages and carried out mass detentions, torture and executions during the 1945-49 war, often with tacit aid from the Dutch government.

Dutch Prime Minister Mark Rutte said he was sorry for the “systematic and extreme violence” by the country’s armed forces and for the “subsequent blind eye by various previous Dutch governments.”

The study shatters the long-held belief about the conduct of the Dutch army during the conflict: While officials have acknowledged isolated incidents of excessive violence, the mainstream view was that Dutch forces behaved themselves.

This is not the first time the Netherlands has apologized to Indonesia.

In 2020, Dutch King Willem-Alexander formally apologized during a visit to the country for “excessive violence” during the conflict.

The Netherlands had held Indonesia for more than 300 years: After the end of the Second World War, the Southeast Asian nation declared independence from the Netherlands. But the Dutch government wanted to retain power over the colony and sent troops to quell the independence uprising before withdrawing in 1949.

In 2015, a Dutch court ruled that the government must compensate the widows and children of Indonesian fighters killed by colonial troops. 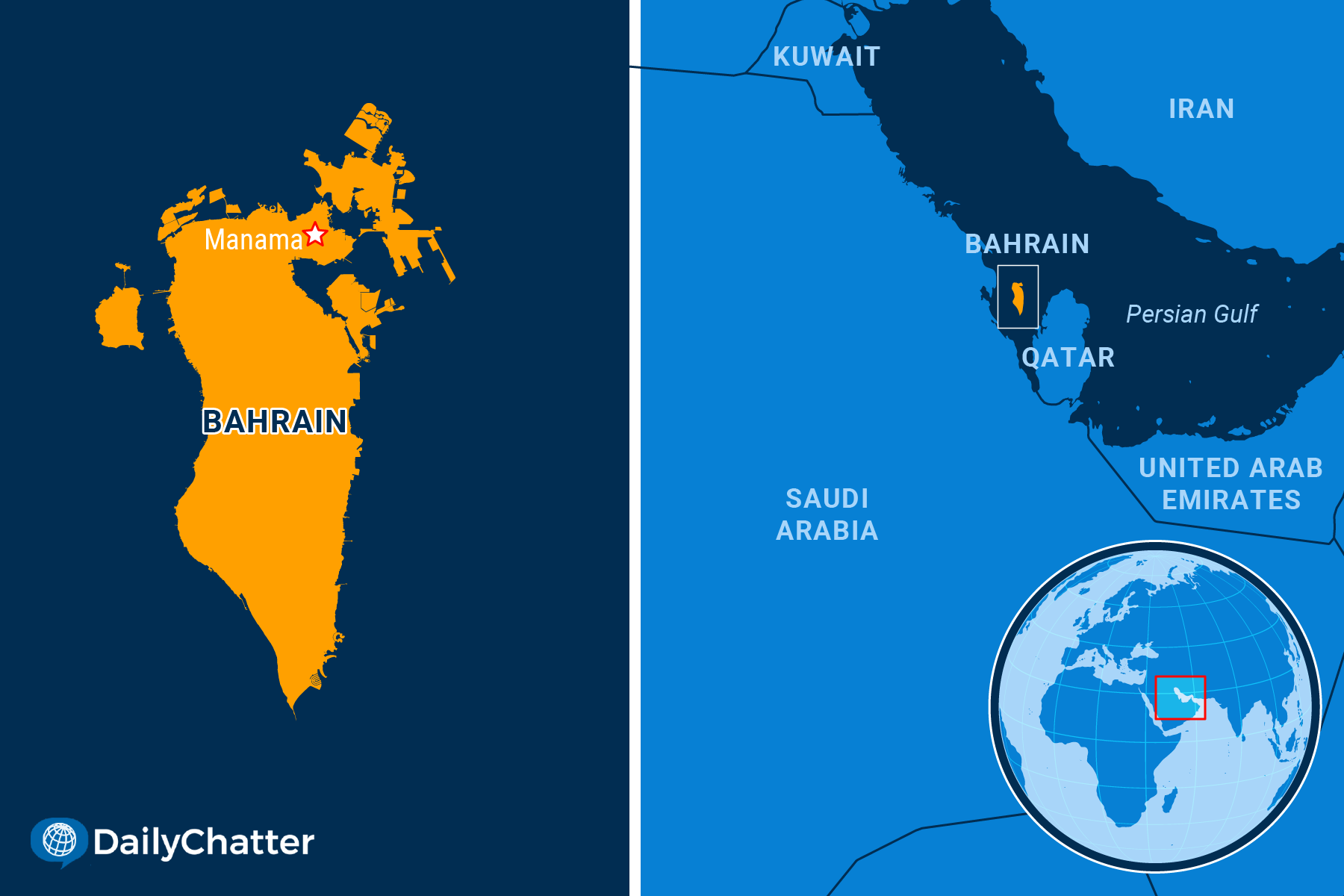 Officials said that the meeting was focused on “expanding strategic and security relations to address regional challenges, including nuclear threats, terrorist activity and religious extremism.”

Bennett and Al-Khalifa discussed ways to establish a regional alliance to counter Iran and other regional tensions. The visit came as world powers and Iran are currently trying to revive the 2015 nuclear deal.

One of the security issues discussed was Iranian-made armed drones used by militias in Iraq, Syria and Yemen, including in the recent attacks against the United Arab Emirates. Israeli officials said that Israel is sharing its experience in countering these drone attacks with its new allies in the region.

The two countries normalized their relations nearly two years ago after signing the Abraham Accords.

Bennett said during his visit that his purpose was to take practical steps to demonstrate to Bahraini and Israeli citizens that the Abraham Accords will benefit them.

The Weight of Words

Germany’s leading dictionary caused a stir this week after it altered the definition of the word “Jude” (Jew in German), prompting outrage from the country’s Jewish community, the Associated Press reported.

The Duden dictionary recently changed the explanation featured in its online edition saying that “occasionally, the term Jew is perceived as discriminatory because of the memory of the National Socialist (Nazi) use of language.”

Instead, it recommended using the terms “Jewish people, Jewish fellow citizens or people of the Jewish faith.”

But many members of the country’s Jewish community, including the Central Council of Jews in Germany, criticized the alteration. Many stressed that identifying themselves or being called Jews was not discriminatory.

The Central Council’s head, Joseph Schuster, also noted that the term was not a swear word, nor bigoted.

Following the outrage, Duden updated its definition again to reflect the Jewish community’s recommendations: It now said that the terms “Jew/ Jewess” (“Jude/ Jüdin” in German) are widely used and “not perceived as problematic.”

It added that the Central Council of Jews favors the use of the word.

During the Third Reich, the Nazis and their supporters murdered six million European Jews. The number of Jews in Germany was reduced from more than half a million to about 37,000 after the end of the Second World War, according to the United States Holocaust Memorial Museum.

After the collapse of the Soviet Union, around 200,000 Jews from Russia, Ukraine and other former Soviet states immigrated to Germany.

Drinking water to quench one’s thirst looks simple but a recent paper has suggested that there’s much more to it, NPR reported.

Researcher Yuki Oka and his colleagues recently studied mice to understand the brain science behind the complicated process.

Oka said that when we drink, water passes through a series of thirst-related “checkpoints” throughout the body and the brain: The first is in the mouth, which notifies the brain about the water’s “refreshing feeling” and the amount of fluid entering the body.

The next is in the intestines, where the water begins entering the bloodstream and where another checkpoint appears – which is the subject of the study.

Oka’s team analyzed the vessels that transport blood from the intestines to the liver and found cells that send messages up the vagus nerve – which connects the gut to the brain – when an animal hydrates.

They noted, however, that these cells weren’t sensing water but were responding to a hormone that’s produced when the fluid reaches the intestine and makes the contents less salty. Oka suggested that this intricate method of using a hormonal intermediary could make the brain more sensitive to subtle changes.

Kirsteen Browning of Penn State College of Medicine – who was not involved in the study – explained that the system is convoluted because our survival depends on “multiple layers of redundancy and multiple failsafe mechanisms that ensure proper hydration.”