Class is Sort Of in Session

More than half of Ugandan students stopped attending school at the beginning of the coronavirus pandemic in March 2020. Only recently did schools reopen, ending the longest school shutdown in the world. But few experts believe the move will result in much education.

Instead, a third of Ugandan students are expected to remain in the workforce to help their impoverished families make ends meet. “The damage is extremely big,” said the executive director of the education nonprofit Uwezo Uganda, Mary Goretti Nakabugo, in an interview with the New York Times. “We may have lost a generation.”

The social consequences of closing schools for more than a year are proliferating. Unwanted pregnancies, for example, have spiked among girls who might have avoided parenthood if they had been in class, CNN wrote. Teen mothers face higher chances of difficult childbirths and fewer opportunities for educational and economic advancement later in life. An Anglican bishop has called on Catholic schools not to enroll pregnant or breastfeeding girls, for example, wrote the East African, a Kenyan newspaper.

Many schools that were shuttered during the pandemic won’t reopen. In the capital of Kampala, more than 40 schools have closed permanently. Many have been turned into bars, restaurants or hotels, the Guardian reported.

And many teachers are unlikely to return because they’ve found other jobs. Ugandan teacher Florence Nankya turned to begging after her school stopped making payments at the outset of the lockdown. She took out a loan and started a fruit cart business. Now, she’s earning a good living and has reservations about returning to class, according to the Nile Post News, a local newspaper, via allAfrica.com.

Education is not the only sector where Covid-19 restrictions might be doing more harm than good in the landlocked East African country.

Virus testing fees for truckers caused gridlock on Uganda’s border with Kenya recently, the Associated Press reported. Truckers insisted they shouldn’t be forced to take the tests if they could prove they had tested negative in Kenya. Because landlocked Uganda has virtually no fuel sources of its own, shortages occurred as a result.

Ugandan President Yoweri Museveni’s government had to reverse its decision to require passengers to show proof of vaccination to board public transport after widespread criticism of the order and vows of defiance, added Deutsche Welle.

The president’s critics claimed that he could have done more to avert these disasters, the Associated Press reported. It’s hard to argue they’re wrong. An authoritarian who has been in office since 1986, Museveni appointed his wife as education minister.

Representatives of the Kurdish-led Syrian Democratic Forces said they took control of the prison in Hasaka after the IS fighters surrendered following days of operations.

Last week, more than 100 IS members stormed the detention center, where they freed many of their fellow militants and took control of a number of jail blocks. The facility is operated by the semi-autonomous Kurdish administration and houses about 3,000 prisoners, including hundreds of children, the Washington Post noted.

The fighting saw the deaths of more than 100 people – mostly IS militants – but the death toll could rise as Kurdish forces gain access to more parts of the prison. About 45,000 people in Hasaka were also forced to leave their homes because of the heavy fighting, according to the Wall Street Journal.

Meanwhile, human rights advocates expressed concern about the fate of about 700 children as young as 12 being held in the prison.

Though IS eventually lost the battle, analysts underscored that the attack was the most brazen assault by the jihadist group since it lost its last territorial enclave in Syria in 2019. They noted that IS could use the attempted prison break as a propaganda victory to attract and inspire followers around the world.

Lithuania is offering to sell a steel barn outside the country’s capital, Vilnius, that once served as an infamous “black site” used by the US Central Intelligence Agency to interrogate prisoners, the Guardian reported.

Known as “Project No. 2” or “Detention Site Violet,” the 10-room building served as a detention center between 2005 and 2006 and was part of the United States’ secret “extraordinary rendition” program.

The program involved the capturing of suspected Islamist militants from conflicts in Afghanistan and Iraq, who were later detained in jails outside US soil and subjected to what a US Senate report deemed to be torture.

Lithuanian Defense Minister Arvydas Anusauskas – who had led a parliamentary probe into the site in 2010 – told Reuters that “one could do whatever one wanted” in Site Violet.

A US Senate report on the CIA program found that the detainees who were brought to the Lithuanian black site had already been subjected to a great deal of “enhanced interrogation” – the agency’s term for torture.

In 2018, the European Court of Human Rights said that prisoners arriving at the black site were shackled, shaved and blindfolded or hooded.

Among those detained was Abu Zubaydah, who was captured in Pakistan six months after the 9/11 attacks. He was suspected of being a senior member of al Qaeda, but it turned out he was not part of the organization.

Earlier this month, the Lithuanian government awarded him more than $110,000 in compensation for the treatment he received at the site.

Zubaydah is currently being held in the Guantanamo Bay detention camp. 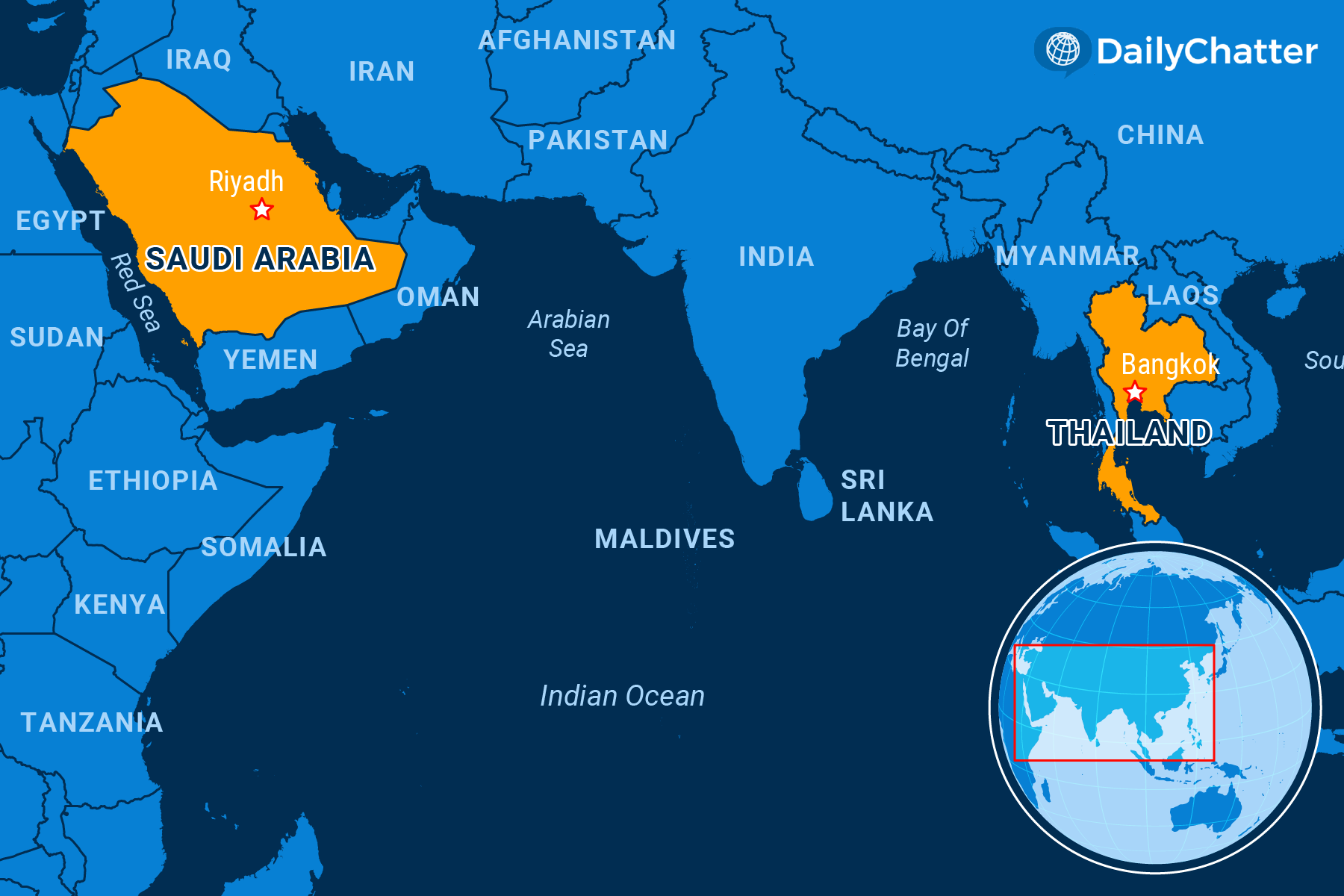 Thailand and Saudi Arabia agreed to restore full diplomatic relations for the first time in more than 30 years, Bloomberg reported Wednesday. The two countries broke off ties following the theft of jewels from a Saudi prince in 1989.

The agreement was reached at a meeting between Thai Prime Minister Prayuth Chan-ocha and Saudi Crown Prince Mohammed bin Salman in the Saudi capital, Riyadh.

This was the first visit by a Thai leader to Saudi Arabia since the nations severed ties following an infamous jewelry heist in which a Thai janitor working for one of the Saudi royals stole millions of dollars of valuables, including a 50-carat blue diamond.

Subsequently, three Saudi diplomats seeking the valuables’ return were killed in the Thai capital. Later on, a Bangkok-based Saudi businessman believed to be investigating the jewels also disappeared and has since been presumed dead.

No one was convicted of the murders, and the whereabouts of the diamond remain unknown.

During their meeting, Prayuth expressed “his sincere regret” over the case, adding that Thailand had “exerted utmost efforts” to resolve the investigation and it stands ready to review it if new evidence emerges.

Both leaders agreed to appoint new ambassadors in the future, as well as to cooperate to reinforce economic and trade relations in a number of areas, including renewable energy and cybersecurity.

The restoration of diplomatic ties will also allow thousands of Thai workers to take up jobs in various Saudi Arabian business sectors, such as construction and hospitality.

A six-year investigation zeroed in on the person who most likely betrayed Anne Frank and her family to the Nazis in the Second World War, the Guardian reported.

Led by former FBI agent, Vince Pankoke, the investigators named Arnold van den Bergh – a Jewish notary in Amsterdam, in the Netherlands – as the prime suspect in a cold case that has spanned for nearly 80 years. Van den Bergh was a member of the city’s Jewish council, an administrative body created by the Nazis to carry out their policies, the investigators said.

Anne Frank – famously known for her diary – had been hiding with her family for two years in a concealed annex around the Jordaan area of Nazi-occupied Amsterdam before being discovered on Aug. 4, 1944.

The young girl died in February 1945 at the age of 15 in the Bergen-Belsen concentration camp, in Germany. Only her father, Otto Frank, survived the war.

Pankoke said that multiple leads made Van den Bergh a person of interest: Following the war, Otto received an anonymous note claiming that the notary had betrayed him. The probe also revealed that a member of the Jewish council was turning over lists of addresses of where Jews were hiding to the Nazis, according to Newsweek.

Lastly, Van den Bergh and his family lived for the remainder of the war in Amsterdam and were never deported to any death camps.

The notary was also mentioned in a 1963 probe, but his possible role in the betrayal didn’t appear to be fully investigated.

Pankoke opined that Van den Bergh could have given up the list to save his own family and admitted that the evidence is not exactly a “smoking gun.”

Scholars have argued that the evidence against Van den Bergh is not conclusive, and the foundation set up by Anne Frank’s father criticized the investigation as “full of errors,” Reuters noted.