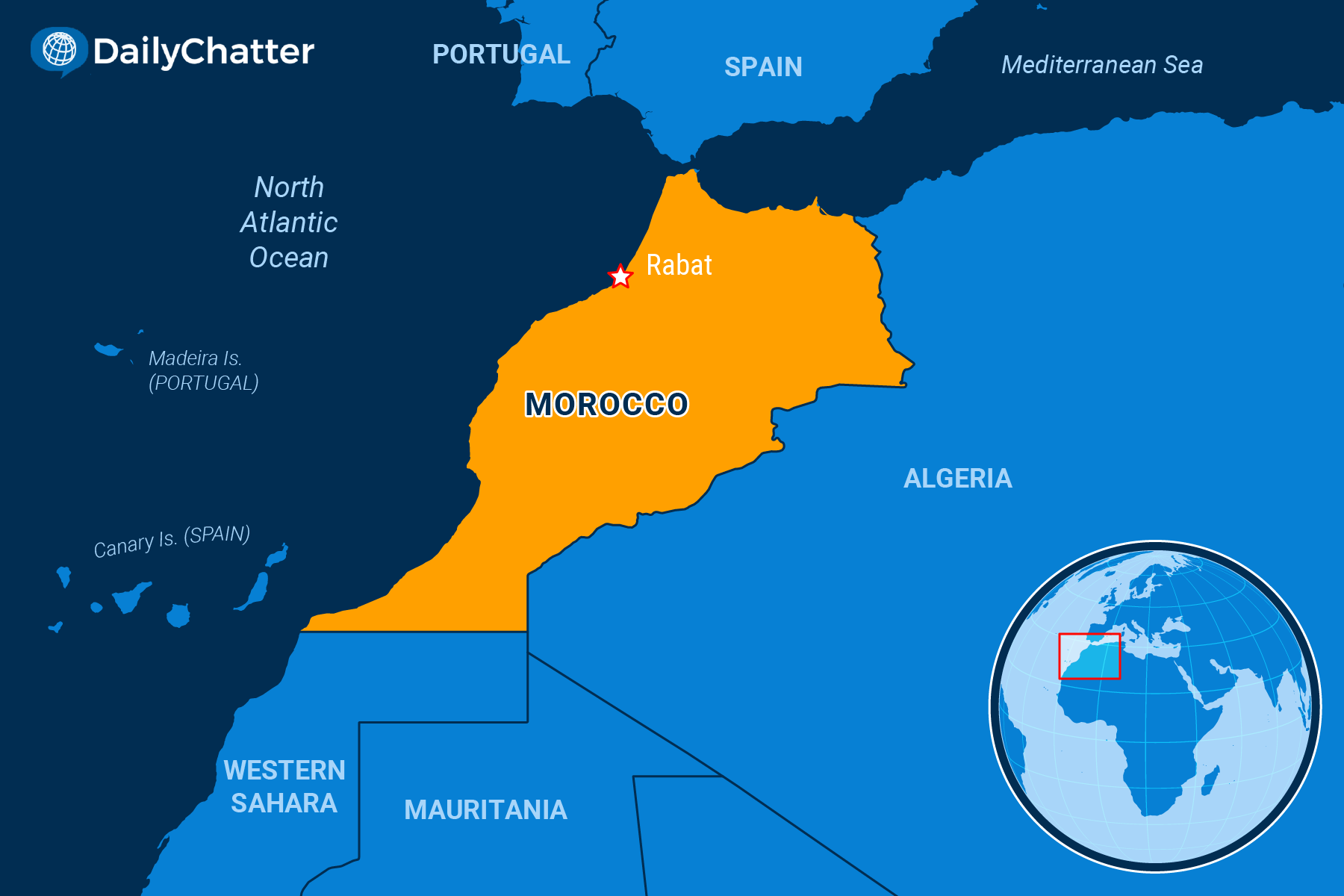 Moroccan King Mohammed VI recently denounced “methodical attacks” on his country, alluding to critics abroad who have raised questions about the kingdom’s policies in the disputed territory of the Western Sahara, the alleged use of Israeli spy software in civil rights violations as well as its policies in North Africa.

The comments, as Africanews and Agence France-Presse reported, made the king sound paranoid. But he’s right to say that Morocco faces challenges on all fronts.

In the Western Sahara, tensions have been escalating between Morocco, which claims the former Spanish colony along Africa’s Atlantic coast, and Polisario Front, a militant group seeking independence.

According to Bloomberg, the Front last year abandoned a 30-year ceasefire and began launching attacks against Moroccan forces. Front leaders claim that a referendum brokered by the UN on the territory’s status should occur under the ceasefire but it has yet to happen. Morocco has deployed increasingly sophisticated weaponry in the region, too, DefenseNews wrote.

Independence advocates, meanwhile, claim that Moroccan officials have unjustly cracked down on them in a bid to suppress dissent.

“The authorities forced me into a police car and took me to a nearby police station, where I was interrogated, sexually assaulted, and told to go home and not to speak to anyone,” wrote Sultana Sidibrahim Khaya in a CNN opinion piece where she called for President Joseph Biden to rescind US recognition of Morocco’s claim to the Western Sahara. Khaya recently was placed under house arrest.

Morocco’s relations with its eastern neighbor, Algeria, are also declining. Algerian President Abdelmadjid Tebboune cut off diplomatic relations recently and ordered his forces to the Moroccan border after he blamed the kingdom for cooperating with Israel as well as Algeria-based rebels to cause forest fires in the country, wrote Middle East Monitor.

Morocco is also seeking to repair ties with Spain, its largest trading partner, after a diplomatic rift related to the complex dynamics in the region. The two countries had a falling out after Spanish officials allowed a Polisario Front leader to enter their country for medical treatment. The leader used Algerian travel documents.

As Reuters reported, Moroccan officials in response lifted restrictions on allowing 8,000 migrants from entering the Spanish enclave of Ceuta in northern Morocco.

Mohammed VI has near-supreme power in his country. He’ll need all of it to weather the storm that is hitting the country.

South Korean lawmakers passed a bill this week that will force tech giants Google and Apple to allow app developers to use alternative payment systems, a move that sets a precedent for similar action in other countries, CNN Business reported Wednesday.

Under the amended Telecommunications Business Act, developers can choose which payment systems to use to process in-app purchases, which will allow them to bypass pricey charges imposed by the two companies. It will also impose fines of up to three percent of the companies’ annual sales, in addition to $257,000 in penalties for violating the law.

Dubbed the “Anti-Google Law,” the legislation aims to curb the longstanding dominance of Apple and Google, which politicians say have undercut developers.

The bill now needs to be signed by President Moon Jae-in and is expected to take effect in September, according to Agence France-Presse.

Some developers and artists welcomed the draft law while the Silicon Valley giants criticized it.

Both companies argued that the legislation could hurt app developers and consumers in the long run. Apple had previously said the alternative payments could put purchasers at risk of fraud and undermine privacy protections.

Recent government reports show that Google and Apple made about $5.2 billion and almost $2 billion, respectively, in each of their app stores in South Korea in 2019.

While South Korea became the first country to impose such a law, other jurisdictions are considering similar moves.

In Australia, Treasurer Josh Frydenberg called for new regulations on digital payments, saying that without reform “it will be Silicon Valley that determines the future of a critical piece of our economic infrastructure.”

Meanwhile, US senators introduced a bill this month to loosen the firms’ grip on their app stores.

British officials euthanized Geronimo the alpaca this week after branding the animal a health risk, a culling that has set off an enormous public uproar against the government, the Washington Post reported.

The Department for Environment, Food and Rural Affairs confirmed that Geronimo’s death Tuesday. Authorities had originally ordered his killing back in 2018 after the animal tested positive the prior year for bovine tuberculosis – an infectious respiratory disease among cattle that can be passed to humans via nasal contact and bodily fluids.

However, the culling had sparked intense debate about the animal’s future and received a lot of attention from pro-alpaca activists, including Stanley Johnson, the father of Prime Minister Boris Johnson.

Social media erupted with pictures of the animal being dragged by authorities to his death, while conservationists and zoologists called the government’s actions “disgraceful.”

Geronimo’s owner, Helen Macdonald, admonished the government’s move, arguing that the mammal posed no risk and should have been retested. In a failed attempt in court, she insisted that the test results had shown a false positive because the animal had been given a tuberculin vaccine before testing.

Before arriving in England from New Zealand in 2017, Geronimo underwent multiple skin tests that all came back negative.

Last month, Geronimo’s supporters gathered in front of the prime minister’s office, asking Johnson to intervene and cancel the cull.

Meanwhile, the late alpaca will receive another test to determine if he was infected. The review could take up to three months.

The Price of a Bride

A proposed bill that would amend Congo’s 1987 family law regarding the payment of dowry and the issue of polygamy has stirred controversy with many saying the government has no right to interfere in matrimonial affairs, Africa News reported.

Congolese lawmaker Daniel Mbau, who proposed the legislation, has demanded a change in the family code to set a limit on the amount a would-be groom pays as dowry.

Under the bill, the proposed dowry for rural areas should be no more than $200, $500 for those in urban areas. Mbau said that many Congolese parents have turned the payment of dowry “into a business,” creating problems in society.

Currently, some families in the capital, Kinshasa, demand $3,000 to $5,000 as dowry for their daughters. The amount could rise depending on the daughter’s education level.

“Today, some parents are asking for so much. I attended a ceremony where a parent asked for an air ticket,” said one Congolese woman.

Although the bill has yet to be scheduled for national debate, it has whipped up a storm among the Congolese, many of whom believe there is no reason to change tradition.

Meanwhile, Mbau has also proposed the criminalization of polygamy in Congo, which is still practiced by some Congolese tribes.

In a new study, astronomers discovered that the gas giant has a very “fuzzy” core after studying data gathered by NASA’s Cassini probe, which had orbited Saturn and its moons between 2004 and 2017.

The space probe’s trove of information allowed researchers to use Saturn’s famous rings as a seismograph to determine the processes and the makeup of the planet’s interior.

They wrote that the core consists of a “soup” of rocks, ice and metallic fluids that slosh around and influence the planet’s gravity, according to Space.com

“We used Saturn’s rings like a giant seismograph to measure oscillations inside the planet,” co-author Jim Fuller said in a statement. “This is the first time we’ve been able to seismically probe the structure of a gas giant planet, and the results were pretty surprising.”

Fuller’s team also found that the core extends across 60 percent of the planet’s diameter – making its size larger than previous estimates. They added that the motions in the core constantly cause Saturn’s surface to ripple, which can change the planet’s gravity and subsequently affect the rings.

The findings can help scientists learn more about the composition and formation of other gas giants, including Jupiter.