For some, the coronavirus pandemic feels like it’s ending. For Tunisians, it’s as if it has just begun.

Hospital beds, oxygen and other medical supplies are running low in the North African country that managed to avoid the worst of the first wave of Covid-19 but now is seeing the most deaths per day since the pandemic started. The hospital system is on the verge of collapse. Only seven percent of the country is vaccinated.

“My mother is in a critical condition,” a woman identified only as Laila told Reuters as she stood at a hospital in Tunis, the capital. “Oxygen is not available… people die every day for this reason.”

Tunisians were banding together to combat the virus. Tunisian tennis star Ons Jabeur, the first Arab woman to reach Wimbledon’s quarter-finals, sold her racket to raise cash for the cause, France24 reported.

The international community has been sending urgently needed supplies to Tunisia, too.

Saudi Arabia and France each promised to send one million vaccine doses. The US pledged 500,000 doses. Morocco sent 100 intensive care beds. Qatar sent a field hospital. Egypt and other Arab countries are sending other supplies.

The humanitarian aid has arguably sparked a kind of competition for influence in Tunisia, wrote the Washington Post.

Saudi Arabia, for example, is traditionally a donor country that helps its allies in the region. Aid to Tunisia helps polish its image, which has been tarnished by Saudi agents killing journalist Jamal Khashoggi in Istanbul and the Saudi military’s outsized role in the humanitarian crisis plaguing war-torn Yemen.

The aid also plays out through foreign influence in Tunisian politics. President Kais Saied has been at loggerheads with Prime Minister Hichem Mechichi, who enjoys the support of the Islamist political party, Ennahda, which has the largest bloc in parliament. Ennahda has sought support from Turkey and Qatar, two Saudi rivals in the region. Saudi leaders could be seeking to improve their standing to counterbalance Qatari influence.

Still, all the geopolitics got shoved to the side this week after Saied fired the prime minister and suspended parliament, plunging the country into the most serious crisis in the decade since its transition to democracy. The president also instituted a curfew and ordered troops to surround parliament and the government seat. Already, fighting has broken out in the streets between Saied supporters and critics who call his move a coup.

Now, some worry that the birthplace of the Arab Spring and the only country to successfully transition to democracy might be headed the way of the other countries in the region who pushed out their leaders, namely Egypt, Libya, Syria and Yemen.

A failing economy, a healthcare crisis, a political crisis and the prize of a region geopolitical competition: It’s a lot for a young democracy to handle.

But as some Tunisians tell it, the struggles are worth it if it means holding on to the liberty they gained 10 years ago.

Ali Garci, a retired teacher, told the Washington Post that life hasn’t been perfect over the past decade but that he has enjoyed the freedom the revolution ushered in: “I spent 54 years under the (heels) of politicians like Ben Ali and [Habib] Bourguiba,” he said, referring to two former presidents, both deposed. “I prefer to die rather than continue the rest of my life under the (heels) of new brutal politicians.”

An Ecuadorian court stripped Julian Assange of his Ecuadorian citizenship this week, a ruling that comes as the WikiLeaks founder faces possible extradition to the United States, the Hill reported.

Officials formally notified the activist that his citizenship had been nullified, citing various issues, such as inconsistencies, unpaid fees and possibly forged documents in his naturalization letter.

Assange’s lawyer said the decision was made without due process.

Between 2012 and 2019, Assange had taken asylum in the Ecuadorian embassy in Britain to avoid arrest, according to CNN. In 2018, he was granted citizenship as part of an effort by then-President Lenin Moreno to get him out of the United Kingdom.

But in 2019, Ecuador revoked his asylum status over his antics inside the diplomatic mission. The move resulted in his arrest by British authorities in connection with bail-skipping charges and a separate extradition warrant from the US.

Meanwhile, Washington is currently attempting to extradite Assange to the US, where he has been indicted on 18 charges that include working with former Army intelligence analyst Chelsea Manning to disclose sensitive “national defense information.”

Earlier this month, a British court allowed the US to appeal a lower court’s decision against Assange’s extradition. 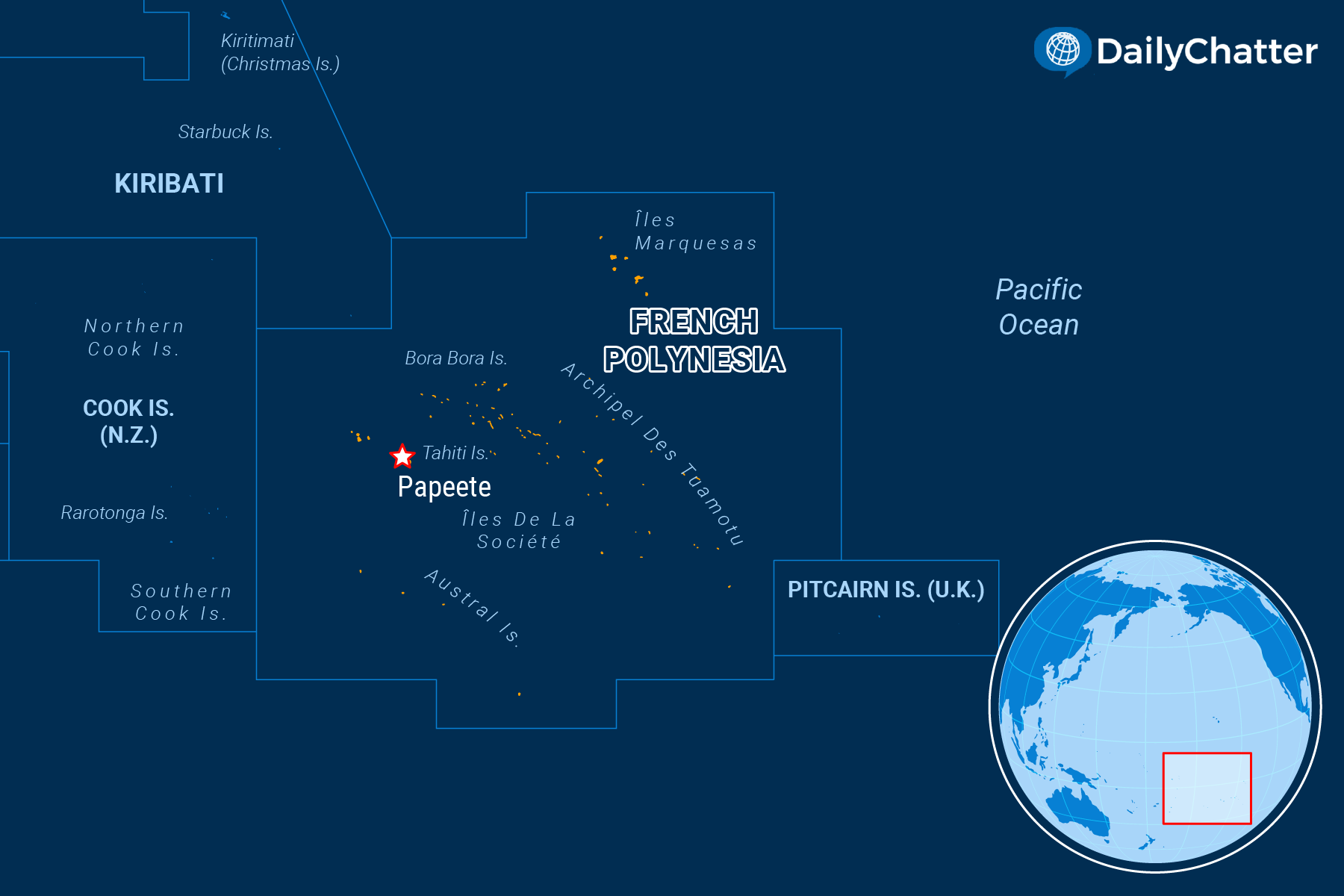 French President Emmanuel Macron admitted this week that France owed “a debt” to French Polynesia over nuclear tests conducted in the overseas territory during the 20th century but stopped short of a full apology, Agence France-Presse reported.

During a four-day visit to the South Pacific territory, Macron said he wanted “truth and transparency” and assured citizens that there was no government cover-up.

Between 1966 and 1996, France conducted multiple nuclear tests in the country. The issue remains a topic of resentment in French Polynesia, where France’s tests are seen as evidence of racist colonial attitudes that didn’t consider the welfare of locals.

In March, the French investigative website Disclose reported that the impact of the fallout was far more extensive than authorities had acknowledged: They estimated that more than 100,000 people may have been exposed to radiation, suffering from leukemia, lymphoma and other cancers.

Military officials, however, have denied a cover-up.

Since the tests ended in 1996, only 63 Polynesians have been compensated for radiation exposure but Macron said he was “committed to changing things” regarding compensation.

Even so, representatives of victims of nuclear tests demand that the president apologize and recognize France’s actions as “criminal” and “a form of colonization.”

Tong Ying-kit faces a maximum sentence of life imprisonment over his actions on July 1, 2020 – hours after the law came into effect: The defendant drove into a line of police with his bike while carrying a flag reading, “Liberate Hong Kong, Revolution of Our Times.”

Government-appointed judges ruled that Tong’s act and use of slogan represented a secessionist desire to separate Hong Kong from China. They added that the slogan would incite others to commit sedition.

The ruling could have large implications for other such cases, where defendants have allegedly used the same slogan – originally coined by now-jailed activist Edward Leung in 2016.

Benedict Rogers of the British-based Hong Kong Watch called the verdict “another blow to free expression.” He said the court’s opinion on the slogan “sets a grim precedent that will open the path to further arrests, prosecutions, and political trials.”

Hong Kong’s national security law imposes criminal penalties on anyone committing acts of subversion, secession, terrorism and collusion with foreign forces. Critics have denounced it as a move to undermine the territory’s “one country, two systems” framework.

Currently, more than 130 people have been arrested under the security law, of which 76 have been charged, including activists, protesters and pro-democracy lawmakers.

Pulse of the Planet

The Earth has a “pulse” and it beats nearly every 30 million years, according to a new study.

Lead author Michael Rampino and his colleagues discovered that major geological events that have occurred on Earth over the past 260 million years have followed a rhythmic pattern, Live Science reported.

Rampino explained that geologists had suspected such a pattern but poor dating of geological events has made it difficult to study the phenomenon quantitatively, until now.

The research team analyzed the literature and data of 89 major geological events in the past 260 million years, including extinctions, changing sea levels and changes in the organization of Earth’s tectonic plates.

Using a mathematical tool known as Fourier analysis, the team found that the majority of these events clustered into 10 separate “times” that were approximately 27.5 million years apart.

Researchers noted that the results possibly extended further back than 260 million years: They suggested data from sea-level changes from about 600 million years ago also follow this pulse.

Yet, they still can’t determine what causes the pulse in geological activity.

Among various theories, the authors hinted that plate tectonics and movement inside the mantle. But the pulse could also be connected to the planet’s movement in the solar system and the galaxy.

Regardless, Rampino said that the next pattern would likely come in 10 to 15 million years.