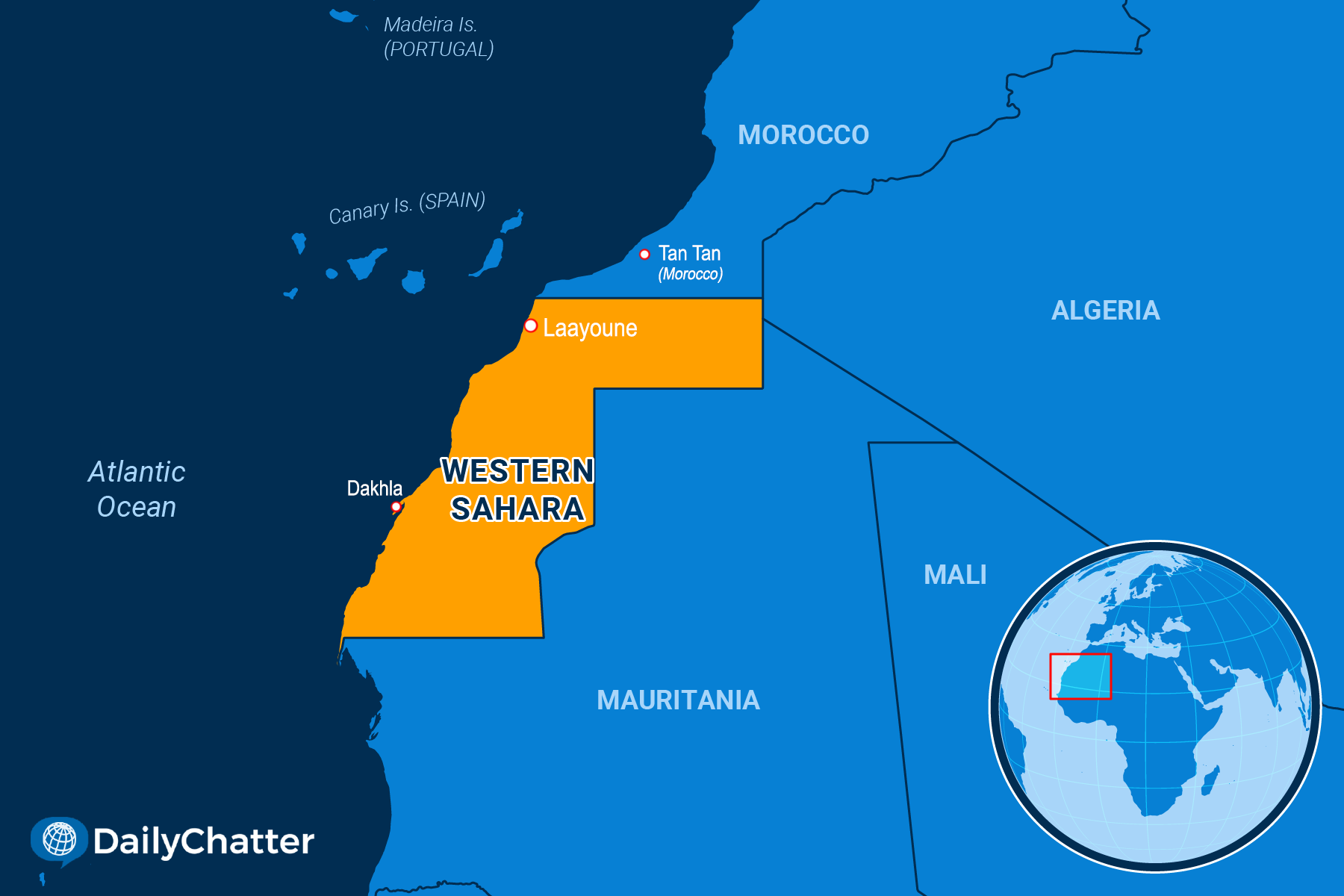 Driving from Tan Tan, deep in southern Morocco, it’s a long, lonely road along the Atlantic and the vast desert through the Western Sahara.

Few cars drive here, mostly trucks carrying supplies to the frontier cities of Laayoune and Dakhla. Outside of those two cities, the few towns are almost deserted during the day, except for the occasional outdoor market and the smoking grills of fish that get busy after Noon prayer.

One thing is ubiquitous, though – the Moroccan military. Every so often on the 16-hour drive to Dakhla – there is a military checkpoint, with a bored soldier eager for a chat. In Laayoune itself, one could be forgiven for mistaking the city for a quasi-military base, so common are soldiers and their vehicles.

And going off of the few roads in this region is risky – there are mines buried beneath the sand.

Morocco has claimed this territory since the 1950s and has administered it for decades. And in doing so, it has increased its military presence to ensure its claim and fight the Polisario Front, an independence movement backed by neighboring Algeria. It says that the soldiers are necessary to keep the peace because of the Sahrawi who live here, and who want to be free.

This month, Morocco’s claim got a boost: The US recognized it for the first time, in exchange for Moroccan recognition of the state of Israel. Critics believe the move could upend the region, and lead to further instability and violence.

The US decision certainly gave more weight to Morocco’s claim over the former Spanish colony the United Nations classifies as a “non-self-governing territory,” as the BBC explained. The US is the only major world power to recognize Morocco’s claim, a move that runs counter to UN resolutions on the region. The tit-for-tat deal was outgoing President Donald Trump’s “parting gift” to the Mediterranean country, reported the Washington Post. Now, Trump is reportedly pushing a weapons deal with Morocco that could further complicate the situation, the Hill wrote.

Understandably, the Polisario Front condemned the American move, France 24 wrote. It was the latest development in a tense period.

“There is just no feasible way to prevent a full return to war,” the Polisario Front’s envoy to Europe, Oubi Bouchraya Bachir, told Bloomberg. “The cease-fire is over once and for all.”

In November, Front leaders announced they would put aside a 1991 ceasefire after Moroccan troops crossed a UN buffer zone to reopen a road to neighboring Mauritania that is Morocco’s only route to and from sub-Saharan Africa, Al Jazeera reported.

Morocco, meanwhile, has opposed a long-promised referendum for the 500,000 residents of the Western Sahara to determine whether they want to become subjects of Moroccan King Mohammed VI.

Algeria, incidentally, rejected the American recognition of the Western Sahara. The Financial Times warned that disagreements over the region could spark an unwelcome war between Morocco and Algeria.

Writing in Foreign Policy magazine, University of San Francisco politics Professor Stephen Zunes said Morocco has an iron grip on the country and limits civil rights. He noted how even peaceful protests by residents have long been met with hard crackdowns. He added that the only way forward is sticking to international law.

“Nov. 14 marked the tragic – if unsurprising – breakup of a tenuous, 29-year cease-fire in Western Sahara between the occupying Moroccan government and pro-independence fighters,” he said. “The outbreak of violence is concerning not only because it flew in the face of nearly three decades of relative stasis, but also because Western governments’ reflexive response to the resurgent conflict may be to upend – and thereby hamper and delegitimize for perpetuity – more than 75 years of established international legal principles.”

So, for the moment, the Sahrawi will continue to sing mournful songs of liberation and Moroccans, who are offered government support to relocate, will continue to move to the region. These days, they outnumber the Sahrawi, a fact evident in the restaurants, shops and tourist industry developing quickly in the territory’s cities.

It was also evident in the celebrations that broke out in Laayoune after the US officially changed Morocco’s map to include the Western Sahara.

Nepalese Prime Minister K.P. Sharma Oli dissolved parliament Sunday, a move that could alter the political future of Nepal, where China and India have been vying for influence, the New York Times reported.

Oli has been increasingly criticized – including by members of his Communist Party – for his handling of the coronavirus pandemic, while his administration has been plagued by allegations of corruption.

He was elected prime minister in 2017 on the promise of rooting out corruption and fostering closer ties with China.

The dissolution of parliament might help Oli avoid a potential no-confidence vote but analysts said the move could be challenged in Nepal’s highest court.

Nepal has long swung between favoring China or India even as the country has fostered closer ties with Beijing in recent years: China has pumped money into Nepal and, earlier this month, both nations jointly announced a new height for Mount Everest, which had been a source of dispute for years.

Analysts added that if Oli falls, China might lose a friend – the next prime minister might be more India-friendly.

More than 300 Nigerian boys were reunited with their parents over the weekend, a week after armed groups stormed a school in northwestern Nigeria in one of the largest kidnappings of school children in the country’s history, the Wall Street Journal reported.

Nigerian officials, including President Muhammadu Buhari, said that the army had freed all 344 boys from their kidnappers after six days in captivity, but didn’t provide further details.

Last week, the Islamist militant group, Boko Haram, claimed responsibility for abducting the boys at the school in Katsina state. That claim could not be confirmed.

Analysts, meanwhile, remained skeptical of the government statements: They noted that if Boko Haram was indeed responsible, the attack marks a dangerous expansion of the group from its stronghold in the northeast.

In 2014, the militant group gained international notoriety when it kidnapped 274 schoolgirls from the northeastern town of Chibok.

More than 100 of the kidnapped girls remain missing.

At least 250,000 people held in state care in New Zealand suffered abuse during a period that spanned more than four decades, the Guardian reported.

An interim report by a royal commission released this month found that children, young adults and disabled individuals faced abuse in state-run institutions, as well as affiliated religious ones, such as church-run orphanages between the period of 1950 to 1999.

The commission also noted that 655,000 people passed through these institutions during that period: It believes that the true number of abuse victims might never be known. Even so, so far, 1,900 survivors of abuse have contacted the commission, and it expects thousands more to do so.

The report highlighted that physical and sexual abuse was the most common form of abuse, adding that the victims were the “most disadvantaged or marginalized segments of the community … particularly from Māori whanau [family], Pacific families, children from impoverished backgrounds, disabled people and women and girls.”

Despite only representing 16 percent of the country’s population, Maori make up 69 percent of children in state care and 81 percent of those abused in care.

The commission was announced in early 2018 by Prime Minister Jacinda Ardern, who called the abuse of children by government-run institutions “unconscionable.”

Prehistoric humans managed to travel from Taiwan to the Ryukyu islands in southwestern Japan using Stone Age-era bamboo rafts more than 30,000 years ago.

Scientists have proven that such a journey was possible but until now have wondered if the voyage was deliberate or just accidental, according to New Scientist.

Researchers noted that the Kuroshio current, which flows from Luzon in the Philippines past Taiwan and Japan, could have brought the ancient people to the islands: The current is one of the strongest in the world.

However, a new study showed that the powerful current had nothing to do with the destination of the travelers.

A science team looked at the existing data from 138 satellite-tracked buoys that drifted past Taiwan and Luzon between 1989 and 2017. Out of all the buoys, only four traveled within 12 miles of any of the Ryukyu islands and this was mainly due to unusual weather events such as typhoons.

The findings show that Stone Age sailors voluntarily traveled to the islands, instead of being directed by nature.