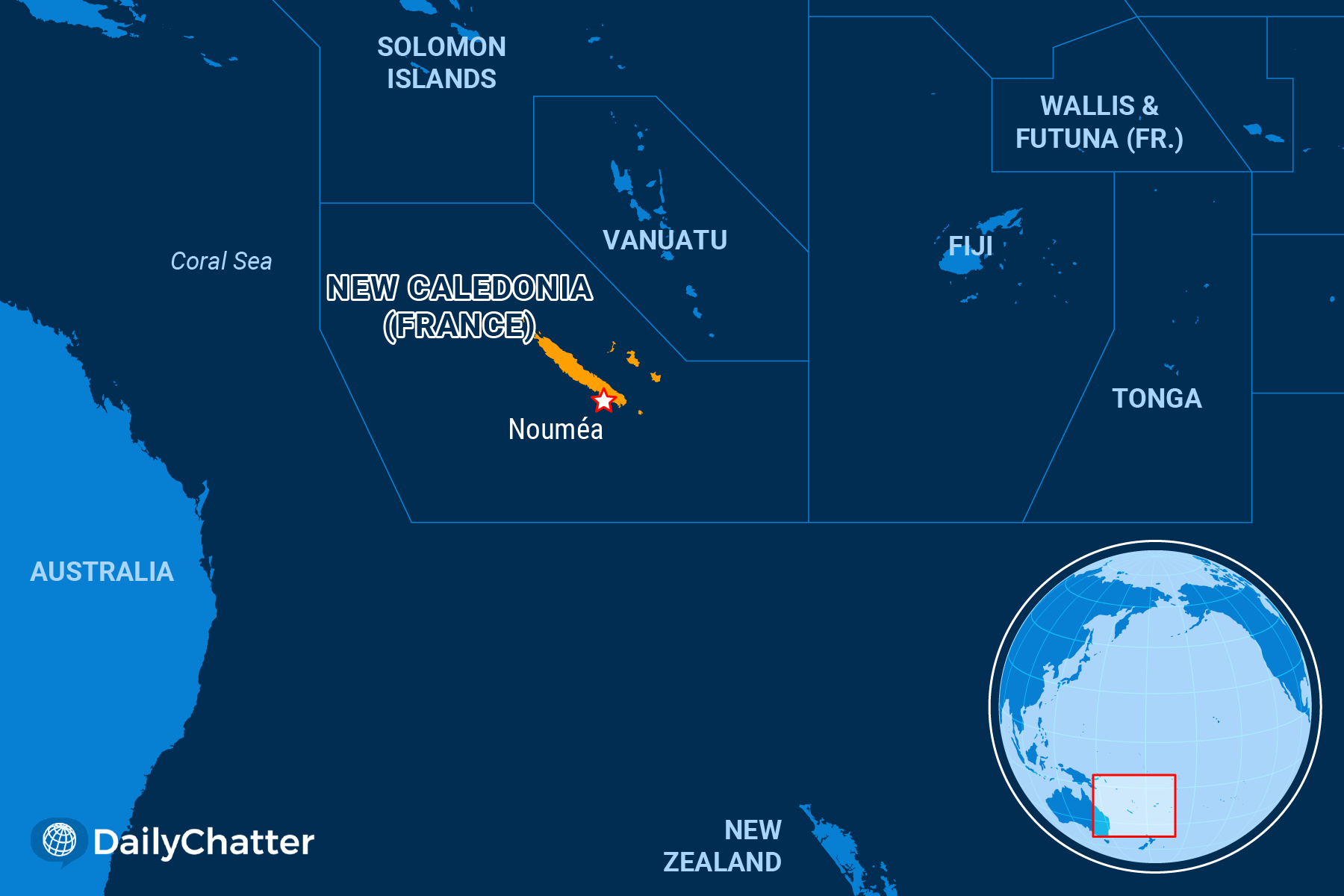 A Sort of Dignity

The French overseas territory of New Caledonia has been called the Paris of the Tropics. The online magazine Yachting World showcased the blue waters, vibrant sea life and French charm in the archipelago between the Coral Sea and the Pacific Ocean.

The head of state of the islands is the president of France, explained the BBC. Voters send two deputies and two senators to the French parliament. It’s a diverse country. Around 40 percent of the country are members of the indigenous ethnic Kanak community. Another 27 percent are Europeans referred to as “Caldoches.” The rest come from other islands and mostly refer to themselves as “Caledonians.”

But plenty of folks among New Caledonia’s 270,000 inhabitants want independence, not fealty to a former – and arguably current – European imperial power. On Oct. 4, voters in the territory go to the polls to consider separating from France.

It’s not the first time this issue has come up.

In the 1980s, violent clashes broke out between the Kanaks and Caldoches until France intervened with a plan to redistribute political power on the islands, reported Al Jazeera. In 1988, the French and locals reached the Noumea Accord, granting the territory more autonomy and stipulating how New Caledonia might achieve independence: Voters would have three chances to support the idea – in 2018, 2020 and 2022.

In 2018, citizens voted against independence by a ratio of 56 to 44 percent, with a turnout of more than 80 percent. At the time, supporters of independence told the Guardian the referendum was a matter of dignity.

This year, one of the biggest pro-independence political parties, the Kanak and Socialist National Liberation Front (FLNKS), has proposed a three-year transition to a new country called Kanaky-New Caledonia, wrote the Strategist, a publication of the Australian Strategic Policy Institute. That could work under French plans in case of a ‘yes’ vote, too.

Pro-independence supporters have a load of domestic issues they think they could manage better than local officials under French rule. For example, they want a newly sovereign New Caledonia to offer more services to the squatters living in ramshackle housing around the capital of Noumea, Radio New Zealand wrote.

Secessionists are working hard to avoid violence or controversies. “Everyone will have their place in the new state, even those who voted ‘no,'” Magalie Tingal, a FLNKS leader, said in an interview with the French newspaper Le Figaro. “No one will be expelled from the country but will be free to leave or stay.”

Tingal’s side probably will lose. But there is dignity in trying.

Allies and rivals of the United States expressed shock, uncertainty, worry and sadness in the wake of the first US presidential debate between Republican President Donald Trump and Democratic challenger Joe Biden, the Associated Press reported Wednesday.

The debate, the first before the presidential election on Nov. 3, was rife with insults, interruptions and yet had very little discussion of policy, prompting many world leaders and analysts to question the state of the US democracy.

In Europe, Finnish-Swiss professor Jussi Hanhimaki said that the debate was disturbing to many on the continent, who see their transatlantic ally as “a symbol of democracy.” In Australia, Paul Kell of the Australian newspaper said the debate was “swamped” by the “rancor engulfing America.” In Africa, Kenyan commentator Patrick Gathara noted, “This debate would be sheer comedy if it wasn’t such a pitiful and tragic advertisement for US dysfunction.”

And in the Middle East, the focus was on the Arabic expression used by Biden, “Inshallah” (God Willing) in response to Trump’s pledge to release his tax returns. Still, Emirati political scientist, Abdulkhaleq Abdulla, wondered, “How did America reach this level of political decline?”

Meanwhile, some commentators said the debate was going to make most Canadians feel grateful for living in Canada.

The enormous international interest in the debate shows the importance of the American presidential election to the world. But the debate itself has left allies and rivals alike questioning the country’s place on the global stage, the New York Times wrote.

John Sawers, a former British diplomat, told the Times: “…It makes me despondent about America. The country we have looked to for leadership has descended into an ugly brawl.”

Some allies worried Russia, China, Turkey and other authoritarian states would feel emboldened to act freely in the absence of US leadership. In China, meanwhile, the response to the debate was “glee,” the Times noted.

Still, some watching from afar just struggled to understand the “shout-athon” at all, according to the Washington Post.

In Japan, public broadcaster NHK employed three interpreters to make sense of the debate for the local audience: All three were heard by their Japanese audience repeatedly talking over one other as they tried to keep pace with the candidates and moderator, whom the audience could also hear.

Regardless, the interpreters were the heroes of the evening, praised by the Japanese public for their skill and endurance: “Those interpreters deserve MEDALS!” said one member of the audience.

A court in the city of Lucknow acquitted 32 people Wednesday accused of involvement in the demolition of a 16th-century mosque in 1992 by Hindu rioters, which led to 2,000 deaths, mainly Muslim, Al Jazeera reported.

The individuals – including senior leaders from the governing Bharatiya Janata Party (BJP) – were accused of criminal conspiracy: Inciting a mob to destroy the mosque in the northern town in Ayodhya. The incident sparked nationwide violence.

The court ruled that the demolition occurred due to “anti-social elements,” adding that the defendants were trying to stop the crowd. It said there was a lack of evidence to directly tie the accused to the violence.

The verdict was welcomed by the BJP, which said that the individuals were “vindicated.” Representatives of the Muslim community, however, plan to appeal the acquittals and criticized the court for ignoring evidence.

The acquittal marks another victory for the BJP, one year after India’s top court awarded the disputed mosque site to Hindus for the construction of a temple.

Israel passed a new law Wednesday that would limit protests around the country, citing fears over the rising number of coronavirus infections, Bloomberg reported.

The legislation requires that residents stay within 0.6 miles of their homes and allows the government to limit the number of participants in demonstrations. The measure comes as thousands of demonstrators have been protesting in Israeli cities for weeks against Prime Minister Benjamin Netanyahu.

Protesters denounced the move as an attempt to muzzle dissent. They want Netanyahu to resign over the economic fallout from the pandemic and his multiple corruption indictments.

The new law will also permit the government to extend the state of emergency to 21 days.

It remains to be seen, however, if the new law will also hinder communal worship and study in the ultra-Orthodox Jewish communities. One-third of all Covid-19 cases in Israel is attributed to the community. At the same time, Netanyahu’s party depends on ultra-Orthodox legislators for its parliamentary majority.

A massive genetic study recently shattered the belief that the ancient seafaring Vikings were homogenous.

Instead, scientists discovered that the fierce raiders and explorers that lived between 750 AD and 1,050 AD were very genetically diverse, National Geographic reported.

This was discovered after researchers studied the genetic data of more than 400 humans buried in sites where the Vikings are known to have roamed, including Southern Europe and Greenland. The remains date from 2,400 BC to 1,600 AD and reveal a very clear picture of Viking DNA: While they did set off from Scandinavia, the genetic analysis showed that they didn’t interact much with the region and mixed a lot with the various peoples they encountered in their far-flung travels.

The team found ancestral evidence from both Southern Europe and Scandinavia, including the Indigenous Scandinavians known as Sami.

The results also showed that modern Scandinavians are not strongly related to Vikings – only 15 to 30 percent of current Swedes are genetically tied to the individuals studied who lived in the same region some 1,300 years ago.

The authors say the data shows the Viking identity wasn’t purely Scandinavian while leaving some key questions: How did the Viking phenomenon happen and what bound these infamous people together if it wasn’t ethnicity?

“People can adopt and adapt to dominant cultural modes of survival,” said researcher Davide Zori, who was not involved in the study. “For whatever reason, being a Viking was one of the primary modes of surviving and being successful economically and politically.”