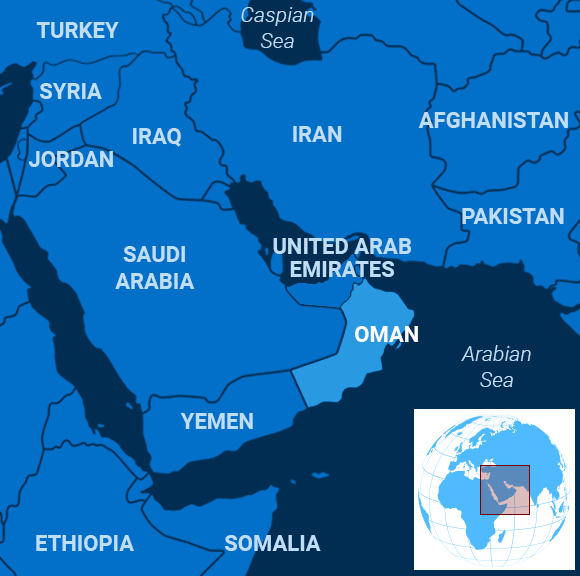 In early 2017, the late Sultan Qaboos bin Said of Oman invited Hassan Rouhani, the president of Iran, to his palace in Muscat. A year later, he held an audience with Israeli Prime Minister Benjamin Netanyahu.

Arab rulers usually don’t have both of those leaders on their agendas. For Qaboos, however, “this was simply a way of reinforcing Oman’s status as the region’s most ambidextrous conciliator,” explained writer Hugh Eakin in a New York Times opinion piece.

Qaboos passed away at the age of 79 on January 10 after ruling as an absolute monarch for nearly 50 years. His death heralds a loss for diplomacy in the region.

When Qaboos assumed the throne, Oman, a deeply conservative Islamic country, was impoverished, reported the Guardian. Illiteracy was rife. Disease was widespread. Slavery was legal. He outlawed slavery and used oil revenues to boost life expectancy to around 75 and the literacy rate to nearly 90 percent.

Internationally, Qaboos was close to Iran because Iranian forces helped him secure power in the 1970s, Foreign Policy magazine wrote. But he was also an important mediating influence between Iran and the US. In the 1980s, he sponsored cease-fire talks between Iran and Iraq, which were at war. He helped former US President Barack Obama negotiate the Iranian nuclear agreement. In 2016, he helped secure the freedom of Iranian-Canadian professor Homa Hoodfar from detention in Tehran. In 2009, he facilitated the release of three American hikers from Iran.

“Oman survived the first test, pulling off a well-choreographed transition that transfers the authority and legacy of Sultan Qaboos to his successor,” scholar Kristin Smith Diwan of the Arab Gulf States Institute in Washington told Bloomberg. “But the challenges for the new sultan are clear: navigating the regional contest for power and addressing the pressing demands for economic reform.”

As the price of oil has dropped in recent years, Oman has been borrowing and running up debt, wrote John Sfakianakis of Chatham House, a British think tank. Reuters reported that the country faces a potential credit crunch if lenders balk at giving more. But much of that debt has helped improve the country’s infrastructure, education and budding tourism industry, added Yasmina Abouzzohour, a visiting fellow at the Brookings Doha Center.

Most analysts expect that for Oman to pivot to industries and types of technology that create jobs in the future, Haitham will need to pursue regulatory reforms and other changes, including growing the private business sector and reducing the role of the state in the economy.

That will require Haitham to cede some power to other actors. Luckily, Qaboos put him in a good position to be big.

The candidate backed by Italy’s far-right League party on Sunday failed to unseat the center-left incumbent in a regional election that was seen as a test for Italy’s national coalition government, the BBC reported.

League party leader Matteo Salvini campaigned extensively in the northern region of Emilia-Romagna, a center-left stronghold since the Second World War, in the hopes of bringing down the national government composed of former rivals Democratic Party (PD) and the populist Five-Star Movement. However, Stefano Bonaccini of PD took 51.4 percent of the vote, compared with 43.6 percent for the League’s Lucia Borgonzoni.

Previously, Salvini was part of a coalition government with the Five-Star party, but he pulled out of the union in August in an attempt to win outright power. His bid to force snap elections failed, but the League is leading in national polls and has performed well in other key regional polls, including another regional election held Sunday in the southern region of Calabria, CNBC reported.

Palestinian Prime Minister Mohammad Shtayyeh on Monday condemned US President Donald Trump’s proposed peace plan for the Middle East as an effort “to finish off the Palestinian cause,” Al Jazeera reported.

Palestinian leaders said that they were not invited to discuss the proposed plan and fear that it will dash their hopes for an independent state comprising the occupied West Bank, occupied East Jerusalem, and the Gaza Strip.

According to Palestinian and Arab sources, the proposal will benefit Israel, and may include the possible annexation of about half of the West Bank.

In recent years, the Trump administration has angered Palestinians by recognizing the contested city of Jerusalem as Israel’s capital and cutting funding to Palestinian aid programs, the Associated Press reported.

The White House will release details of the plan at noon on Tuesday.

Bolivia’s interim president Jeanine Anez has received criticism from allies and opponents over her decision to run in the upcoming presidential elections, Reuters reported.

Anez announced her candidacy in the May presidential elections last week and asked her ministers to resign on Sunday for a “new stage of democratic transition.”

She became interim president last year following the ouster of longtime leftist President Evo Morales over disputed elections, which forced him to leave the country in November.

She previously said that her goal was to ensure that the country holds transparent elections and that it would be inappropriate for her to run.

Her allies have decried her flip-flop. Communications Minister Roxana Lizárraga resigned in protest, calling Anez’s candidacy a “betrayal of democracy.”

Morales said the decision is proof that his ouster amounted to a “coup,” a stance that he has held since his removal.

Morales has been barred from running in the upcoming elections. However, he has appointed former economy minister Luis Arce as the candidate for his Movement for Socialism party.

The Wollemi pines in Australia are considered “living fossils” whose species has existed for up to 200 million years.

The trees survived the extinction of the dinosaurs and recently were able to survive the massive bushfires that have gripped the continent, Sky News reported.

Since September, bushfires have burned up more than 24 million acres, killing about 30 people and more than a billion animals.

Recently, Australian officials and firefighters completed a “brave and secret mission” to save the world’s last-known natural grove of the trees from becoming ash.

Firefighters used large air tankers to drop fire retardants and set up an irrigation system at the isolated site.

“Wollemi National Park is the only place in the world where these trees are found in the wild and, with less than 200 left, we knew we needed to do everything we could to save them,” said New South Wales Environment Minister Matt Kean.

Kean said the species is expected to survive the fires, but cautioned that the full impact won’t be known for some time.

Being the oldest doesn’t always mean being the most resilient, however.

The pines are heavily monitored by the government and their exact location is kept secret to prevent the introduction of pathogens and illegal visitors.