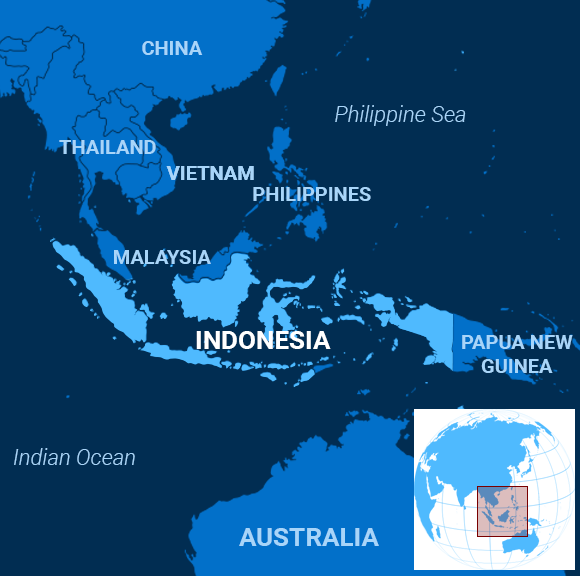 The leader of the fourth-most-populous country in the world, Indonesia, has big plans.

The announcement came after the president – widely known as Jokowi – also secured $23 billion in investment for infrastructure projects during a visit to the United Arab Emirates, Reuters reported.

In those meetings, Sheikh Mohammed expressed interest in property that he might develop. “The crown prince asked for an island with cool air and nice beaches,” said Indonesian Maritime and Investment Affairs Minister Luhut Binsar Pandjaitan, according to the Jakarta Post. “He really wants to invest there.”

Indonesia’s current capital, Jakarta, is sinking. Its buildings are slowly settling into soft, swampy land while the waters of the Java Sea and 13 rivers crisscrossing the city rise due to climate change. By 2050, around 95 percent of the city will be underwater, the BBC explained.

Jokowi also expects to raise $20 billion through a sovereign wealth fund, Reuters wrote. The largest Muslim-majority country in the world, Indonesia is banking on Gulf foreign investment to boost the nation’s growth of 5 percent in recent years. That number would be impressive for most developed countries but has lagged behind Asia’s two other giants, China and India.

He also expects to spend money on defense, including potential submarine purchases to address “geopolitical and geo-strategic” issues, according to Turkey’s Anadolu Agency.

Indonesia and China have been at odds over their claims to islands in the South China Sea. As Asia Times wrote, a combination of resolute naval displays and savvy diplomacy led to Indonesia fending off an incursion of Chinese Coast Guard and fishing vessels into its economic territory. That story also detailed a host of new Indonesian military purchases.

In World Politics Review, Joshua Kurlantzick issued some words of caution. Jokowi is doubling down on building the economy but has not tasked himself with political reforms that will help keep that economy strong in the long run. His government is a mix of veteran, sometimes corrupt politicians and younger reformers and technocrats. Some cabinet members have close ties to powerful business leaders. It’s not clear if everyone will put his agenda above their own.

Indonesia is fractious, but it’s a country of the future.

Its main provider, Russia, suspended supplies earlier this month after the failure of negotiations to foster deeper economic integration between the two nations.

Belarus’ President Alexander Lukashenko said that his country aims to import less than 40 percent of the oil it needs from Russia, compared with historical levels of more than 80 percent.

Russia stopped supplying its neighbor with oil after Dec. 31, arguing that Belarus needed to accept deeper economic integration with Russia to benefit from the cheap prices.

Earlier this month, Lukashenko and his Russian counterpart Vladimir Putin failed to reach an agreement on closer ties after two rounds of talks.

The talks sparked protests last month over fears they could lead to Belarus becoming a part of Russia, an idea that Lukashenko rejected.

Importing oil from alternative sources is more expensive for Belarus, but analysts argue that the move is meant to tell Putin that Lukashenko “isn’t ready to become a Russian governor.”

Police in Lesotho have summoned the country’s prime minister for questioning over alleged links to the murder of his estranged wife in a case that has intensified the country’s months-long political crisis, the Guardian reported.

Prime Minister Thomas Thabane said that he will cooperate with the investigation into the 2017 murder of his wife, Lipolelo Thabane, who was shot dead two days before his inauguration by unknown assailants.

The case was reopened this month after the country’s police chief said in a letter that communications records showed that someone at the murder scene called Thabane’s cellphone on the day of the crime.

Thabane said last week that he planned to resign after senior members of his party accused him of hampering the investigation.

High profile people have also been summoned to shed light on the case. Among them is Thabane’s second wife, who has mysteriously disappeared since she failed to turn up for questioning on Jan. 10.

Lesotho has been in a political crisis for several months, with Thabane indefinitely suspending parliament and clashing with his party.

Bangladesh’s high court ordered the shutdown of hundreds of factories that have contributed to the pollution of the capital’s main river, which has become one of the world’s most polluted, Agence France-Presse reported on Tuesday.

The landmark verdict would shutter 231 factories that have been dumping waste into the Buriganga river and give the authorities a stronger hand against influential factory owners.

Bangladesh’s geography includes hundreds of rivers, but the country is also one of the world’s largest textile exporters, prompting officials to turn a blind eye to the industrial waste dumped in its waters.

Human Rights Watch previously reported that more than 5.5 million gallons of toxic waste per day were dumped into the Buriganga by more than 100 tanneries located on its banks. Though they were officially forced to relocate in 2017, hundreds of illegal factories continued to pollute the river.

The 2011 Fukushima nuclear disaster in Japan is considered one of the world’s worst nuclear accidents since the crisis at Chernobyl, Ukraine, in 1986.

After a tsunami triggered the accident at the Fukushima nuclear power plant, Japanese authorities created an evacuation zone to keep civilians safe from radioactive contamination.

While only a few people dared to move back into parts of the evacuation zone, the local fauna have been thriving, thanks to the absence of humanity, Newsweek reported.

In a recent study, researcher James Beasley and his team documented more than 20 species that recolonized the area around the plant, including macaques, raccoons and wild boars.

The authors collected more than 267,000 wildlife photos over 120 days, which revealed that most animals thrived in areas where there was zero human presence.

Beasley added that what is happening in Fukushima is similar to wildlife thriving in Chernobyl, where wolf and other mammal populations have flourished in the deserted area.

He cautioned that a flourishing of wildlife in a contaminated area doesn’t mean that the animals are healthy, as the full effects of long-term exposure to radiation on wildlife remain unknown.

“Based on these studies it is clear that if there are any health-related impacts from exposure, they are not manifesting in widespread impacts to populations of these species,” Beasley said.