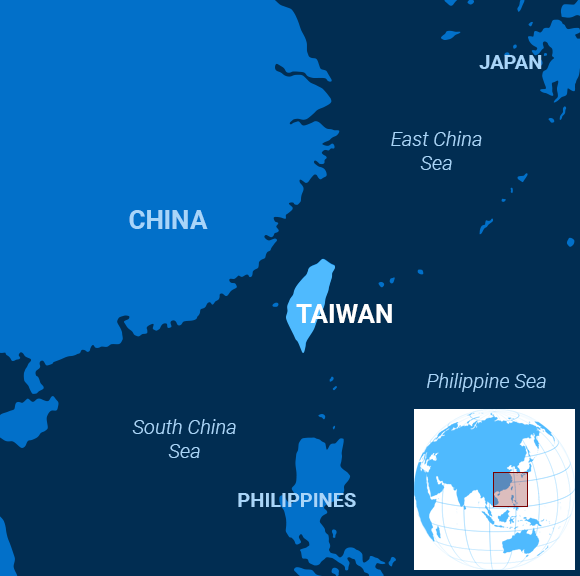 Amid Chaos, a Shoo-in

Taiwanese President Tsai Ing-wen is almost sure to win re-election on January 11.

That’s one of the few certainties she can depend on.

The political stars aligned for Tsai. At the same time she and her Democratic Progressive Party, or DPP, have been stalwartly resisting China’s efforts to undermine Taiwan’s independence, China’s crackdown on Hong Kong has given her constituents an example of why they might not want the central government in Beijing to rule their island, the Financial Times explained.

While China claims that Taiwan is a breakaway province, the country has never been under Communist control.

“Democracy and authoritarianism cannot coexist within the same country,” Tsai said in her New Year’s Day speech, according to CNBC. “Hong Kong’s people have shown us that ‘one country, two systems’ is absolutely not viable.”

The island’s economy is doing OK, too, added GlobalVoices. Taiwanese companies are even taking advantage of the trade war between the US and China. But rising costs in the country’s cities are outstripping wages, squeezing younger people especially.

While the incumbent’s popularity has surged, her China-friendly opponent, Han Kuo-yu, has cratered in the polls. Voters in the city of Kaohsiung, where Han is mayor, have amassed 300,000 signatures to recall him from that position, reported the South China Morning Post.

Han failed to identify China as Taiwan’s main military rival during an interview on a late-night talk show, for example, Bloomberg reported. His response was a flop in a country that purchases American fighter jets to stop potential Chinese invasions.

The imbalance ironically comes after China has spent significant treasure and political capital to influence Taiwanese politics, noted Kharis Templeman in a Brookings Institution report. “If Tsai and the DPP remain in power after the 2020 elections, as now appears increasingly likely, this strategy will not have delivered on its objectives, and it will present Beijing with a hard choice: double down, recalibrate, or fundamentally reassess its Taiwan policy,” wrote Templeman.

Tsai appears to expect a doubling down.

Taiwanese lawmakers recently enacted an “anti-infiltration act” designed to limit China’s political influence, wrote the Diplomat in a story that included examples of how Chinese officials shaped local news coverage. “We passed the bill to prevent China, which is Taiwan’s only threat, from using its sharp power and its capital to pollute, manipulate or sabotage Taiwan’s democratic activities,” DPP lawmaker Wang Ting-yu told France 24.

Tsai might win her election fight, but it’s not the only battle before her.

Several foreign diplomats visited India-administered Kashmir on Thursday for the first time since the Indian government stripped the Muslim-majority region of its special status in August, Al Jazeera reported.

The visit is part of Prime Minister Narendra Modi’s diplomatic outreach program in response to criticism of his government for not allowing foreign envoys to assess the situation in the region.

India invited more than a dozen diplomats, including those from the United States. However, several envoys from the European Union declined the invitation after they were refused permission to travel independently.

Opposition parties and Kashmiris called the visit a “guided tour” and criticized Modi’s government for trying to portray normalcy in Kashmir.

Analyst Sushobha Barve told Al Jazeera that the visit was meant to assure US officials that there are no human rights violations in Kashmir.

“A US Congress resolution on Kashmir is expected anytime soon, so the Indian government is trying to reach out to them and maintain how the abrogation of special status has restored normalcy in Kashmir,” he said.

Since its autonomy was stripped, internet services in Kashmir have been shut down for more than five months. The region’s top political leaders still remain in detention.

Libya’s United Nations-supported government welcomed Russian and Turkish calls for a ceasefire in the ongoing civil war that has plagued the country since April, the Associated Press reported on Thursday.

The Tripoli-based government in the west expressed support for ending the conflict, but their rivals in the east have yet to follow suit.

Libya is currently governed by dueling authorities in the east and the west. The east-based government is led by the forces of former general Khalifa Hifter, and supported by the United Arab Emirates and Egypt, as well as France and Russia.

Earlier this week, Turkish President Recep Tayyip Erdogan and his Russian counterpart Vladimir Putin called for a Jan. 12 ceasefire between Libya’s warring factions. They did not specify the conditions of the truce.

Their joint statement comes a week after Turkey’s parliament voted to send forces into Libya to counter Russia’s support for Hifter.

Analysts believe that the proposed ceasefire could mean that Turkey and Russia will scale down their involvement in the conflict to avoid further escalation.

Ukrainian investigators arrived Thursday in Iran to investigate whether the deadly crash of a Ukraine-bound passenger plane in Iran was caused by a missile or terrorist attack, the Financial Times reported.

On Wednesday, a Ukraine International Airlines Boeing 737-800 crashed near Tehran minutes after take-off, killing all 176 people on board.

The incident occurred hours after Iran launched missile strikes against US forces in Iraq in retaliation for the killing of top military general Qassim Soleimani by a US drone strike last week.

Iranian officials initially claimed that the plane crashed because of a “technical failure following a fire” on the flight, and strongly rejected speculation that its forces attacked the plane by accident.

Ukraine investigators, meanwhile, are searching for any missile debris, possibly from a Russian-made Tor anti-aircraft missile, after seeing pictures of alleged fragments online.

The team also includes members of the Dutch-led investigation team that looked into the shooting down of Malaysia Airlines Flight 17 by a Russian-made missile over eastern Ukraine in 2014.

Planet Earth is composed of dozens of tectonic plates that constantly move around to position themselves – and end up causing earthquakes in the process.

The quakes were pretty small by Earth’s standards, but they are the largest seismic activities recorded on Mars.

Scientists remain unclear as to what exactly is causing the planetary rumble.

After Mars was formed, the molten rock surface of the planet cooled down to form a static crust round a rocky inner mantle, yet scientists aren’t sure about the current state of the planet’s interior.

They suspect that pockets of magma might still remain below the crust and the marsquakes are formed due to the rocky planet’s ongoing cooling and contraction.

The NASA team, however, has declined to comment until their results are published in a peer-reviewed journal, but other scientists are pretty excited at the prospect of Mars’s seismic activity.

“Mars has just become a bit more alive to us with these data,” said planetary geologist Paul Byrne, who wasn’t involved in the study.