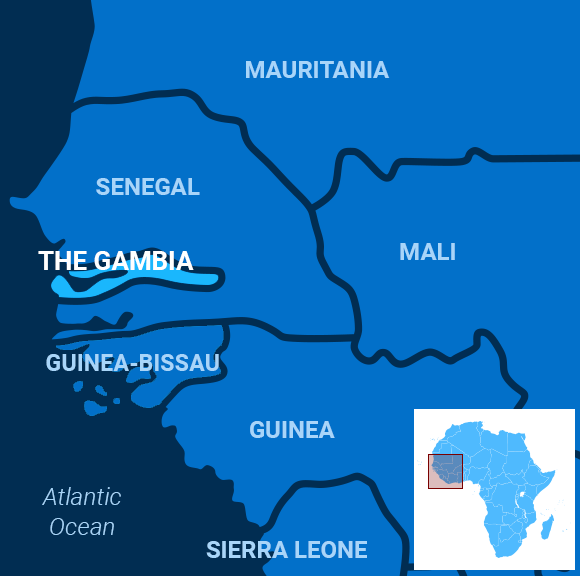 No Time for Promises

Gambian President Adama Barrow made a pledge when he ended the 22-year rule of ex-dictator Yahya Jammeh in 2016. After winning a tense race, Barrow said he would lead a provisional government for three years, then call elections.

Barrow recently announced that he would fill out his five-year term until 2021, sparking protests from citizens who called for him to hold elections as he promised, explained World Politics Review. He also created a new political party so that he can run for re-election when that term ends, Bloomberg reported.

“In my view, his time has been a missed opportunity,” Gambian human rights activist Madi Jobarteh told Al Jazeera in a story that described the local economy as in shambles. “What we have come to see is Barrow going against his own promises and adopting some practices of the former regime, not in terms of arbitrary arrests and enforced disappearances, but with the disfigurement of rule of law, lack of transparency and misuse of public resources.”

Leaving office now could put too many reforms and legal inquiries in jeopardy, countered Barrow, according to the African Press Agency. Indeed, writing in African Arguments, scholars Maggie Dwyer and Ismaila Ceesay wrote how Barrow might need to win re-election in order to gain the mandate necessary to tackle major changes, like downscaling Gambia’s unsustainable military spending.

Jammeh was forced to flee the country and now lives in exile in Equatorial Guinea. He stands accused of embezzling millions and committing atrocious human rights violations. His legacy as a world leader persists, however.

For more than a year, Gambia’s Truth, Reconciliation and Reparations Commission has been examining Jammeh’s reign, revealing details of his graft and terror. His “Junglers,” or secret police, kidnapped, tortured, murdered, raped and conducted witch hunts, Radio France Internationale reported. The commission is now determining whether Jammeh should be remitted to the Hague to face justice.

His brutal regime, coupled with the present economic mess, drove many Gambians to migrate to Europe, like those featured in this Associated Press story. One might say they are looking for new promises.

US and Iraqi officials reported no casualties or heavy damage, and Iran’s Supreme Leader Ayatollah Ali Khamenei said the attacks gave the US “a slap in the face.”

The retaliatory strikes came a few days after a US drone strike in Iraq killed Maj. Gen. Qassim Soleimani, Iran’s second-most powerful official and an important figure in Iranian military operations in the Middle East.

Analysts and US officials believe Iran intentionally missed areas that were populated by American troops and the strikes were calibrated to send a message without triggering a US military response.

Iran’s Foreign Minister Mohammad Javad Zarif tweeted that Wednesday’s strike was meant to be proportionate to the attack that killed Soleimani and that Iran doesn’t “seek escalation or war.”

More than one billion animals have perished in Australia as a result of the record-breaking wildfires that have wracked the country since September, NBC News reported on Wednesday.

Professor Chris Dickman at the University of Sydney estimated that 800 million animals have been killed in the state of New South Wales alone. He believes that the number is higher on a national level.

Dickman’s figures include animals that were killed in the fires and those that died from indirect causes, such as starvation and habitat loss. The estimate includes mammals, birds and reptiles, but not frogs, insects or other invertebrates.

He explained that because Australia sees the effects of climate change before other parts of the world, the wildfires could be a preview of what might happen globally.

More than 32,000 square miles have burned, and more than 120 fires are still active across two Australian states.

Australia boasts a rich diversity of animals, and scientists are concerned that the fires could drive entire species into extinction or permanently change Australia’s ecosystem.

Algeria’s new President Abdelmadjid Tebboune formed a panel on Wednesday to amend the country’s constitution and bring to an end the months of protest that have gripped the country, Reuters reported.

Tebboune was elected last month to replace longtime President Abdelaziz Bouteflika, who was forced to resign in April following massive protests against his decision to run for a fifth term.

Algerian protesters rejected the elections, arguing that the vote was illegitimate because it left the country’s elite in control of important positions.

The new 17-person constitutional committee will look into all aspects of the state’s organization and come up with proposals to give a greater role to the judiciary and parliament.

The committee will have three months to submit proposals for discussion, following which the proposals may be sent to parliament and finally put to voters in a referendum.

Tebboune is also trying to diversify the oil-reliant economy by encouraging investment in sectors other than energy to reduce Algeria’s dependence on imports for food and other goods. Currently, such imports cost Algeria more than $40 billion annually.

The Mayas built one of greatest civilizations across central America, and then they mysteriously declined between AD 800 and 1000.

The ancient people had cities with sophisticated irrigation systems and infrastructure, including pyramid temples and other huge stone buildings.

New technology has revealed traces of some of their cities under heavy foliage, but archaeologists recently found the remains of a large Mayan palace about 100 miles from the tourist hotspot of Cancun, in Mexico, the Guardian reported.

The building in the ancient Mayan city of Kuluba is more than 1,000 years old and is part of a larger complex that includes two residential rooms, an altar and a large round oven.

Archaeologists also found a burial place and hope that forensic analysis of the bones can reveal more about the people living in the region.

There’s no clear consensus among historians as to whether war, disease, climate or politics led to the decline of the Mayas.

Conservationists, meanwhile, are trying to bring back some of the forest cover – which was cleared during earlier excavations – to protect some of the buildings’ delicate features.

“This would mean reforesting specific sites so that trees can provide protection … for those structures which still have some of the original paint colors,” said conservationist Natalia Tangarife.

Correction: In Wednesday’s Discovery section, we used the term “monkey” to refer to “chimpanzees” in our “Do the Boogie-Woogie” item. Chimpanzees are a species of great apes that includes gorillas and bonobos. We apologize for the oversight.