Many of you often ask us, why can’t you offer more positive news? Well, today, we take a small step toward redressing that imbalance with a story from Greece, which over the past five years has played host to hundreds of thousands of refugees fleeing war and conflict, many of them children.

Our report, the first of a new, occasional series to run on special holidays, features the HOME Project, which assists refugee children who arrive alone. It’s one of many good works by organizations around the world, trying to make a difference.

From all of us at DailyChatter, our warmest best wishes for the holidays and for peace and good health in the New Year.

ATHENS – In 2016, 15-year-old Asma from Afghanistan boarded one of the thousands of dinghies leaving the Turkish shores for Greece.

She was six months pregnant.

Asma’s family fled Afghanistan for Iran out of fear for their lives, and could only afford to send one person even further, to Europe: They sent Asma.

“What we did was very difficult,” Asma recalled of the journey from Iran to Greece with Hamid, also 15, the son of another refugee family and the father of her child. “But we had to do this.” 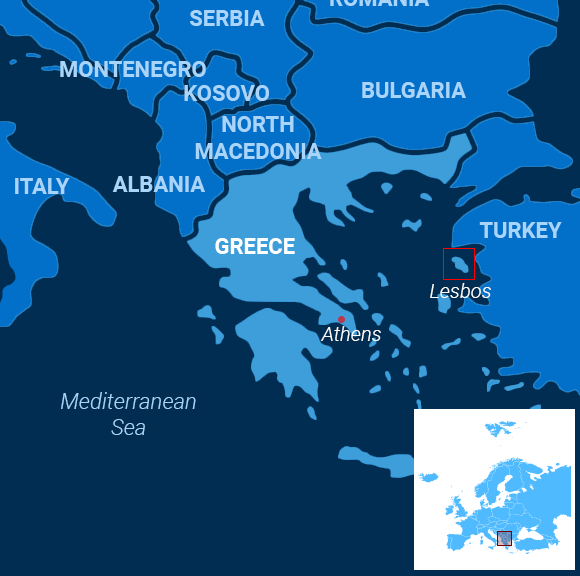 Arriving on the island of Lesbos, Asma was one of the millions of people from Africa, the Middle East and Asia to cross borders into Europe during the continent’s so-called Refugee Crisis in 2015 and 2016. Sixty percent of the new arrivals entered through Greece.

The numbers have dwindled in the years since. Even so, migration flows are on the rise once again, with a 35 percent spike in arrivals over 2018 to reach 120,000 this year, according to the United Nations’ refugee agency.

Due to her pregnancy, Asma and Hamid were both immediately sent by the National Center for Social Solidarity, in charge of assigning shelter spots to unaccompanied minors, to the HOME Project, a nonprofit in Greece serving these children.

The nonprofit was created after the leadership of the social responsibility program of the Libra Group – an international conglomerate operating in numerous sectors, including aviation and energy – noticed how three-quarters of these unaccompanied children ended up in detention centers and refugee camps, or on the streets.

The organization wanted to help. 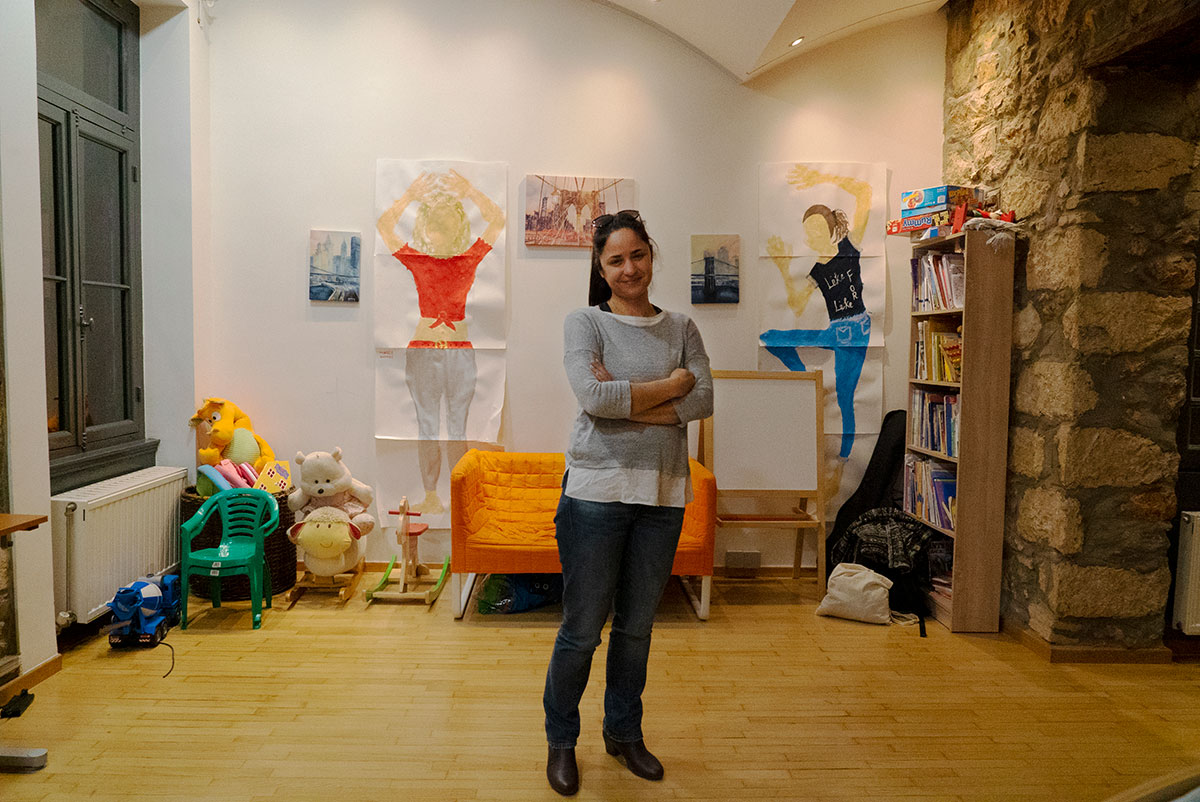 ATHENS, GREECE – Maria Kaldani, a social worker with the Home Project, works with refugee children like Asma who have arrived in Greece alone.

At the HOME Project, they gave children a bed, but also access to legal, health and social services and assistance with enrollment in school. The aim is to either support these children until they reunify with their families living in other EU counties or integrate them into Greek society.

Out of 5,200 unaccompanied minors in Greece today, Asma is one of the luckier ones.

That’s because in Greece, living conditions for refugees are appalling, and that doesn’t exclude children.

A report from the European Court of Auditors last month described the conditions in a refugee camp on Samos island: “The capacity of each container was for 8 to 10 boys, but 16 were staying in each, and even sleeping on the ground.” The report also notes how 78 children were sleeping in tents or in abandoned, derelict houses outside the camp even during winter, and nine girls were sleeping on the floor in a 100-square-foot container next to the police station, with no bathroom or shower.

“This country needs to turn a page on how this (refugee) movement is handled,” said UN High Commissioner for Refugees Filippo Grandi, who visited Greece last month.

Even with decent care, these children face big obstacles.

For example, about 80 percent of those at the HOME Project shelters don’t have asylum yet – they’re either waiting anxiously for the decision or have been rejected already.

At the same time, the conservative government of the New Democracy party, elected in July, has recently tightened the country’s asylum laws. Now, all unaccompanied minors over 15 arriving from countries deemed “safe” – such as Pakistan; parts of Afghanistan; Bangladesh and Egypt – won’t be considered vulnerable and are subject to deportation.

The new provision will affect the status of the majority of unaccompanied minors in Greece today as they hail from countries deemed “safe” and 93 percent of them are now over 15.

“The fact that a country might not have a war doesn’t mean it’s safe (for these children),” said Maria Kaldani, a social worker at the HOME Project who works with Asma. “But we’re still waiting to see how the new law will be implemented.”

Meanwhile, Greece remains overwhelmed with processing the newcomers. Most refugees applying for legal status now receive their first appointments in 2022 or even in 2023. That’s impacting the children.

“Staying in Greece for three years in transit, children often end up living eight years of their lives as a refugee,” said Kaldani. “That’s just not healthy for any minor or adult.”

As a result of the uncertainty, some children feel they can’t move ahead or plan for the future. Many run away before they turn 18 in the hopes of getting asylum in another EU country.

Meanwhile, the government has also banned all asylum seekers from access to primary healthcare. The staff at the HOME Project spends a large portion of their budget getting the children medical care.

“Many of the children arriving in Greece suffer from chronic conditions like scoliosis or kidney disease,” said Kaldani. “At the same time, most of the children that have had traumatic experiences in their home countries or even spent six months in refugee camps in Greece may need expensive psychiatric drugs.” 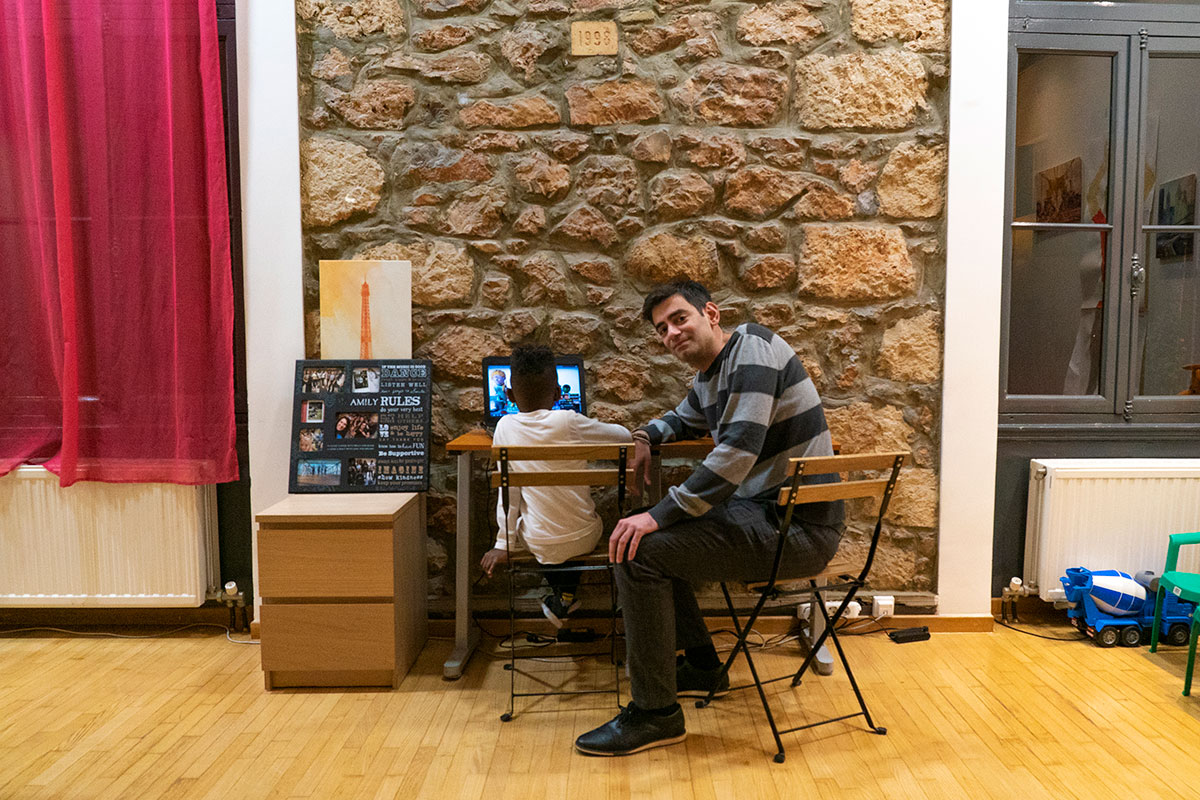 ATHENS, GREECE – Vassilis Michailidis, chief of staff of the Home Project, is working with one of the refugee children that arrived in Greece alone.

The lack of access to public healthcare prevents many of these children from enrolling in school because they lack the documents proving they have had the required vaccines.

“We’ve spent money from our budget and also work with other NGOs to get our children vaccinated,” said Fotis Parthenides, a social worker who oversees all HOME Project shelters.

Some vaccines, though, cost as much as 400 euros.

As a result of that and the lack of documents proving vaccinations, just a quarter of all refugee children went to class in the last school year. This year, even fewer schools have prep classes.

“From the 14 different public schools our children attend, only two have prep classes for the kids that don’t speak Greek,” said Parthenides.

Meanwhile, the anti-immigrant sentiment that has risen in Greece over the past few years is having an effect, he added.

“There are teachers in the public school that don’t want refugee children in their class and threaten to kick them out of school with the excuse that their Greek is bad,” he said.

For Asma, however, because of the HOME Project and other aid, life has some regularity.

She takes the subway to the American Community Schools (ACS), a private international school in Athens, where she works toward getting an American high school diploma, courtesy of a scholarship by the Massachusetts-based Shapiro Foundation.

She’s changed, say those who know her.

“The HOME Project has a great holistic approach to dealing with children, is well-organized, and we’ve been working with them since their beginning in 2016,” she added.

Tokatlidou says if Asma continues to go to school, she will graduate in three years.

Even then, she and others reaching the age of maturity can still receive care from the HOME Project: Since the organization doesn’t depend on public funding, it doesn’t have to force those who turn 18 to leave.

“Three of our former kids are now working inside the shelter,” said Vassilis Michailidis, chief of staff at the HOME Project. “Another 30 have found jobs through our contacts.”

Back at the shelter, Parthenides is playing with Asma’s toddler as Asma looks into the future.

Parthenides turns to her and says, “We’re keeping you here, Asma, with your baby.”

Editor’s note: Asma and Hamid’s names have been changed and certain details about them withheld to protect their identity because they are minors.

It’s not Christmas without the defining Christmas tree.

The ornately decorated conifer is a tradition in many households during the Christmas period, and it’s a very old one, Time magazine reported.

Historian Judith Flanders noted in her 2017 book “Christmas: A Biography” that the first Christmas trees emerged in present-day Germany during the 15th century.

In 1419, a guild in Freiburg set up a decorated fir to celebrate the feast of Adam and Eve, which fell on Christmas eve. The tree – decorated with apples, nuts, and gingerbread – would symbolize the tree of knowledge in the Bible story, and its popularity started spreading.

Flanders reported that the “first decorated indoor tree” was recorded in 1605, in Strasbourg, now in modern-day France. The city also had the oldest Christmas tree market back then, where sellers sold “Weihnachtsbäume,” or Christmas trees.

In North America, references to Christmas trees in private homes were documented in the late 18th and early 19th centuries, thanks to European immigrants and missionaries.

It was only later in the 19th century when gigantic outdoor Christmas trees started appearing in American cities.

The electricity lobby pushed for the first “National Christmas Tree” at the White House as a publicity stunt for the benefits of electricity.

As times changed, so did the trees: In the mid-twentieth century artificial trees started replacing the real fir and pine trees that once decorated American homes.

Going for the real deal might also be the right choice to keep traditions alive, A.R.C. Jones, a professor at Canada’s MacDonald College, told Time magazine back in 1964.

“We live in an artificial environment,” he said. “The Christmas tree is one of the few things left that is natural.”