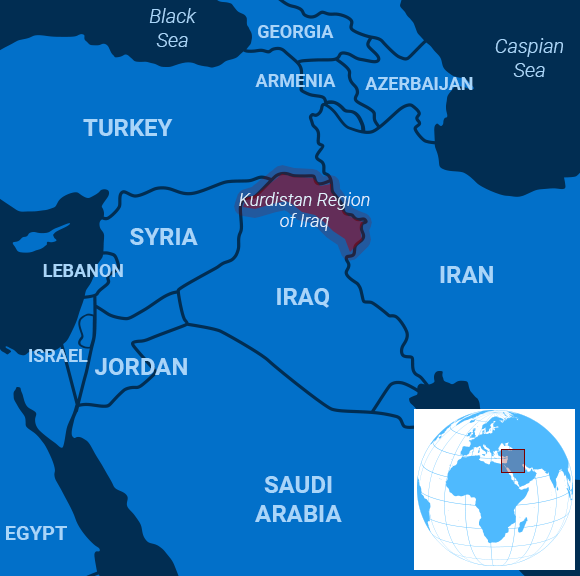 Of Ironies and Tragedies

Kurds in Iraq voted for independence by a landslide two years ago.

Since then, their semi-autonomous Kurdish Regional Government in northern Iraq has lost 40 percent of its territory to the central government’s forces while the economy, already struggling amid years of war against the Islamic State, has suffered a downturn.

Indeed, the past decade has seen the rise and fall of the dream of Kurdistan becoming an independent country.

Writing on the website of the Kurdish news agency Rudaw, freelancer Paul Iddon described how Kurdistan had experienced an economic boom but also the horrors of the Islamic State since 2010.

Today, Kurdistan is saddled with hundreds of thousands of refugees from those violent years.

In addition to the financial costs, the Kurdish Regional Government has struggled to handle the needy cases. Human Rights Watch recently claimed it was imposing too many restrictions on the refugees, for example, in a search for members of the Kurdistan Workers Party, or PKK, whose separatist forces in Turkey’s Anatolia region have been battling Turkish army troops for years. The US has deemed the PKK a terrorist organization.

The crackdown on the PKK in Iraqi Kurdistan illustrates how the Kurds aren’t a monolithic community. In Syria, too, the Kurds are divided on sitting down with President Bashar Assad, their erstwhile enemy in that country’s bloody civil war.

Of course, the American decision to withdraw support for the Syrian Kurds, previously US allies in the fight against the Islamic State and a counterbalance to Iranian, Russian and Turkish influence in the region, was arguably also an indignity that undermined Kurdish unity.

The irony is that the Kurds’ hopes rose most steeply in recent years when they were fighting most valiantly against their worst enemies. Now, their enemies are largely vanquished but the Kurds can hardly claim victory.

“Decades from now, the rise and fall of Daesh (the Islamic State) will probably be remembered in the same breath as the rise and fall of Kurdish hopes of statehood,” wrote Brookings Institution senior fellow Omer Taspinar in Arab News, an English-language newspaper in Saudi Arabia. “That Kurdish aspirations of independence in Syria and Iraq should have suffered the same fate as Daesh is, of course, an irony of tragic proportions for the Kurds.”

Still, the Iraqi Kurds recently concluded a deal with the central government in Baghdad involving their share of Iraq’s oil wealth. If the Kurds can stay at peace, they can build on the foundations they have laid for themselves.

Pope Francis abolished the “pontifical secret” used to protect clergy in sexual abuse cases Tuesday, in a move that could facilitate cooperation with authorities and give victims more rights and redress, the Associated Press reported.

The pontifical secret is the highest form of confidentiality in the church, and church leaders have previously asserted that the rule protects the privacy of the victim and the reputation of the accused.

The Vatican’s main sex crimes investigator described the reform as an “epochal decision” that will facilitate coordination with authorities and open up lines of communication with victims.

The new law comes as Pope Francis faces mounting pressure for the way the Vatican is handling sexual abuse perpetrated by members of the clergy.

Last month, an Argentine court convicted two Catholic priests for sexually abusing children at a school for the deaf from 2005 to 2016, the Wall Street Journal reported.

A Pakistani court sentenced former President Pervez Musharraf, a retired four-star general, to death for high treason on Tuesday, the first military chief to be charged with such a crime, the BBC reported.

The three-member court accused Musharraf of suspending the constitution in 2007 to impose emergency rule in a move that would extend his term.

Musharraf argued that the case against him was politically motivated and that his actions in 2007 were agreed to by the government and the cabinet.

The former military leader has been in Dubai since 2016 for medical treatment and has refused to appear before court despite multiple court orders to do so.

Musharraf came to power during a 1999 coup and was president from 2001 until his resignation in 2008.

The case against him originally began in 2013, when then-Prime Minister Nawaz Sharif initiated a trial against Musharraf.

Musharraf’s conviction could set a precedent for legal judgments against Pakistan’s powerful military, which holds sway over the country’s politics and government.

Tebboune won the Dec. 12 poll with a 58 percent vote and is set to become the country’s president for the next five years.

He replaced former President Abdelaziz Bouteflika, who resigned in April after protests erupted over his decision to run for a fifth term.

Tebboune vowed to reach out to protesters and fight corruption, but many consider the new president part of Algeria’s political establishment and a close ally to Bouteflika, according to the Africa Report.

Demonstrators also rejected the elections because they were organized by the power structure they aim to topple.

Despite his election, the protests are expected to continue.

In Greek mythology, the chimera was a fire-breathing hybrid monster of three different animals: a lion with a goat’s head on its back and a tail that ended with a snake’s head.

To modern scientists, however, chimeras are organisms made of cells from two different species.

The researchers combined genetically modified monkey stem cells with fertilized pig embryos, then implanted the embryos into sows and allowed the pregnancy to continue to full term.

More than 4,000 embryos were implanted, but only 10 piglets were born, of which only two were chimeras. Unfortunately, all the piglets died within a week.

In their study, researchers found monkey cells in some tissues of the chimeric piglets, but only in small proportions: between one in 1,000 and one in 10,000.

They suspect that the piglets died from the in-vitro fertilization (IVF) process, rather than chimerism. IVF doesn’t work as well in pigs as it does in humans and other animals.

The team said that the purpose of the study is to help grow human organs in animals for transplants, and ultimately develop human-animal chimeras.

But the researchers noted that there’s a long way to go – and a big ethical quagmire to overcome – before the creation of human-animal hybrids.