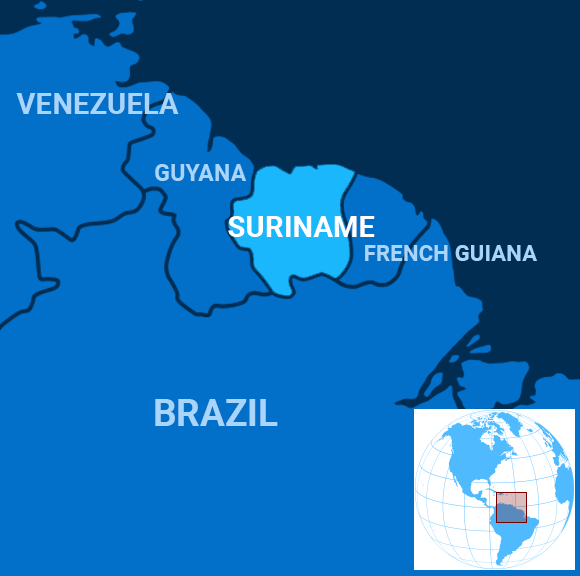 Late last month, a military court in Suriname found the country’s president Desi Bouterse guilty of murdering 15 political enemies nearly four decades ago and sentenced him to 20 years in prison.

Bouterse was on a state visit to China when the verdict was announced. One might have expected the decision to undermine his efforts in Beijing as opposition leaders back home called for him to resign.

Instead, the 74-year-old returned to his country on South America’s northeastern coast with a $300 million deal for China’s help with improving infrastructure, expanding solar power and constructing new 5G internet services. A crowd of supporters in purple National Democratic Party gear welcomed the president at the airport, the Economist noted.

As the Guardian explained, the court ruled that Bouterse had ordered the murders of anti-government critics in 1982, two years after Bouterse had led a coup against the government that took over the South American country following the end of Dutch colonial rule in the 1970s. Bouterse led Suriname as a military dictator throughout the 1980s, then was elected to the presidency in 2010 and won re-election in 2015.

Some welcomed the verdict. “This ruling has been too long in coming, but I am very happy,” Roy Ho Ten Soeng of the Dutch Suriname Friendship Association told DutchNews.nl, an English-language news website. “This is justice.”

Bouterse has always denied the charges. He maintains that the victims – a university professor, a journalist, a clergyman and other civilians, as well as two military officers – had been detained for plotting a counter coup and were shot when they tried to escape.

“The political game is played openly, so it was clear what was going to happen,” Bouterse said at a news conference that Reuters attended. “We will stay within the law and regulations. Politics needs to be answered with politics.”

But, speaking to Caribbean Life, a New York-based news outlet, opposition figures noted that the trial against Bouterse started in 2007, before he was president, showing that it was not politically motivated.  Later, the Associated Press reported that Bouterse tried to stop the case with an amnesty law which was later ruled unconstitutional.

Bouterse has vowed to appeal, a process that could take years. Meanwhile, the president has avoided the long arm of the law before. In 1999, a Dutch court tried Bouterse in absentia and found him guilty of drug smuggling. He never responded to the charges.

In fact, Bouterse is already planning on running for re-election to a third term in May 2020, reported Agence France-Presse.

He arguably has nothing to lose.

Military and paramilitary units were deployed to India’s northeastern states of Assam and Tripura Thursday as protests raged in the ethnically diverse regions over the passing of a controversial citizenship bill that excludes Muslims, CNN reported.

Security forces arrested almost 2,000 people in Tripura, while the army imposed curfews and shut down internet services in Assam.

Even so, thousands defied the curfew Thursday after the All Assam Students Union asked people to gather for a public meeting against the citizenship bill.

The bill, which was passed earlier this week in the lower and upper houses of parliament, will facilitate the path to Indian citizenship for non-Muslim minorities from three neighboring countries.

Critics, however, argued that the law goes against India’s secular constitution and is an attempt by the government to marginalize Muslims.

Others stressed that the bill will bring an unwanted influx of immigrants from neighboring countries.

Chinese President Xi Jinping will visit Macau next week to announce policies to diversify the city’s gambling-dependent economy and further integrate it with mainland cities in China, a move seen as reward for being a good soldier unlike protest-gripped Hong Kong, Reuters reported.

Among the proposed policies, China plans to establish a yuan-denominated stock exchange and speed up the creation of a renminbi settlement center.

Beijing will also allocate more land to Macau to develop in areas such as education and healthcare.

Officials said that the new policies are a contingency plan to avoid any major market disruption in Hong Kong that could impact Chinese businesses, and are not aimed at undermining Hong Kong.

Anti-government protests have gripped nearby Hong Kong over the past six months.

The visit also comes as China and Macau celebrate the 20th anniversary of their union. The central government has praised the city for upholding the “one country, two systems” framework that governs both Hong Kong and Macau.

Israeli Prime Minister Benjamin Netanyahu will resign from all his other ministerial posts by Jan. 1. 2020 but will still keep his position as prime minister even as the embattled long-time leader faces criminal charges and new elections, Reuters reported.

Netanyahu’s lawyers made the announcement to the country’s Supreme Court Thursday, shortly after parliament voted to dissolve itself and set a new date for the country’s third general election within a year.

A local non-governmental organization sent a petition to the court demanding Netanyahu’s resignation from his ministerial duties in light of the recent indictments.

Under Israeli law, ministers facing criminal charges must resign, but there’s no provision regarding the position of prime minister.

The organization filing the petition said that Netanyahu’s decision to resign as a minister “was not enough,” and that his continued premiership is “a terrible shame on Israel.”

Netanyahu, meanwhile, has rejected the criminal charges as a witch-hunt against him, but it remains unclear if he’ll seek immunity from prosecution.

Despite the water scarcity, some of these regions – including Morocco and parts of southern and east Africa – lie in coastal areas prone to fog, where people are potentially able to obtain fresh water through fog-harvesting.

It’s a very cheap and clean method, but fog harvesting technology is still in its infancy, Cosmos Magazine reported.

Now, scientists are learning how to design better fog harvesting by studying how a certain beetle species can gather water from fog in the desert.

In their study, researchers wrote that the Namib desert beetles of southern Africa leaned their bumpy body against the fog-laden breeze in order to collect water droplets.

Observing the beetle’s unique body, the team developed several grooved and bumpy surfaces and blew fog past them in a wind tunnel.

They reported that bumpy surfaces were the best at collecting water droplets, but argued that they still needed to “play around” with it.

At the moment, the authors plan to develop fog harvesters for small-scale endeavors, such as camping equipment that collects fog water.

On a larger scale, the technology could be used to make fog-collecting tents for use in refugee camps, where clean water can be scarce.