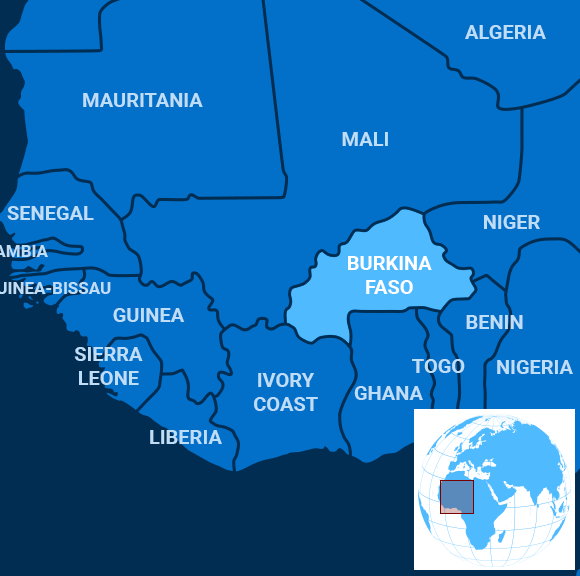 The New Fissure of Terror

The families of American diplomats were ordered out of Burkina Faso recently.

“There is no specific threat that prompted this decision, rather this reconfiguration of the US Embassy staffing profile will enable refocused operations to assist Burkina Faso in its struggle against violent extremist organizations,” the US Embassy in Ouagadougou said in a statement.

The US State Department also recently issued a “do not travel” advisory for the West African country, citing terrorism, crime and kidnapping.

As CNN explained, “terrorist networks operate with impunity” in Burkina Faso, “targeting public places of gathering, including hotels, restaurants.” Around 500,000 people have fled the country because of violence. The International Red Cross can’t send aid workers to certain regions because they are too dangerous. Thousands of schools have closed.

“Burkina Faso has replaced Mali at the epicenter of the Sahel’s security crisis,” said a headline in Quartz.

Indeed, much of the chaos that international forces have sought to end in Mali has become commonplace in neighboring Burkina Faso.

On Sunday, more than a dozen people were killed after gunmen opened fire at a church service in Hantoukoura, in the east, the BBC reported. Last month, gunmen killed 39 people in a convoy of Canadian mining company workers. It was not the first instance of the company encountering armed predators, the New York Times reported, noting that militants had killed at least 26 military personnel and injured 25 others between August and September. Those militants could be Islamic State members or criminals acting out local grudges.

Whatever their ideologies, the attackers often have few scruples. More than a dozen worshippers died in mid-October after armed men stormed a mosque in the northern city of Salmossi near the Malian border, Al Jazeera reported.

France has invested heavily in stability in the Sahel, the core of much of its erstwhile West African empire. The European country has 4,500 troops in Chad, Mali and Niger.

The endeavor has come at a cost. In late November, 13 French soldiers died when their helicopters collided as they hunted Islamist militants in Mali, Reuters reported. In May, two French soldiers died in a successful mission to free American and South Korean hostages in Burkina Faso. Last year, militants attacked the French embassy and the Burkina Faso military’s headquarters in Ouagadougou, killing eight and injuring 80.

Recently French President Emmanuel Macron announced that he would deploy forces to Burkina Faso at the request of local officials, according to Al Jazeera. Burkina Faso gained independence from France in 1960. Now, the former colonial power is working closely with local forces to prevent jihadists from taking over, the Defense Post reported.

This Euronews story provides context as to why leaders in Paris are determined to spend resources in the region, including fears of a new safe haven for terrorists and of jihadism spreading north. Reuters also detailed a harrowing connection between the Islamic State and gold mining in this region of Africa.

France was hit by one of the largest strikes in decades on Thursday, as public workers took to the streets of several cities to protest against President Emmanuel Macron’s pension reforms, CNBC reported.

The strike mainly impacted the transport and education sector, putting a halt to most railway and metro operations and closing most schools.

About 250 official demonstrations were planned across the country with more than 180,000 taking part.

Before his election in 2017, Macron promised to change France’s pension system, which has been considered one of the most generous – and expensive – in the world with some workers retiring as early as 50 and a majority by 60.

Those in the transit sector will lose their privileged early retirement.

Instead, Macron’s new plan will be a points-based system in which most workers would retire around the same age. The full details of his reform have not yet been officially introduced to Parliament.

Past attempts including one by President Jacques Chirac in 1995 to change the pension system have failed due to strong opposition from public sector workers.

Although polls show that a small majority support public workers, it is less than a decade ago. Analysts also note that the government’s argument that the strikes are an attempt by vested interests to preserve the inequalities created by the current pension system is finding more traction these days.

A rape survivor was set on fire by five men in the Indian state of Uttar Pradesh on Thursday, days after the gruesome rape and murder of a veterinarian in another state that has ignited outrage across the country, Al Jazeera reported.

The unnamed woman suffered 80 percent burns on her body and remains in critical condition.

Authorities arrested the five men, but the incident has been criticized by politicians and activists, who blame the ruling Bharatiya Janata Party (BJP) in the state for failing to protect women.

Last week, a 26-year old veterinarian was raped and murdered in southern state of Telangana, which sparked protests across the country earlier this week.

In an echo of demonstrations in 2013 and 2014, protesters took to the streets demanding justice for the victim and more safety for women, as well as a more open and responsive environment for women to report rape and assault. Most of the time, women fail to report out of fear or shame, the wire reported.

India’s National Crime Records Bureau reported that over 33,000 women were raped in India in 2017, but the figure is believed to be much higher.

The company, TVEL, said it would be impossible to convert the facility in order to produce radioactive isotopes for medical purposes, despite previous assurances by Russian officials that the project would continue after Iran’s controversial decision.

The suspension is a sign that Moscow is trying to distance itself from Iran’s nuclear activities that violate the 2015 nuclear deal.

Iran agreed to stop uranium enrichment under the deal but restarted the process after the United States withdrew from the pact last year and imposed new sanctions.

Last month, Tehran announced it was recommencing its nuclear enrichment at the fortified Fordo facility, adding that it would reverse its decision if European signatories of the deal help Iran bypass US sanctions.

The letter was dismissed by Iran’s foreign minister, Reuters reported.

Treatments against the human immunodeficiency virus (HIV) have advanced in recent years, but there’s still a lot of stigma surrounding the virus and AIDS.

Three New Zealand-based charities last week launched the world’s first sperm bank for HIV-positive donors with the aim of raising awareness and educating others about the illness, the BBC reported.

Sperm Positive allows HIV-positive men to donate their sperm, as long as they are on a successful treatment that prevents them from passing on the virus.

HIV will not be transmitted through sex or childbirth, as long the virus levels in the blood are very low.

The sperm bank doesn’t operate as a fertility clinic, but instead will connect people with local clinics if they agree to a match.

So far, three HIV-positive men have signed up to donate – all with undetectable viral loads.

One of the donors, Damien Rule-Neal, left his job after co-workers bullied him because of his condition.

Through treatments, he’s now healthy, married and has grandchildren.

“I’ve seen a lot of my female friends that have HIV go on to have children,” he said. “It shows that science and medication have given us that ability back.”