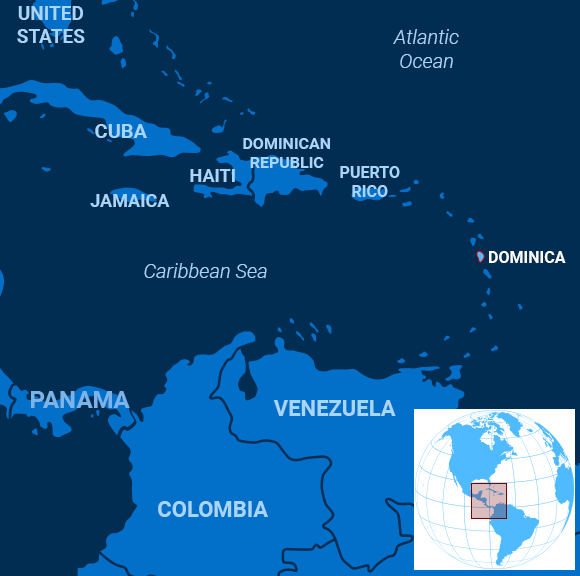 More than 200 people clashed with police in the Caribbean island of Dominica recently. The police fired tear gas and rubber bullets into the crowds associated with the opposition United Workers’ Party, according to Caribbean Life, a New York-based newspaper for readers linked to the region.

The protesters want the ruling Dominica Labor Party to enact voting reforms that might loosen its grip on power, the Associated Press reported. They called for changes like more oversight of voter registration and limits on Dominican citizens who live abroad returning home to vote. The government has allegedly purchased airplane tickets for expatriate voters.

The issue is coming to a head because the island, a former colony of both France and Britain, is scheduled to hold elections for seats in the local legislature on Dec. 6. The Dominica Labor Party has been in control for 20 years.

Some say the party has done much for the country.

The country has made progress in erecting protections against hurricanes that periodically ravage the island. “If all goes according to plan, Dominica will be able to bounce back from the next inevitable hurricane in a matter of weeks rather than years,” Travel + Leisure wrote.

But US diplomats and others in the Organization of American States have also expressed concerns about Prime Minister Roosevelt Skerrit’s plan to move ahead with elections without adopting reforms to the system. Among other changes, the diplomats wanted “removal of deceased persons and ineligible voters from the current electoral list.”

Skerrit is defiant. As the Cuban state-owned Prensa Latina reported, he said the elections would proceed without foreign interference.

Recent news revelations could potentially embarrass the prime minister, however. He might be the one benefitting from foreign friends.

An Al Jazeera investigative team recently discovered evidence of Skerrit accepting $470,000 from an Iranian businessman in 2014 who later became Dominica’s ambassador to Malaysia. The businessman allegedly was willing to use bribes to get the job because it gave him a diplomatic passport that included diplomatic immunity from Iranian officials, the news agency reported.

The businessman was eventually arrested and extradited to Iran, where he was sentenced to 20 years in prison on charges of stealing billions from oil transactions that flouted international sanctions. One of his colleagues charged with similar skimming was put to death, Dominica News Online reported.

A former prime minister of Dominica, Oliver Seraphin, also a Dominica Labor Party member, reportedly acted as a middleman in the ambassadorship-for-cash deal.

Someone is certainly destabilizing it.

The Point of No Return

Social justice and environmental activists are planning a large rally this week in Spain’s capital to demand more action against climate change, a demonstration coming on the sidelines of the 2019 United Nations Climate Change (COP25) conference in Madrid, the Associated Press reported.

On Tuesday, more than 50 world leaders arrived in Madrid for the summit in order to lay the framework for a new phase of climate action because, as UN Secretary-General Antonio Guterres said during the opening ceremony, the Earth is close to “the point of no return,” Euronews reported.

“We need a rapid and profound change in the way humanity does business, generates energy, builds cities, moves and feeds itself, eliminating our addiction to carbon,” Guterres said.

During the conference, the new European Commission President Ursula von der Leyen told participants that the Commission will unveil the EU Green Deal next week which aims to make Europe the first climate-neutral continent by 2050.

Despite the high targets, the European Environmental Agency released a report Wednesday saying that the bloc won’t be able to reduce its greenhouse gases by at least 50 percent by 2030, AP reported.

Algeria began a trial of several senior officials on corruption charges Wednesday, the result of months of protests, and coming just as the country gets ready to hold presidential elections next week, Reuters reported.

Former prime ministers Ahmed Ouyahia and Abdelmalek Sellal have been accused of “misappropriation of public funds, abuse of office and granting undue privileges.”

They and other officials and businessmen on trial were linked to President Abdelaziz Bouteflika, who was forced out of office in April after months of protests.

Fighting corruption is one of the key objectives of the protesters, who began rallying in the streets in February after Bouteflika announced he was planning to run for a fifth term.

Despite several high-profile arrests, demonstrators continue to put pressure on authorities and are planning to boycott the presidential elections.

They believe that the vote will not be free or fair while the ruling elite, including the army, remain in power.

Germany expelled two Russian diplomats Wednesday over the murder of a Georgian citizen in Berlin this summer, after evidence showed that the murder was linked to the Russian government, NPR reported.

German officials said that their Russian counterparts were not cooperative during an investigation into the murder of Zelimkhan Khangoshvili, a former Chechen insurgent commander who was seeking asylum in Germany.

The suspect was previously involved in the murder of a Russian businessman in Moscow back in 2013.

Russian officials have denied any involvement in the murder and have said they will retaliate by expelling German diplomats in Russia.

In recent years, the Russian government has been accused of several high-profile assassinations on foreign soil, including the poisoning of former KGB agent Sergei Skripal in Britain last year.

Being the largest animal in the world comes with a few perks for the majestic blue whales – who can measure over 100 feet long.

Not only does the marine mammal have a large heart, but also a very hardworking one, Live Science reported.

In their study, marine biologists recorded a blue whale’s heartbeat and discovered that it could skip a lot of beats when the animal was foraging for food.

Researchers mounted a special sensor on a male whale and monitored its movements for nearly nine hours off the California coast as the gargantuan creature repeatedly dove for food and resurfaced to fill its lungs with air.

The team explained that when air-breathing mammals dive underwater, their heart rates slow to redistribute more oxygen to the brain and heart.

It’s possible that blue whales’ hearts have reached a natural cardiac limit. That would prevent the whales themselves from becoming larger – and may also explain why there are no larger creatures on Earth.

Scientists argued that larger creatures would need a faster heart to pump more oxygen, but so far only the blue whale has one that suits.