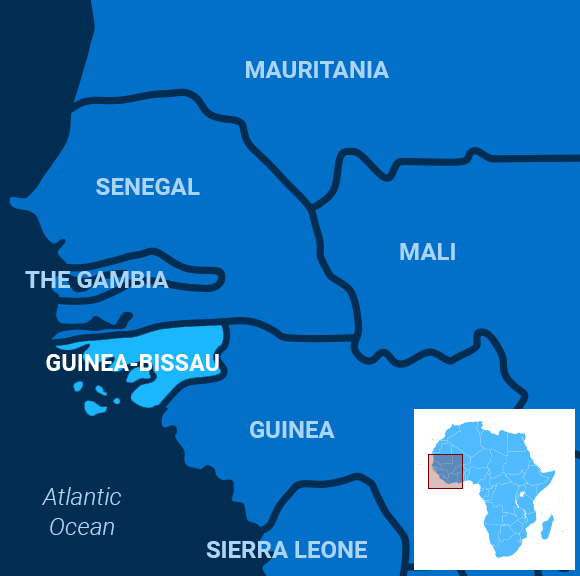 Guinea-Bissau is arguably a “narco state,” a country where drug money has corrupted every nook and cranny of the government, the economy and society.

Police recently seized 1.8 tons of cocaine from smugglers, for example. It was the second time in six months they had broken their record for the biggest drug haul in the West African country’s history, InSight Crime reported.

Not coincidentally, nobody is really in charge of Guinea-Bissau.

Voters went to the polls on Nov. 24 to elect a new president, and preliminary results are expected in a few days. But, given widespread graft and the multiple coups the nation has suffered since independence from Portugal in 1974, many wonder whether the country will successfully pull off a democratic transition.

Jose Mario Vaz, the country’s first democratically elected president to complete a five-year term since the introduction of multi-party elections in 1994, is running for re-election. “Corruption was installed at the highest level,” a Vaz spokesman told Voice of America. “Drug trafficking, with collaboration of a lot of people, was installed at the highest level, we needed to fight that. We needed to make reforms, but reforms are not easy.”

Voters have reason to be suspicious of Vaz’s lofty aims, however.

As University of Central Florida scholars Clayton Besaw and Jonathan Powell explained in the Conversation, the president’s term technically ended in June, but Vaz remained in office. At the time, he was in conflict with his political allies for refusing to support their nominee for prime minister, Domingos Simoes Pereira. Vaz then struck a deal with lawmakers to remain in office – though with limited powers – until the presidential election this month in exchange for approving another premier, Aristide Gomes.

In October, however, after violent protests and warnings from Gomes about a possible coup, Vaz sacked Gomes and appointed a new prime minister, Faustino Fudut Imbali, reported the South Africa-based Independent Online. The coup warnings especially stirred up fears, given how the military has repeatedly entered politics. But Gomes refused to accept the sacking, Al Jazeera wrote. Imbali, meanwhile, resigned after 11 days.

The changes led the African Union to issue a statement expressing “deep concern over the continued deterioration of the political and security situation” in the country.

Guinea-Bissau’s military has denied any interest in a coup. However, the generals have also rejected the Economic Community of West African States’ proposal to increase its military contingent in the country as a stabilization measure, wrote Political Analysis South Africa.

The organization helped The Gambia a few years ago when another leader refused to leave after losing an election.

Regardless, the electoral process must go on if Guinea-Bissau is to move forward. But politicians will need to respect the process – and each other – for the results to hold. And the military must stay out of the way.

And then, maybe, everyone will know who is actually in charge.

Ethiopia’s ethnic Sidama minority overwhelmingly voted to form their own self-governing region in a referendum that could inspire other ethnic groups to demand more autonomy, Ethiopia’s electoral board said Saturday, according to Reuters.

“For me it’s the day of resurrection,” said Unani Fikro, a member of a Sidama activist group.

The vote will now allow the Sidama, which comprise four percent of Ethiopia’s 109 million people, to form their self-governing region, and administer their own local taxation, education system, and security among other things.

Since he came to power last year, Abiy has allowed greater freedoms in the once repressive country.

His changes, however, have emboldened regional strongmen and encouraged other ethnic groups to demand more autonomy.

Calls for self-governance could threaten Abiy’s plans to unify the country ahead of the 2020 elections.

Colombians took to the streets of the capital, Bogota, over the weekend in a third day of protests against austerity measures and state corruption, the BBC reported.

The anti-government demonstrations began last week and soon turned violent, leading to the death of at least three people.

Protesters are angry over possible pension and labor reforms and criticized the government for failing to hold to the 2016 peace deal with the leftwing FARC rebels.

The government has denied they plan to make reforms to the pension and labor system. Meanwhile, President Ivan Duque promised to deepen the “social dialogue” with Colombians over their concerns.

Colombia is the latest South American nation to be gripped by unrest in recent months, following protests in Chile and in Bolivia.

France announced Sunday that a European-led maritime mission will be stationed in the United Arab Emirates to monitor Gulf waters amid increasing regional tensions with Iran, Agence France-Presse reported.

The situation in the Gulf has worsened since May following several attacks on oil tankers that the United States and its allies have blamed on Iran.

Iran has denied the charges.

The mission will be run by around 10 to 15 staff members deployed at the French naval base in Abu Dhabi and marks a shift in policy from European powers, who had previously preferred to take a wait-and-see attitude.

The US government launched a maritime coalition earlier this month to protect ships in the Gulf waters and the strategic Strait of Hormuz.

Still, most European governments have refused to take part in the coalition, as they are trying to save the 2015 nuclear deal with Iran.

French Defense Minister Florence Parly, however, said that France “will coordinate with the Americans” and plans to help Saudi Arabia boost its defense system.

At its peak, the Roman Empire stretched from North Africa to Britain to the Middle East, and migration – both voluntary and forced – was common.

In fact, archaeologists wrote in a recent study that before the empire’s decline, many residents of Rome were of eastern Mediterranean or Middle Eastern ancestry.

Researchers analyzed ancient DNA from 127 people buried at sites around the city and from different eras before, during and after the imperial period, Science Magazine reported.

More than 9,000 years ago, they noted, the hunter-gatherer inhabitants of the area genetically resembled other populations in Europe.

Things started changing when farmers from Anatolia – what is now Turkey – started moving westward 9,000 years ago and reshaped the continent’s genetics.

Over time, Rome became a metropolis and its territory expanded, and so did its genetic makeup.

Between 27 BC and 300 AD, the empire housed more than 50 million people across its various regions, and its capital city’s genetic diversity became “overwhelming.”

The samples from that period suggested that most residents had ancestry connecting them to Greece, Syria and Lebanon.

All that came to a halt when the empire split in the 4th century and many of Rome’s inhabitants started flocking to Constantinople – modern-day Istanbul – to the east.

Co-author Jonathan Pritchard noted that migration is not a new phenomenon and was present in antiquity.

“It’s clear from ancient DNA that populations have been mixing at really high rates for a long time,” he said.