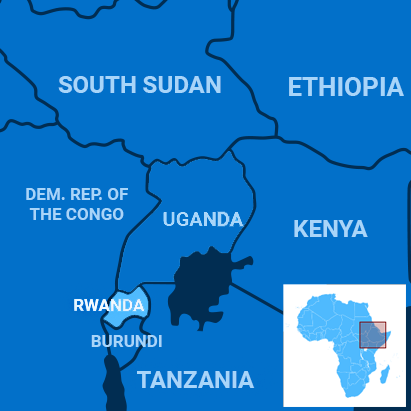 Rwandan President Paul Kagame, in office for almost 20 years, delivered a blunt statement to his enemies during a recent swearing-in ceremony for cabinet members and military brass.

“I want to warn some people among us who hide behind different things. They hide behind politics, democracy, freedom that we actually want,” Kagame said, according to Xinhua. “The people behind this nonsense and even backed and praised by people from outside…are going to face it rough.”

The president stressed he would not tolerate anyone who propagated a “politics of division and hate, and genocide ideology,” wrote the New Times, a local newspaper.

But Kagame was presumably addressing critics who describe him as authoritarian and accuse his security forces and agents of illegal detentions, torture, false charges and other ways of harassing political dissidents, PBS NewsHour reported.

Indeed, opposition members often go missing in Rwanda. The latest was 29-year-old Eugene Ndereyimana, a vocal critic of Kagame who was hoping to run against the president’s Rwandan Patriotic Front.

“Where is he now? Is he alive, or was he killed by police?” asked a town elder in Kibungo, Rwanda, in the Washington Times. “What kind of country is this where one cannot speak freely? He is not the first one to go missing. We are losing our people in mysterious ways.”

A story in CNN listed other dissidents who are now missing.

What is remarkable about all this is that Rwanda is held up as a model of peace and prosperity on the continent. Indeed, Kagame’s version of stability has been pretty good for a country forever scarred by the genocide of 1994. The capital of Kigali is becoming a tourist attraction, reported Bloomberg in a video that featured clean streets, low crime and a growing economy.

Some of Rwanda’s prosperity might be ill-gotten. Citing United Nations reports, the San Francisco Bay View National Black Newspaper noted how the country is likely benefiting from the illegal gold trade, often via routes dating back to its participation in wars in the Congo.

Still, Al Jazeera recently concluded that “Kagame’s Rwanda is still Africa’s most inspiring success story.” It was Kagame who, as commander of a force of uneducated guerrilla fighters, managed to put an end to the genocide. He has been president since 2000 and is credited with bringing stability to the country and leaving old grievances in the past as much as possible.

Kagame’s mix of appeal and repulsion led Politico to dub him the “darling tyrant.”

As in many countries in Africa and around the world, analysts say it’s likely the Rwandans will get tired of their leader, hit the streets and eventually remove him. If that happens, one can hope it’s not at the expense of the peace and prosperity they won so dearly.

Swedish prosecutors dropped their investigation into rape allegations against Julian Assange on Tuesday, a move that might facilitate the extradition of the WikiLeaks founder to the United States on charges of releasing classified material, a federal offense, the Wall Street Journal reported.

Deputy Director of Public Prosecution Eva-Marie Persson said that the evidence wasn’t strong enough to file an indictment after five witnesses, including two new ones, were interviewed.

The decision eliminates the issue over Assange’s extradition from the United Kingdom, where he is currently serving a 50-week jail sentence for skipping bail to avoid extradition to Sweden.

In 2012, he fled to the Ecuadorian embassy in London where he remained until April when the South American nation stripped Assange of his diplomatic protection.

A British court on Feb. 24 will decide whether Assange will be extradited to the US, where he is expected to be charged under the Espionage Act for WikiLeaks’ disclosure in 2010 of classified documents relating to US military operations.

Assange says his disclosure helped expose alleged wrongdoing by the US government.

Should I Stay Or Should I Go…

Talks between the United States and South Korea broke down Tuesday after both nations failed to reach a compromise on sharing the costs of keeping US troops in South Korea, Reuters reported.

The breakdown is a rare public sign of discord between the two nations which have kept an “airtight” alliance for 70 years against North Korea.

South Korean officials complained that Washington has demanded a $5 billion a year contribution to maintain 28,500 US military personnel on the peninsula, although the amount hasn’t been publicly confirmed by either side.

South Korean lawmakers agreed to pay around $890 million this year, but US President Donald Trump has said that American military presence in the peninsula was “$5 billion worth of protection.”

The dispute has stirred debate in the country about the presence of US troops, with several activist groups demanding a reduction or even the withdrawal of military personnel.

South Korean lawmakers, meanwhile, have accused Washington of threatening to pull troops, but the country’s negotiators have said that the United States has not raised the issue of a reduction or withdrawal of its troops.

The Little Island That Could

Hundreds of protesters and police clashed in the capital of the Caribbean nation of Dominica after demonstrators demanded to see the country’s president over election reforms, officials said Tuesday.

The former French and British colony of about 75,000 people is holding general elections on Dec. 6, with the opposition demanding reforms that could reduce the ruling party’s electoral advantage, the Associated Press reported.

Security officials said that on Monday night, protesters tried to march to President Charles Savarin’s home to call for more rigorous checks on voter registration. They are also seeking to prevent expatriate Dominican citizens from returning to vote in elections.

Prime Minister Roosevelt Skerrit’s government has not enacted any reforms, and the opposition has accused the government of vote-buying by providing supporters abroad with tickets home around election day.

The situation in the small island has been tense over the past few days as protesters have called for electoral reforms echoing a demand from the Organization of American States at a meeting in August, Telesur reported.

A Fake, a Life

Rhinoceros populations are severely threatened by poachers, who hunt them for their prized horns that can go for up to $60,000 a kilo (about 2.2 pounds).

Rhino horns are used in traditional Chinese medicine to treat rheumatism and gout, but there’s no evidence they have any pharmaceutical properties beyond placebo.

Scientists and conservationists are now trying to counter this trade and prevent poaching by introducing a fake version of the rhino horn, the Economist reported.

In their study, zoologist Fritz Vollrath and colleagues developed a cheap and simple knockoff made out of horsehair that looks similar to the real thing.

Researchers noted that rhinos and horses are closely related and that rhino “horns” are not bony, like the ones found in bulls and oxen. Instead, rhino horns are made out of hair bound tightly together by a mix of dead cells.

Vollrath’s team was able to collect and glue together horsehair using a fibrous protein-rich glue of the sort produced naturally by spiders and silkworms, and let it dry in an oven.

They conducted several tests to ensure that the fake horn was similar to the real product, and the forgery passed them all.

The team hopes that putting the fake product in the market will reduce prices and sabotage demand. And allow a deeply endangered animal to live.