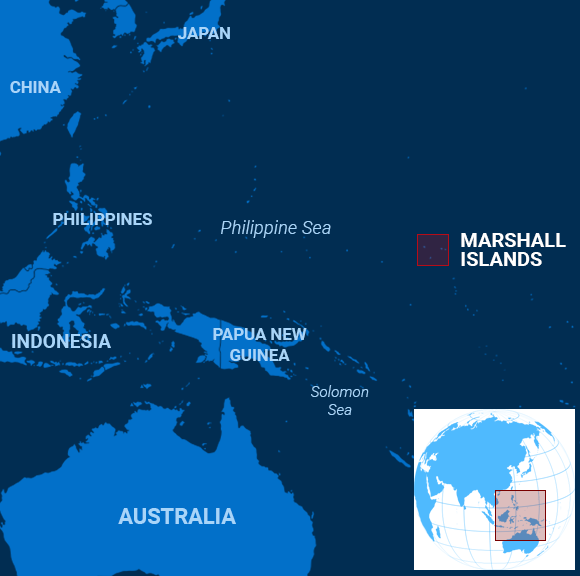 A Tsunami of Disenfranchisement

In the 1940s and 1950s, the United States exploded 67 nuclear bombs, conducted biological weapon tests and dumped 130 tons of soil from Nevada atomic sites in a concrete bunker in the Marshall Islands.

Columbia University researchers recently found that radiation levels were already high in the Marshall Islands, an archipelago that technically is a “freely associated state” of the US, meaning it’s not a colony but willingly ceded some powers to American officials.

Now, thanks to a remarkable series of articles in the Los Angeles Times, the world knows that rising seas might collapse the domed structure, risking the release of 3.1 million cubic feet of radioactive material into the Pacific Ocean.

That’s just one threat to safety on the islands. The government has declared a public health emergency over dengue fever. Last year, Honolulu Civil Beat, a nonprofit news organization, exposed an illegal child adoption ring that suggested local and American officials were asleep at the switch while families suffered.

How has a small country of atolls lying between Hawaii and Papua New Guinea managed to let so much get out control?

One explanation could lie in the controversy that has animated voters before elections on Nov. 18.

As Radio New Zealand explained, a 2016 law banning absentee ballots prevents around a third of the electorate from voting in the election for lawmakers who in turn appoint a president. In October, the country’s Supreme Court declared the law unconstitutional but ruled the government need not fix the issue until after this month’s vote.

“Imagine a democracy where one in three citizens cannot decide who gets to rule their country,” wrote the South China Morning Post. “Where citizens fleeing nuclear radiation and rising sea levels have been forced from their homes and must cast their votes by post.”

Incumbent President Hilda Heine supported the law, ostensibly to combat voter fraud. But critics charged that she sought to retain control as the Marshall Islands renegotiates important deals with the US, even as many others on the islands believe the country should improve its ties with China to win foreign investment to help convert irradiative land into property for commercial development.

Heine would retain relations with Taiwan, while others might rethink that position. China has been investing in and sending aid to small countries around the world that subsequently have withdrawn their recognition of Taiwan, which leaders in Beijing view as a breakaway province.

Small islands, big problems, and now a vote that underlines an existential question. But it might be one answered without voter oversight.

We Won’t Have It!

The European Union and the United States expressed their support for Georgia’s anti-government protesters on Monday, rallying against the ruling party’s decision to reject electoral reforms, Agence France-Presse reported.

More than 20,000 people demonstrated in front of parliament in the capital on Sunday, the biggest anti-government rally in years.

Demonstrations began last week when lawmakers from the Georgian Dream party voted down legislation to hold parliamentary elections next year under a new proportional voting system.

The opposition accused party leader and Georgia’s richest man, Bidzina Ivanishvili, as being behind the move, even as Georgian Dream officials rejected calls for early elections and accused the opposition of “destabilizing [the] political processes.”

Ivanishvili initially promised “large-scale political reform” after a summer of demonstrations that saw 240 people injured in a police crackdown on protests.

Protesters say that the ruling party benefits from the current electoral system and vowed to continue the unrest until their demands for snap polls are met.

Sergei Chemezov, CEO of Russian conglomerate Rostec, told reporters Monday that India made an advance payment of $800 million for Russia’s S-400 anti-aircraft missile systems, a purchase that is a part of a $5 billion arms deal with Russia that comes amid threats of United States sanctions, Al Jazeera reported.

India and Russia established this deal in October 2018 so India could buy long-range surface-to-air missile systems.

Russian President Vladimir Putin said during the BRICS summit in Brazil last week that the S-400 deliveries to India were going “according to plan.”

Russia has been India’s main supplier for military equipment, but New Delhi has also reached deals with the United States and Israel for weapons in recent years.

Despite warnings of sanctions, Indian defense analyst Ajai Shukla argues that the US will waiver on sanctions and won’t negatively affect Indian-US relations, as it has with Turkey.

The US has threatened Turkey with sanctions over the purchase of Russia’s S-400 missile system.

“The United States has more or less signaled that it’s ok with this project and it is not likely to invoke sanctions against India as a result of this,” he said.

A Means To An End

China’s Foreign Ministry defended the government’s crackdown in the western region of Xinjiang after a New York Times report revealed 403 pages of leaked internal documents detailing the mass detention of Muslims in re-education camps and prisons.

“It is precisely because of a series of preventive counterterrorism and de-extremism measures taken in a timely manner that Xinjiang…has not had a violent terrorist incident for three years,” ministry spokesman Geng Shuang told reporters on Monday, according to the New York Times.

Shuang criticized the report for dismissing Chinese efforts against extremism, but did not dispute the authenticity of the leaked documents.

The documents were provided by an anonymous member of China’s political establishment and highlight the direct involvement of senior officials in planning and organizing the crackdown against Uighurs and other Turkic Muslims.

The international community has criticized the detentions and accused Beijing of detaining one million people in detention camps.

China’s government refused the accusations but has since argued that its operations in the region are part of curbing a national security threat.

Health centers around the world promote the idea of “living well” through meditation, therapy and other positive emotion-inducing activities.

More than 25,000 South Koreans of different backgrounds – students to retirees – have attended the Hyowon Healing Center’s “living funeral” services since it opened in 2012.

Participants wear shrouds, take funeral portraits, write their will and lie in a closed coffin for about 10 minutes. Fortunately, there’s no burial.

The aim of the program is to help attendees to appreciate life and seek forgiveness and reconciliation with family and friends.

It was an eye-opening experience for several students and graduates who are navigating South Korea’s very competitive job market.

“When I was in the coffin, I wondered what use that is,” said university student Choi Jin-kyu, who plans to start his own business after graduation.

“I want to let people know that they matter, and that someone else would be so sad if they were gone,” he said. “Happiness is in the present.”