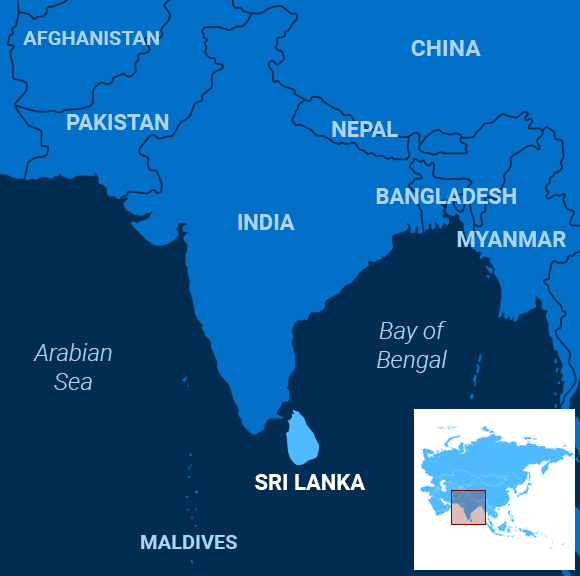 The Politics of Greed

Gotabaya Rajapaksa helped crush a nearly 30-year-long insurgency in Sri Lanka in 2009 when he was defense secretary under his brother, former President Mahinda Rajapaksa.

Now Gotabaya Rajapaksa wants to be president after voters go to the polls in the South Asian island country on Nov. 16.

Leaders in Washington should be concerned, reported the Wall Street Journal.

Under the Rajapaksas, Sri Lanka welcomed China to build infrastructure for its Belt and Road Initiative designed to link Europe and East Asia. The cooperation left Sri Lanka heavily indebted and many of its citizens enraged. The island off the Indian coast gave China control of a major port to help pay its bills.

Current President Maithripala Sirisena – who defeated Mahinda Rajapaksa in 2015 – is unpopular and opted not to seek re-election for a host of reasons detailed in this Al Jazeera story, including intelligence lapses that failed to prevent the Easter bombings carried out by Islamic militants that killed 250 people.

For better or for worse, Sirisena had a more Western outlook, letting the US Navy use the island as a hub. American officials have been hoping to send more economic aid to Sri Lanka and also expand their military presence there to counter Chinese expansion in the region. Candidate Gotabaya Rajapaksa is less likely to welcome that cooperation.

Rajapaksa’s rival in the election is Sajith Premadasa, a lawmaker who is seeking to tap into discontent over the authoritarian streak in Sri Lanka’s politics.

The country needed a “cleanup,” Premadasa told Nikkei Asian Review, but that didn’t mean people needed to sacrifice their cherished democracy and individual freedoms. “It is time to go beyond party politics, the politics of greed,” he said.

Don’t think Premadasa is an outsider, though. He’s the son of ex-President Ranasinghe Premadasa, who was assassinated by a Tamil Tiger suicide bomber in 1993. But Sajith Premadasa’s pedigree and ideals might not be enough for him to defeat Rajapaksa, who promises voters quick economic fixes and a strong hand against terror.

“Gotabaya offers a hard authoritarian solution to popular frustrations in the daily struggle to survive,” labor activist Devaka Gunawardena wrote in the Wire, an Indian news outlet. “Sajith, on the other hand, offers a defense of weak democracy.”

But the past is hard to escape when it is not yet the past.

The Dutch-led Joint Investigation Team (JIT) released the intercepts in a bid to find new witnesses for the 2014 incident which killed all 298 passengers.

The JIT had already concluded that the aircraft was downed by a Russian-made anti-aircraft missile system known as Buk, but Russia rejected the conclusion.

In June, Dutch prosecutors argued there was evidence of a direct line of command between Russian officials and separatists.

They said three Russians and one Ukrainian would be brought to trial in the Netherlands for their alleged involvement in the incident.

The Russian Foreign Ministry called the new recordings “fake” and “unconfirmed,” adding that Dutch prosecutors were fabricating evidence to fit a predetermined verdict.

Worried about Chinese influence, the Australian government on Thursday implemented stricter guidelines for universities to combat foreign interference in academia, the BBC reported.

The new measures will order universities to identify their research partners and financial donors, making it tougher for institutions to cooperate with foreign countries on research. The government also wants universities to strengthen their cybersecurity systems and protect sensitive research, and share cyber-intelligence with national security agencies.

“The foreign interference threat is at unprecedented levels,” said Education Minister Dan Tehan. “It will evolve so we’ve got to make sure our approach evolves with it.”

The new code comes amid concerns of China’s influence on Australian campuses: A series of computer hacks and controversial donations linked to Beijing have caused tension between the two nations.

There are concerns that China’s influence has forced staff and students to refrain from discussing sensitive political topics, such as the pro-democracy protests in Hong Kong.

China, however, has denied that it has attempted to influence campuses.

The International Criminal Court (ICC) approved a request from prosecutors to investigate crimes against humanity committed against the Rohingya by Myanmar’s military, Reuters reported.

“There exists a reasonable basis to believe widespread and/or systematic acts of violence may have been committed that could qualify as the crimes against humanity of deportation across the Myanmar-Bangladesh border,” the court said.

More than 730,000 Rohingya Muslims fled to neighboring Bangladesh to escape a 2017 crackdown by Myanmar’s military, which UN investigators say was ordered with “genocidal intent.”

The ICC is allowing prosecutors to examine acts that could qualify as widespread or systematic crimes against the minority, including deportation and religious and/or ethnic persecution.

Chief prosecutor Fatou Bensouda made the request in July to investigate suspected crimes in Bangladesh and in Myanmar’s Rakhine state.

Although Myanmar is not part of the ICC, the court has jurisdiction to investigate alleged crimes that partially took place across the border in Bangladesh, which ratified the court’s statute in 2010.

The predominately Buddhist Myanmar has denied accusations of genocide.

Of Marches and Progress

The discovery of a new species of ancient primates may change the timeline of human evolution.

The team, led by Madelaine Böhme from the University of Tübingen, found the remains of an unknown primate named Danuvius in southern Germany.

Researchers reconstructed how the ancient ape moved in its environment and noted that Danuvius displayed human-like characteristics almost 12 million years ago.

“It was astonishing for us to realize how similar certain bones are [in its body] to humans, as opposed to great apes,” said Böhme.

The ancient primate’s spine had an S-shaped curve, which held its body upright while it walked on two feet, but it also could climb trees.

Originally, scientists believed that the upright posture humans have today began six million years ago in Africa, but the study sheds more light on humanity’s origins.

“The finds in southern Germany are a milestone in paleoanthropology because they raise fundamental questions about our previous understanding of the evolution of the great apes and humans,” Böhme said.

Maybe it’s time for scientists to properly revamp the famous “March of Progress” illustration that tried to show millions of years of human evolution.