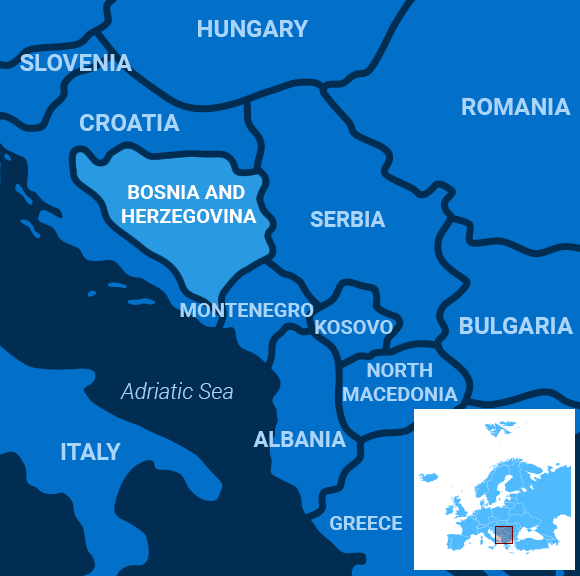 Bosnia and Herzegovina has three presidents but no government.

As Agence France-Presse explained, the three leaders of the Muslim Bosniaks, ethnic Croats and ethnic Serbs serve simultaneously as heads of state in the former Yugoslav republic. But since they were elected a year ago, squabbles have prevented them from appointing a prime minister.

The gridlock suits the president of the ethnic Serbs, Milorad Dodik, just fine.

“The fact that we have not had a Council of Ministers for a year is evidence that we do not need Bosnia,” he said. “It’s obvious, we can do without it.”

But while Dodik’s so-called “Republika Srpska” might be happy to secede from Bosnia – and maybe merge with its neighbor, the Republic of Serbia – others want to keep Bosnia intact.

As one would expect, the three presidents disagree on loads of issues. But, as Balkan Insight reported, the big issue is that Dodik – reflecting the Serbians’ closeness with Russia – is arguably holding up Bosnia’s multi-step application to join NATO. Co-presidents Zeljko Komsic of the ethnic Croats and Sefik Dzaferovic of the Bosniaks want to proceed with the application.

The impasse has highlighted the need for changes to the system of government created by the US-brokered Dayton Accords peace agreement almost 25 years ago, according to World Politics Review. That system might have ended a conflict that killed more than 100,000 people as Yugoslavia disintegrated, but it also arguably froze ethnic tensions in place.

In an opinion piece in Balkan Insight, local journalist Srecko Latal agreed. “Bosnian politics remains imprisoned by worn-out narratives that cannot be realized – and only keep the country in a state of permanent confrontation,” he wrote.

Dodik wants to break up Bosnia. But Latal argued that many Bosniaks would take up arms to prevent the dissolution of their country. Splitting up Bosnia could also lead to Croats and Muslim Bosniaks fighting over the land that’s left, he added.

Other issues are at play, of course. War memories linger. A court recently sentenced a former Bosnian Serb soldier to 20 years in prison for burning 57 Bosniaks alive during the war in the 1990s.

The Balkan country is also trying to house 40,000 refugees who fled the Middle East and elsewhere in recent years, Reuters reported. “I saw houses in Slovenia and Croatia for animals that are better than this camp,” said one Afghan refugee, Mohammed Idriz Neeaziv, of a tent settlement that lacks running water and electricity. “This is not a camp. This is not for humans.”

Bosnia-Herzegovina needs to get over the tragedies of its past so it can deal with those of the present.

A Seoul court began hearings in a civil suit against Japan Wednesday over allegations that South Korean women were forced to work in Japanese military brothels during World War II, the Associated Press reported.

A group of 20 former sex slaves and relatives of victims filed the suit in 2016 demanding compensation of $171,000 per victim, but it was delayed after the Japanese government refused to be served the complaint.

Japan argues that all compensation matters were resolved in a 1965 treaty that normalized relations between the two countries, and refuses to participate in the current case, according to court officials.

The long-awaited case is also the latest spat between Seoul and Tokyo over their wartime history.

The dispute further escalated into a trade war that saw both countries downgrade each other’s trade status, and recently South Korea threatened to end a 2016 intelligence-sharing pact with Japan.

Deciding the Right To Die

New Zealand lawmakers passed a bill Wednesday that would allow euthanasia in certain cases, with the passage of the measure to be determined by a referendum next year, making New Zealand the first country in the world to put the issue to a binding public vote, the Guardian reported.

The law would allow only terminally ill people with less than six months to live to choose assisted suicide if approved by two doctors.

Also, patients wishing to die can be denied permission under the bill for reasons of age, disability, or mental illness. No one is allowed to give consent in advance. And it cannot be suggested to patients by doctors.

Recent polls showed that 72 percent of New Zealanders support a form of assisted suicide, even as opposition has been very vocal.

Even so, two prior bills allowing assisted suicide failed to pass parliament.

The European Court of Justice (ECJ) ruled earlier this week that all food products produced in Israeli settlements in occupied Palestinian territory must be marked with special labels stating their exact origin so that customers can make “informed choices,” the Telegraph reported.

The case began after an Israeli winery based in a settlement near Jerusalem contested France’s application of a previous ECJ ruling: The prior decision backed origin-identifying tags but didn’t make them legally binding.

The EU has long wanted products made in the settlements, which are on territory claimed by the Palestinians, to be easily identifiable, not just labeled, “Made in Israel.”

The court’s decision was criticized by the Israeli foreign ministry and the US Department of State Wednesday, calling it a decision with “anti-Israel bias,” Israel’s Haaretz reported.

But the court rejected notions that the ruling is equivalent to a boycott of Israeli products or sanctions against Israel.

Living in a cabin in the woods might not sound as hygienic as living in an apartment in the city to some.

However, a recent study pointed out that urban living involves more fungi and bacteria around the house than more rustic abodes, Discover Magazine reported.

A team of researchers studied how fungal and bacterial communities varied between South American cities and rural areas.

The team took samples from residents, pets and home surfaces, as well as surveyed participants about their personal and household hygiene.

They concluded that despite the residents’ best efforts, urban locations hosted more fungi and they came from a wider variety of species.

Scientists argued that the organisms built immunity to chemicals meant to kill them and that the conditions in urban homes were more suitable for them: Warmer houses, less natural light and more carbon dioxide helped the fungi thrive.

Apart from showing how dirty city life can be, the study might help explain why urban residents have higher rates of certain health conditions such as allergies, asthma and obesity.

The authors noted that antibacterial products also kill useful bacteria that are helpful to humans, such as good gut bacteria.

“We are living enclosed in houses with decreased bacterial diversity from the environment, and increasing the diversity of chemicals…,” co-author Maria Gloria Dominguez-Bello told NPR.