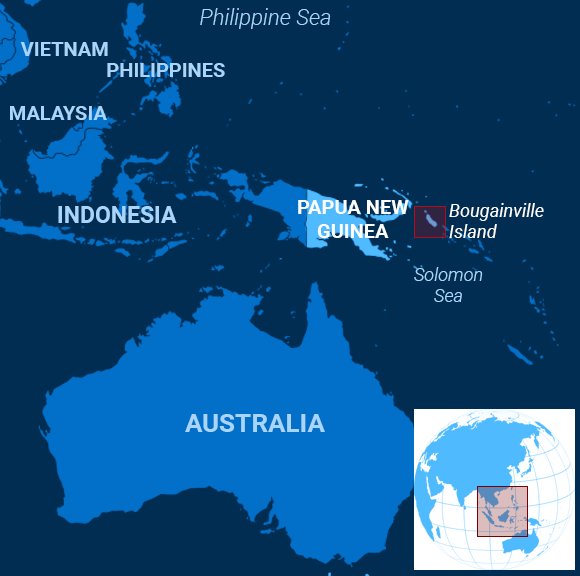 Where Bombs and Bullets Could Not Go

The civil war between Papua New Guinea’s central government and the rebels of Bougainville claimed as many as 20,000 lives between 1989 and 1998.

Stemming from disputes over how to share copper revenues, the conflict was the most deadly in Oceania since World War II, noted Reuters.

Now, between Nov. 23 and Dec. 7, voters in Bougainville will go to the polls to decide a question that bombs and bullets could not settle: Whether the autonomous island region should or should not gain independence from Papua New Guinea.

As Radio New Zealand explained, Bougainville residents have two options in the coming referendum. They can choose greater autonomy from leaders in the country’s capital of Port Moresby or they can opt for independence and apply to become the newest member of the United Nations.

Record numbers are expected to turn out for the vote.

“We want this to be a joyous occasion,” the region’s chief referendum officer, Mauricio Claudio, said in a press conference covered by Reuters. “The people of Bougainville have waited for this moment for decades.”

Around 75 percent of voters are expected to choose independence. The outcome will not be binding – Papua New Guinea’s parliament will have the final say.

But, unfortunately, Papua New Guinea is woefully unprepared for Bougainville to split away, argued research fellow Thiago Cintra Oppermann in a blog post at the East Asia Forum at the Australian National University. Especially concerning is how independence for Bougainville might lead other regions of the country to seek to break ties with the central government.

“Gross incompetence, the absence of any sort of serious development project for the country and rampant corruption are what stimulate the discontent seen in many provinces,” wrote Oppermann.

The Strategist, a publication of the Australian Strategic Policy Institute, was more hopeful, noting that the two sides will need to negotiate their separation in the event of an independence vote. Establishing a judicial system, foreign policy apparatus and other public agencies will take time that both sides currently have.

The fighting of the past suggests that security risks could spin out of control, the Guardian warned. Both sides are taking steps to avoid a renewal of bloodshed, though.

Neighboring Australia could play a key role as mediator and guarantor of peace, too, the Lowy Institute think tank wrote.

In the run-up to the referendum, local officials held a ceremony where veterans of the central government’s forces met and embraced rebels who were their former enemies. “They stood together as Melanesian brothers, shed tears and asked their Bougainville veteran counterparts for forgiveness, ” wrote the Post-Courier, a local newspaper.

Discontent, rage and violence being replaced by forgiveness, understanding and peace. Imagine that.

Lawmakers from the Democratic Party of Moldova (PDM) and the pro-Russian Socialist Party (PSRM) voted against Prime Minister Maia Sandu’s government over a proposed reform of the process of appointing the country’s top prosecutor.

Moldovan President and PSRM leader Igor Dodon filed the no-confidence motion last week and has summoned all parliamentary groups for consultations on Wednesday.

Sandu’s pro-European ACUM alliance formed an uneasy coalition with the PRSM during the summer, but relations between the coalition deteriorated after a PSRM candidate was elected as mayor of Chisinau, the nation’s capital, on Nov. 4.

European Union officials have praised Sandu’s government for implementing key reforms to reinforce democracy and the rule of law but now say the government’s collapse is “worrying.”

Moldova has struggled to implement reforms urged by the West after the disappearance of more than $1 billion from state-owned banks five years ago, which in part led to the collapse of the economy and brought down the government.

Zimbabweans formed lines outside banks on Tuesday in hopes of getting their hands on the country’s first Zimbabwe dollar notes issued since 2009.

The country’s central bank hopes the new notes will ease the severe cash shortages while playing down fears that the new dollars will worsen the inflation rate, the BBC reported.

The currency was previously scrapped a decade ago due to hyperinflation, forcing Zimbabweans to rely on US dollars, South African rands, as well as other foreign currencies.

The government had previously attempted to counter the cash shortage by issuing bond notes and coins. In February, it created a new electronic currency called the Real Time Gross Settlement (RTGS) dollar, but inflation continued to soar.

In June, Reserve Bank of Zimbabwe banned US dollars and other foreign currencies but they flourished on the black market, while many — especially businesses — shunned the Zimbabwe dollars.

Meanwhile, the central bank has said the two- and five-Zimbabwe dollar notes will not increase the overall money supply even as many remain convinced that the cash injection will stoke inflation.

Zimbabwe’s current inflation rate stands at around 300 percent, according to the International Monetary Fund.

Turkish authorities performed autopsies and other forensic procedures Tuesday to determine the cause of death of James Le Mesurier, a former British officer who helped found the White Helmets volunteer aid organization in Syria, the Associated Press reported.

Le Mesurier, 48, was found dead early Monday near his apartment in Istanbul. Turkish police believe he fell to his death from his apartment’s balcony but that remains unconfirmed as police continue to collect security camera recordings near the scene.

Syria’s White Helmets, also known as the Syrian Civil Defense, has more than 3,000 volunteers in opposition-held areas and claims to have saved thousands of lives since 2013.

The group has documented alleged war crimes by Syrian and Russian forces, including chemical attacks.

His death comes a week after Russia’s Foreign Ministry accused Le Mesurier of being a former British spy working in the Balkans and the Middle East, an accusation Britain vehemently denies.

This is not the first time the organization has been the target of a disinformation campaign, the Guardian reported.

“Plants are great, but they don’t actually clean indoor air quickly enough to have an effect on the air quality of your home or office environment,” says study co-author Michael Waring.

Waring and his colleague Bryan Cummings reviewed more than a dozen studies and found that potted plants were very slow in cleaning volatile organic compounds from the air, compared to simply opening the window.

They noted that the myth began in 1989 when NASA suggested using plants to cleanse the air of cancer-causing chemicals in space stations.

Previous experiments tested this theory with a degree of success, but they were mostly conducted in sealed chambers and the conditions didn’t reflect those of the real world. Only two of those studies rejected the idea that indoor plants improve air quality, Science Alert reported.

That doesn’t mean that the office bonsai needs to be discarded.

Plants can actually help with productivity, but for fresh air simply open the window — or buy hundreds of plants to fill the house.