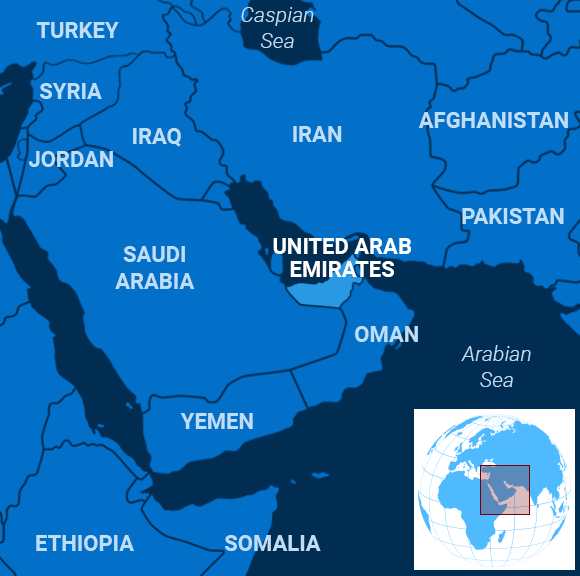 The glittering skylines of Dubai and Abu Dhabi highlight how the United Arab Emirates, or UAE, has been at the vanguard of the new Middle East.

In a region where oil revenues have enabled many Arab countries to remain insular, economically backward and culturally conservative, UAE leaders have embraced a more global perspective in a bid to become an economic hub at the crossroads of Europe, Africa and Asia.

Those same leaders are now discovering that globalization is a double-edged sword.

“UAE banks prepare for rough ride ahead,” read a recent headline in the Financial Times.

Real estate in the federation of seven emirates along the Persian Gulf has long fueled the local economy. Since oil prices plunged in 2014, however, property prices have slid. International trade tensions, geopolitics and other issues aren’t helping. Pressure is mounting on the indebted, state-owned developers who have been building the mega projects that have transformed the UAE into a regional powerhouse.

The local economy is expected to grow 1.6 percent this year and 2.5 percent next year, a modest rise, wrote Gulf News. The UAE-based, English-language newspaper noted that deficit spending as well as economic reforms would fuel the increase.

Those reforms could prove controversial, however.

For example, reflecting the tenets of Islam, drinking alcohol in Dubai is technically illegal except under certain circumstances. “Throwing back shots, sipping a beer or indulging in a Champagne-soaked brunch in this city-state [of Dubai] technically remains illegal without a drinker holding a permit,” wrote Al Jazeera.

The Qatar-based news agency noted that bartenders never ask anyone for a permit, however. Accordingly, alcohol taxes have become a key source of income for Dubai. But those revenues have been dropping, leading local officials to loosen liquor laws to let tourists buy booze in state-operated stores that had been open only to residents with licenses.

The UAE is an ally of the US. But Russian President Vladimir Putin recently visited the country and met with its president, Sheikh Mohammed bin Zayed Al Nahyan, signing agreements on artificial intelligence, telecommunications and sales of Russian military aircraft worth $1.4 billion, wrote Al-Monitor.

Officials in Abu Dhabi are also investing in tech startups across the Middle East and North Africa as part of the UAE’s push to diversify the economy and “help reduce their reliance on oil-dependent industries,” CNBC added. The officials hoped some of those startups will provide dividends to make up for their losses in the future as the price of oil drops further.

The question is how long it will take for their hedge bets to bear fruit.

Cyprus is beginning the process to strip 26 individuals of citizenship they received through the Mediterranean country’s secretive passport-for-investment scheme, the government announced Wednesday, according to Reuters.

The unnamed beneficiaries include Russians, Chinese and even Malaysian fugitive financier Jho Low, who has been painted as the mastermind behind the 1MBD scandal, which saw more than $4.5 billion allegedly misappropriated from the Malaysian investment fund, Bloomberg reported.

The citizenship for passport scheme was introduced in 2013: Through it, successful applicants could buy a passport and travel freely around the European Union in exchange for a $2.2 million investment.

So far, the government has approved up to 4,000 applications, including family members of applicants.

The law was overhauled in February and Wednesday’s decision led the government to admit flaws in the system.

“There were mistakes – it was a mistake not to have criteria, for instance, for high-risk persons,” said Cypriot Interior Minister Constantinos Petrides.

Zimbabwean civil servants took to the streets of the capital on Wednesday to demand higher wages from the government as the country continues to see severe hyperinflation, the New York Times reported.

This is the first time that government workers were allowed to strike against their employer, and it comes amid other strikes including an almost two-month long strike by Zimbabwean doctors.

The nation’s inflation rate is about 300 percent, according to recent figures by the International Monetary Fund.

The government has tried to alleviate discontent among civil servants by providing subsidies to help meet the increased living costs, but protesters complain that their earnings continue to devalue in the face of skyrocketing prices.

President Emmerson Mnangagwa’s government has tried to attract investors, but its poor human rights record has been criticized internationally, including by the United States, which imposed sanctions on several Zimbabwean government officials last month.

Since his reelection last year, Mnangagwa has crushed several anti-government protests and has recently blamed American and European sanctions for Zimbabwe’s collapsing economy.

Russia will deliver a sophisticated anti-aircraft missile system to Serbia even though the Balkan nation risks US sanctions from such purchases, Russian state TASS news agency confirmed Wednesday according to the Associated Press.

The Pantsir-S system – which also has been deployed in Syria – will be delivered to Serbia “in the next few months,” despite warnings last week from the US’ special envoy for the Western Balkans.

The Balkan nation remains a key ally of Russia and has refused to join international sanctions against Russia over the conflict in eastern Ukraine.

Even so, Serbia still aspires to become part of the European Union, but has pledged to stay out of NATO.

Serbian President Aleksandar Vucic said Tuesday that he wants to avoid any US sanctions “or confrontation with America,” but won’t allow Serbia to “be as weak as it was in the 1990s.”

Serbia was bombed by NATO during the 1999 Kosovo war, an experience that has left Serbs with a deep mistrust of the Western military alliance.

The ancient Incas of South America spoke Quechua, an indigenous language that still survives today in the region.

Despite being spoken by about eight million people, a Peruvian doctoral student made history last month by becoming the first person to write and defend a thesis in Quechua, the Guardian Observer reported.

“It has been a long road but it was worth it,” said Roxana Quispe Collantes, who grew up speaking the language and for seven years studied literature focused on poetry written in Quechua.

She presented her thesis, titled “Yawar Para” – meaning blood rain – to scholars of Peru’s San Marcos university entirely in her native language, a first in the institution’s 468-year history.

Her doctoral advisor, Gonzalo Espino, said her presentation was hugely symbolic and it “vindicated” the language and culture of the Andean people.

Peru has been promoting native languages through news broadcasts and translations of books, such as the Bible and the classic Don Quixote.

It has also joined a global effort to register indigenous names as part of the United Nations International Year of Indigenous Languages, which is trying to revive 2,680 at-risk languages around the world.

Quispe Collantes hopes her example will motivate others to write in their native tongue.

“My greatest wish is for Quechua to become a necessity once again,” she said. “Only by speaking it can we revive it.”