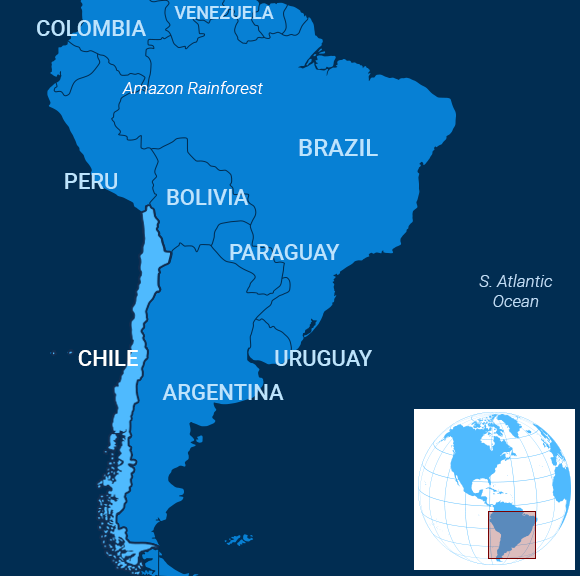 Truckers recently joined protests in Chile, calling for an end to highway tolls.

Hundreds of trucks drove slowly down a highway near Santiago, the capital, where protesters have clashed with riot police for weeks. At least 20 people have died in the civil unrest, wrote the Associated Press.

The protest has continued to escalate over the past few weeks despite the violence and the crackdown. On Friday, about a million people crammed the streets of downtown Santiago, NPR said. The city’s mayor, Karla Rubilar, tweeted that the protesters “represent the dream of a new Chile.”

Demonstrations initially broke out after bus and subway fare hikes. But anger over the police crackdown on the protests morphed into general outrage over economic inequality in one of Latin America’s wealthiest countries, reported Reuters. Many protesters told the news agency they struggle to meet the daily costs of living.

President Sebastian Pinera has adopted a conciliatory tone, apologizing for years of ignoring problems and promising reforms to correct them. “It’s true – problems have not occurred in recent days,” he said, according to CNN. “They have been accumulating for decades.”

On Monday, Pinera fired eight ministers in a major reshuffle of his cabinet in order to calm the situation. “We have all heard and understood the message of Chileans…,” he tweeted Saturday announcing the change. “We’re working to form a new team that represents change.”

As Foreign Policy magazine explained, Pinera proposed a 20 percent increase in state pensions, a minimum wage, a moratorium on a planned increase in electricity prices, and pay cuts and term limits for lawmakers. But as protests continued, it seemed clear that Chileans doubted those plans would address their many complaints about transportation, education and other issues.

Meanwhile, curfews and troops on the streets of Santiago remind many Chileans of General Augusto Pinochet’s 17-year-long dictatorship in the country that ended in 1990, reported National Public Radio. Pinochet’s regime imprisoned, tortured and killed thousands.

“It was like a slap in the face for all of us,” said 54-year-old protester Paz Lagos. “This history is still alive and we haven’t forgotten what happened when the military took over the streets. It was a very hard time – many died. We do not want the same thing here.”

Pinochet was arguably the architect of today’s Chilean free-market economy, which is prosperous relative to its neighbors but nonetheless has produced a wide income gap that has angered and frustrated ordinary citizens, the Nation, a left-wing magazine, wrote.

Similar discontent is driving people to the streets in Ecuador, India, Iraq, Lebanon and elsewhere, Fareed Zakaria wrote in a Washington Post op-ed.

Chile’s economy grew at 6 percent in the 1990s and 4 percent in the 2000s, Zakaria explained. In the past five years, though, growth averaged 2 percent. The International Monetary Fund now estimates Latin America’s growth this year will be 0.2 percent, down from a 1.4 percent estimate six months ago. People are working harder and getting less.

At the same time, elites appear more in control of governments in democracies and closed societies than ever, the Guardian observed.

If people feel they can’t get ahead, they’ll slowly lose confidence in society, law and order.

Argentina’s center-left Peronists celebrated their return to power Monday after a four-year absence, setting off fears that the country could return to its populist ways, the Associated Press reported.

The victory also saw the return of former President Cristina Fernandez – no relation to the president-elect – a politician adored by the poor but feared by big business as vice-president.

There is concern that the Peronists’ victory will scare off investors and bring back Cristina Fernandez’s interventionist policies, which have been blamed for the current economic turmoil.

But analysts doubt that the former president’s policies will be revived as the country is not financially flush enough to freely spend as it did in prior decades.

Meanwhile, the former president, who governed from 2007 to 2015, faces charges of corruption, which she has denied.

Argentina has one of the highest inflation rates in the world, 56 percent annually, while a third of the population lives in poverty, reported the Guardian.

Macri was in negotiations with the International Monetary Fund to get a record $56 billion bailout in exchange for austerity measures. Now, the markets will watch how the new president, a critic of the plan, will handle the plan. Many Argentines blame the IMF for creating the conditions that led to the economic collapse at the beginning of the century, the AP reported.

The center-right CDU has historically refused to work with the far-right Alternative for Germany (AfD) and the socialist party Die Linke, which has roots in the former East German Communist Party, reported the Financial Times.

But the election results in Thuringia Sunday, is leaving little choice for the CDU: The AfD more than doubled its share of the vote to take second place in the state, finishing just behind Die Linke. The CDU scored their worst ever result in their former stronghold.

Thuringia CDU leader, Mike Mohring, initially offered to form a coalition with Die Linke, but later walked back on his comments, following the intervention of national CDU chief – and Merkel’s successor – Annegret Kramp-Karrenbauer.

As a result, forming a coalition government in the state could prove very difficult, observers said. If it becomes impossible, which could likely happen, the state will have to hold new elections.

“After seeing negative growth in the second quarter, the situation continued in the third quarter, meaning our economy has entered technical recession,” the city’s Financial Secretary Paul Chan wrote in a blog post, Reuters said.

Chan called the drop in tourists an “emergency.” The South China Morning Post reported the city is suffering the worst downturn in visitors since the SARS outbreak in 2003.

Hong Kong has long been an international draw for its spectacular cityscape, and its restaurants, shopping and nightlife.

Protests, which began in June, were sparked by a now-quashed bill that would have extradited locals to mainland China for prosecution.

Since then, the demonstrations have sometimes turned violent with protesters setting fire to shops and businesses, while throwing petrol bombs at police, who have responded with tear gas, water cannons and rubber bullets.

Both shopping malls and small family businesses were forced to close for days over the past months, reported Reuters.

Chan noted that it would be “extremely difficult” to achieve the government’s pre-protest forecast of zero to one percent annual economic growth this year.

Since it was built in 1066, the Tower of London has been the final resting place of many Britons deemed traitors to the crown, but it wasn’t just an infamous prison – ordinary people lived and worked there too.

The recent discovery of the complete skeletons of a woman and a girl buried there is now shedding light on what life looked like for ordinary Britons who lived within the military fortress some 500 years ago, ABC News reported.

Archaeologists found the skeletons during excavations at the entrance to the tower’s Chapel of Saint Peter ad Vincula, which dates from 1520. The find came as a result of plans to make the chapel more accessible to the public.

The Historic Royal Palaces charity, which supervises royal landmarks around London, wrote that the bones reveal the harsh conditions of their time.

“Both skeletons show signs of illness and the adult shows signs of chronic back pain,” explained historic buildings curator Alfred Hawkins. “Their growth shows not a comfortable life, but one which is typical of the period in which they lived.”

The Tower is known for housing the United Kingdom’s Crown Jewels as well as being the final resting place of three executed English queens, including two of Henry VIII’s six wives.