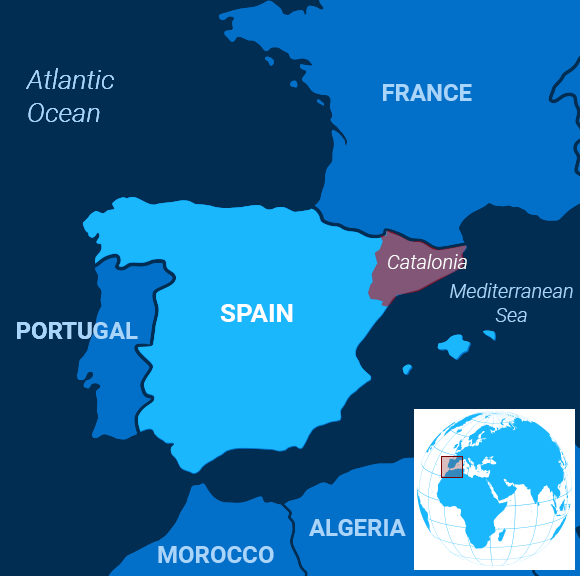 Separatism made Catalonia into a powder keg.

Activists in the region of northeastern Spain have long demanded independence from the central government in Madrid, citing their unique language and culture. In 2017, tensions over the issue came to a boil when Catalonia’s local government held a referendum on secession. An overwhelming majority of voters supported a break. Spanish authorities said the vote was illegal.

On Oct. 14, Spain’s Supreme Court sentenced nine Catalan separatists to terms of nine to 13 years in prison for the crimes of sedition and misuse of public funds in connection with the referendum, reported Jurist, a legal news website.

The decision set off the “worst street violence Spain has seen for decades,” reported the BBC, adding that at least 96 people were injured in clashes between protesters, police and anti-secessionists.

“At least one independence activist was beaten and kicked as he lay on the ground, while radical separatists cornered a far-right demonstrator who had a knife and left him with head injuries after disarming him,” El País, the major Spanish newspaper, wrote of one huge protest in Barcelona, the Catalan capital.

Things could have been much worse. The court opted not to charge the nine separatists with rebellion, a crime that carries a prison term of 25 years, the New York Times explained. The court also noted that the separatists would serve their sentences in Catalan jails that technically would be able to give them parole next year.

Still, many protesters viewed the court decision as an affront to their freedom of expression and determination. “It’s not about who is a separatist and who is not – it’s about human rights,” said Aila, a student demonstrator who withheld her last name, in a Reuters interview.

Former Catalan President Carles Puigdemont, now in exile in Belgium, would also face arrest if he returned home. He recently surrendered to Belgian authorities after Spain renewed an international warrant for his arrest, reported the Guardian. He was released on bail after appearing in a Belgian court.

European officials have been loath to get involved. Spanish leaders haven’t been much better, though. Prime Minister Pedro Sanchez faces an election on Nov. 10 that will be the fourth general election in four years, Bloomberg reported. Sanchez sits atop an unstable government that’s running a fragmented country.

The prime minister doesn’t want to go down in history as the guy who let Spain fall apart. He’s already known, however, as the guy under whom it burned.

Lebanese President Michel Aoun on Thursday made overtures to enraged protesters who had been on the streets for almost a week, saying that a government reshuffle is “possible,” reported Reuters.

It’s the second gesture made to protesters this week in an attempt to calm the situation: On Sunday, Prime Minister Saad Hariri presented a reform package which included 50 percent salary cuts for the president, government ministers and lawmakers.

Anti-government sentiment has been brewing since July when parliament passed an austerity budget to stem the implosion of the economy, the world’s most indebted, reported Al Jazeera.

But protests erupted Oct. 17 with demonstrators accusing politicians of corruption and cronyism after the government proposed new taxes on tobacco, gasoline and on calls made via social media apps like Whatsapp.

On Thursday, Aoun delivered a televised address pledging to fight corruption and introduce legislation that would lift banking secrecy and scrap immunity for presidents, ministers and legislators.

While the protests have meant a shutdown of many services including stores and banks for security reasons, the demonstrations have also at times taken on a carnival-like atmosphere. For example, protesters banded together to sing the international hit, “Baby Shark” to calm a scared toddler. The song quickly became the soundtrack to the demonstrations, while the video of protestors singing it has gone viral.

President Evo Morales won a controversial election by a slim margin, which could fuel further unrest in Bolivia, the latest in a wave of Latin American nations facing violent protests, reported the Guardian.

Morales, running for a 4th term in spite of term limits mandating two, was able to clear the 10 percent margin he needed to avoid a December run-off against his rival, former president Carlos Mesa.

Following the disputed victory, Mesa accused Morales’ government of manipulating the vote and called for peaceful protests to continue indefinitely.

The vote was plagued by controversy after the vote counting of Sunday’s elections was stopped for no apparent reason even though preliminary returns suggested Morales would have to participate in a runoff against Mesa that he could lose, reported the Washington Post.

When it resumed, results started to swing in Morales’ favor, setting off violent protests, with protesters setting fire to election offices in Chuquisaca, Sucre and Tarija.

Morales’ response? Accusing the Bolivian opposition of a coup.

Kathryn Ledebur, director of the Andean Information Network, which analyzes Bolivian politics, told the Washington Post that the decision to suspend the count then suddenly announce results that appear to show Morales winning strains faith in the electoral process.

“There is an uncertainty, and the road from here on out is going to be rocky and complicated for everyone,” she said. “In this situation, all Bolivians lose.”

On the Carving Board

Two days after a ceasefire deal, Turkish-led troops clashed with the Syrian army and Kurdish-led fighters in northeastern Syria Thursday, highlighting how multiple factions are jostling for new positions in the tight northeastern border zone, the Associated Press reported.

Under a new agreement between Russia and Turkey reached earlier this week, Kurdish fighters in the Syrian Democratic Forces (SDF) must withdraw from a 19-mile deep zone along the northeastern border by Tuesday.

The deal offers Turkey a large section in the center of the border even as Thursday’s attacks took place outside the Turkish-controlled zone, suggesting that Turkish troops are trying to get new ground on its edges, the BBC reported.

Meanwhile, Turkish President Recep Tayyip Erdogan has vowed to resume his military offensive if his country is “harassed” by Syrian Kurdish forces, whom he believes are affiliated with Kurdish separatist groups in Turkey.

Earlier this month, US forces withdrew from the area, leaving their Kurdish allies open to attack from Turkey, which began two weeks ago.

Scientists have had a hard time trying to determine the social structure of farming communities that lived in southern Germany more than 4,000 years ago, due to the lack of written chronicles.

Recently, however, a team studied DNA from 104 people buried on farmsteads in one of these early Bronze Age communities, along with artifacts from their graves. Their work allowed researchers to sort out relationships between individuals and piece together a picture of a surprisingly complex society characterized by inequality, slavery and immigration, Science Magazine reported.

In their study, researchers found that one-third of the women from high-ranking families were foreigners from far-away communities. Scientists also noted a lack of adult daughters, suggesting that the families would have married their daughters away to other distant communities.

That was not the case with boys, who would set down roots on their parents’ land, with brothers inheriting equal amounts of the family’s wealth.

Moreover, high-status families had unrelated people, probably servants or slaves, living in their households. This was not seen in humbler households in the community.

Researchers believe there was a lot of inequality in the society, which shatters the previous notion that these were modest farmsteads.

Scientists hope that this thorough research method can be applied to other archaeological sites in order to get a better picture of how societies without written chronicles functioned, so we can learn more about those who came before us.