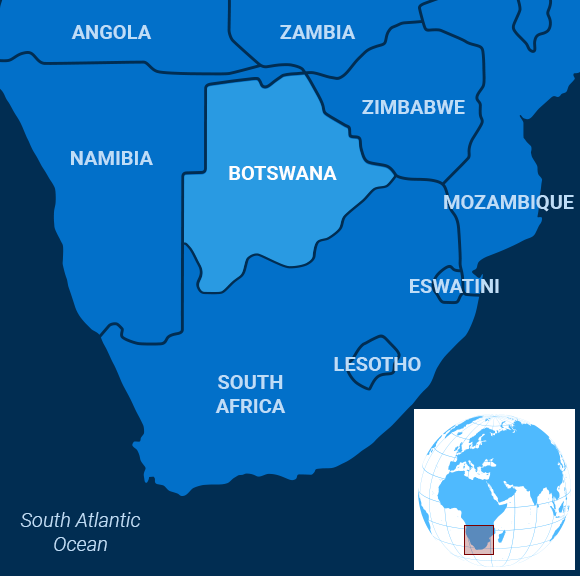 Botswana has long been viewed as one of the most stable democracies in Africa.

That view is now being put to the test.

For the first time since the southern African country gained independence 53 years ago, the Botswana Democratic Party could lose power when voters go to the polls to elect a new parliament on Oct. 23, wrote the Institute for Security Studies, a think tank.

Unlike his dad, the younger Khama was a divider, not a uniter, when he held office from 2008 to 2018. He undercut human rights, including curbing freedom of the press and suppressing political dissent.

“Khama was a strong-headed, manipulative and divisive character who threw tantrums if he did not get his way. Ian is nothing like his father, he is a disappointment,” former Botswanan President Festus Mogae was quoted as saying in an opinion piece in the South Africa-based Independent Online.

Ian Khama recently left the Botswana Democratic Party to join a coalition of opposition parties, citing disagreements with current President Mokgweetsi Masisi, whom he claimed has damaged his legacy. He’s now campaigning against his former allies, including his brother Tshekedi, who serves as minister of youth and sports in Masisi’s cabinet, noted City Press, a South African newspaper.

Opposition parties are hoping to gain from the split in the Botswana Democratic Party as Khama draws votes from his stronghold in the center of the country.

Opposition candidates arguably have the wind at their backs, too. In 2014, opposition parties collectively won the popular vote, a historic feat. That success didn’t translate into power, however, because they still failed to win a majority of seats in parliament.

They might be disappointed again. Polls cited by Chinese news agency Xinhua found that the ruling party is still expected to win handily.

Masisi has taken extraordinary actions to sway the election: He cut interest rates; he moved Election Day from a Saturday to a Wednesday, then made Wednesday, Thursday and Friday paid days off, potentially discouraging voting among undecideds; and he extended the hunting season, a fillip for Botswanans who live off the land.

The fact that Masisi has to make those moves shows that he’s nervous. He might not know it, but that’s usually a sign of a healthy democracy.

From Moscow With Love

President Vladimir Putin opened the first ever Russia-Africa summit Wednesday with an expected attendance of almost 50 countries, an event designed to win back Russian influence lost on the continent after the 1991 collapse of the Soviet Union, Reuters reported.

Setting the tone, Putin warned Africans of rising competition over the continent, and how other countries would exploit Africa’s rich resources.

“They are using such methods to try to return lost influence and dominance in their former colonies in a new guise and rushing to pump out maximum profits and to exploit the continent,” he said, before the conference opened. By contrast, Russia was ready to offer help without “political or other conditions” and to embrace the principle of African solutions for African problems.

Still, Russia is “late to the party,” went one recent analysis by the Carnegie Endowment for International Peace.

For example, Russian trade with sub-Saharan Africa rose to low $4.8 billion last year, even as it quadrupled from $1.8 billion in 2010, Quartz reported. Russia still ranks below the continent’s top five largest trade partners – the European Union, China, India, the United States and the United Arab Emirates.

At the opening of the summit, Putin called for trade with African countries to double over the next four to five years and said Moscow had written off African debts of more than $20 billion.

The number of Venezuelans fleeing starvation and spiking crime – in the single largest economic collapse outside of war in almost half a century – is nearing five million, alarming officials who say the refugee influx is straining neighbors’ resources to a breaking point, Reuters reported.

“This is the most severe and fastest-growing refugee migrant crisis in Latin American history, at least recent history,” said Walter Stevens, EU ambassador to the UN in Geneva. “There are estimates also that it could further increase if the situation does not change…”

Formerly wealthy, Venezuela saw a socioeconomic and political crisis begin during President Hugo Chávez’s leadership, one that has escalated under his successor, Nicolás Maduro. The economy collapsed into hyperinflation and mass unemployment, while people struggle with shortages of food and medicines, starvation, disease and crime.

Almost a sixth of the country’s population has fled.

Meanwhile, Venezuela’s neighbors are buckling under the strain of coping with hundreds of thousands of refugees, particularly Colombia and Peru, the top two destinations, followed by Chile and Ecuador, which are currently experiencing their own political and socio-economic turmoil.

Prime Minister Boris Johnson will push for new parliamentary elections if the EU agrees to an extension of Brexit, a delay he doesn’t really want, the BBC reported.

The announcement came after the prime minister, who took office in July with a vow to leave the bloc by the Oct. 31 deadline, saw his withdrawal bill defeated Tuesday in parliament.

Johnson said new elections were contingent on a Brexit extension until Jan. 31, 2020 – he was forced by law to apply for the delay Saturday even as he hoped to rush his proposal through parliament this week, the Guardian reported.

Johnson has since “paused” the withdrawal bill, which received approval in a second reading Tuesday before being defeated by lawmakers concerned over the speed of the implementation.

Despite his announcement, British law says that the prime minister needs a two-thirds majority from parliament to push forward general elections – which the opposition has rejected twice in the past.

The opposition Labour Party has not commented on supporting an early poll.

Meanwhile, European leaders are torn between their desire to end the Brexit saga and yet unwilling to be the cause of the UK leaving the bloc without a deal, the Wall Street Journal reported.

Still, analysts predict they will agree to the extension, even if they want to move on to the second phase of the departure – the trade deal.

Wedding celebrations are a serious business in Uzbekistan.

The central Asian country has a reputation for lavish festivities involving singers, dancers and rented cars.

It doesn’t come cheap: Wedding spending can top $20,000, a stratospheric amount in a country where monthly incomes rarely exceed $300.

Last year, President Shavkat Mirziyoyev criticized the “shameless spending” on celebrations and urged families to use their money to help others in need. His words fell on deaf ears.

As a result, the government is introducing a law to rein in what it sees as excessive spending on nuptials in a bid to ease pressure on families to host expensive festivities that push them into debt, the BBC reported.

The new law, which also applies to birthday parties and funerals, will require event planners to scale back and notify local authorities in advance.

Many government officials support the move, with one senator demanding an audit of people’s incomes to see if they are spending more than they earn.

The public, however, wasn’t pleased and questioned the law’s effectiveness, while wedding singers have banded together to defend their reputation. Some posted videos and graphics on social media detailing how their fees help support the families of numerous people they employ.

Click here to see how a double wedding plays out.