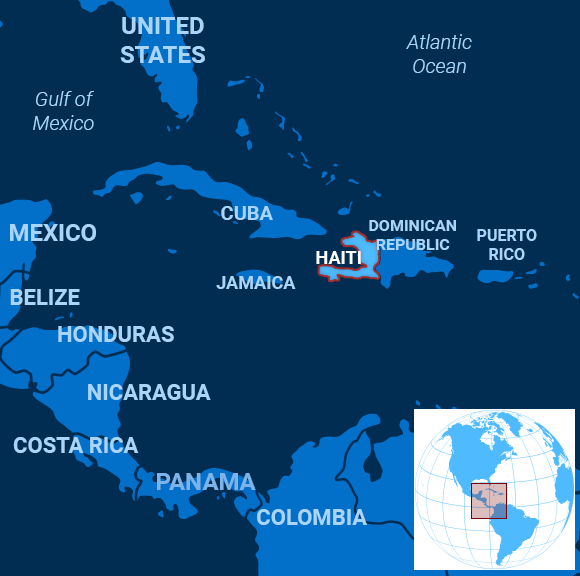 Protests in Haiti have taken a heavy toll on the impoverished Caribbean nation in recent weeks.

At least 18 people have died. Businesses have closed. Humanitarian aid workers who provide a key role in Haiti’s economy and civil society can’t do their jobs. “Many schools have been closed for the past two weeks, leaving an estimated 2 million children and young people without any access to education,” Stephane Dujarric, a spokesman for the United Nations secretary-general, told CNN.

The protesters want President Jovenel Moise to resign. His constituents are “fed up with poverty, scarcity and corruption,” the Washington Post explained. International aid has been flowing into the country since 2010, when an earthquake devastated Haiti. People have seen few of the benefits of that largesse, however.

Inflation is high. Fuel shortages are common. Drinking water is rarely safe. Haiti remains the poorest country in the Western Hemisphere. Most Haitians subsist on less than $2.40 a month.

Moise’s acquiescence to anti-corruption campaigners last year led to an investigation that further exacerbated frustration on the street. The probe found that officials had absconded with $2 billion in aid funding.

“I think it’s time that everyone understands that things cannot continue like this anymore,” protester Anthony Bennett, a former presidential candidate, told the Associated Press. “Everybody is just hoping to get a visa to run away.”

Moise was implicated in the investigation. Yet he refuses to leave office and, with three more years left on his term, has even cast himself as a reformer. “It would be irresponsible on my part for me to stand here today, to sign and submit a letter of resignation and say ‘I am leaving’ and leave the country like this and the system regenerates itself,” said Moise during a press conference covered by the Miami Herald.

Haitians are right to criticize their corrupt leaders. But Americans bear some of the blame for the country’s plight, too. US military interventions in Haiti over the years haven’t helped, noted Time.

American humanitarian aid hasn’t always been productive, either, added the Guardian. Under the direction of former President Bill Clinton, who oversaw the international post-earthquake recovery effort, the US spent $300 million on a project to build a new port, industrial park and power plant on the nation’s northern coast, for example. Haitians had little input on the project. The port was never built. The office park, poorly constructed and far away from population centers, eventually flopped, producing 1,500 of the 65,000 jobs that Clinton promised.

Now, given the protests and plight, what’s next? No one is sure, but most agree: Something has to change.

Ethiopian Prime Minister Abiy Ahmed and Egyptian President Abdel-Fattah el-Sisi will meet Wednesday over a disputed dam project even as Ahmed told lawmakers a day earlier that he’s ready to go to war over it, the Associated Press reported.

“If there is a need to go to war, we could get millions readied,” said Ahmed, who won the Nobel Peace Prize earlier this month for reforms he has implemented in Ethiopia and making peace with Eritrea. “If some could fire a missile, others could use bombs. But that’s not in the best interest of all of us.”

Talks collapsed earlier this month over its construction, with Egyptian officials fearing that the Nile dam will reduce its share of the river and leave the country unable to protect its main freshwater source.

Abiy said that Ethiopia is determined to finish the $5 billion Grand Ethiopian Renaissance Dam project, the largest in Africa. It will, when completed, provide electricity to 100 million Ethiopians.

The dam is nearly 70 percent complete.

Meanwhile, Egyptian media cast the issue as a national security threat that could warrant military action, even as Egypt’s government said it was “shocked” by the Ethiopian leader’s statements.

Prime Minister Benjamin Netanyahu’s admission Monday that he had failed to form a majority government hands the task to his chief rival, political novice Benny Gantz, while throwing the country into a period of political uncertainty, the Times of Israel reported.

It was the second time this year that Netanyahu failed to form a coalition following elections in April and September where his party failed to secure a 61-seat parliamentary majority. Now, for the first time in a decade, someone other than the embattled leader of conservative Likud will have the chance to do so.

Netanyahu said he had worked “tirelessly” to create a unity government with Gantz, who leads the centrist Blue and White party. But Gantz refused to allow Netanyahu’s allies – hardline and religious parties – into the coalition.

Gantz had also said he didn’t want to be in government with someone possibly facing trial: The attorney general will decide over the next few weeks whether Netanyahu is to be indicted on corruption charges that include bribery and fraud.

Meanwhile, Gantz is a dozen seats short of a majority, and some predict he will also fail to form a coalition, which might force the country to hold new elections.

A Sort of Homecoming

Spain is relocating the remains of fascist dictator General Francisco Franco Thursday from a giant mausoleum he built on the outskirts of Madrid to a nearby cemetery, a move that has long divided Spanish public opinion, CNN reported.

Franco was buried in the Valley of the Fallen, a monument that was partially built by political prisoners and is the site of a mass grave of Spanish Civil War victims.

The site has become a tourist attraction but also a hotspot for far-right sympathizers, who rally at the mausoleum on the anniversary of the dictator’s death on Nov. 20.

The government’s plan is to turn the monument into a memorial for the 500,000 people that were killed during the 1936-1939 civil war Franco started. Meanwhile, Franco will be buried next to his wife.

Franco’s descendants and far-right supporters protested the move and appealed to the courts. However, the exhumation was approved by the Supreme Court last month and was one of the key policy pledges of acting Prime Minister Pedro Sanchez, who’s running for reelection in November.

Meanwhile, the relocation of Franco’s remains has divided the Spanish public for years with a recent poll showing 43 percent in favor and nearly 33 percent against the move, Reuters reported.

A Whale of a Mouthful

The fins of humpback whales are not just for swimming, according to a recent study.

For the first time, marine biologists recorded whales off the coast of Alaska using their large pectoral fins to herd shoals of salmon into their mouths, the Guardian reported.

“The first time I saw this behavior it was from boat level and it looked chaotic,” said lead author Madison Kosma. “But when I got a bird’s eye view with a drone, I was ecstatic. It wasn’t chaotic, it was actually graceful, intentional and calculated.”

Humpbacks’ pectoral fins can reach up to 16 feet and are primarily used for maneuvering and sudden bursts of acceleration in water, but their role in foraging for fish had not been seen before.

Kosma and her team noted that the marine mammals would entrap young salmon into meal-sized shoals using bubbles released from their blowholes, then using their flippers to gobble up the fish.

They said that the method makes feeding more efficient for the whales, allowing them to consume more fish.

“We believe that the whales are getting more bang for their buck by using pectoral herding techniques,” Kosma said.

She added that scientists still need to confirm if whales in other parts of the world exhibit this behavior.

Click here to see humpbacks grabbing a mouthful of fish.