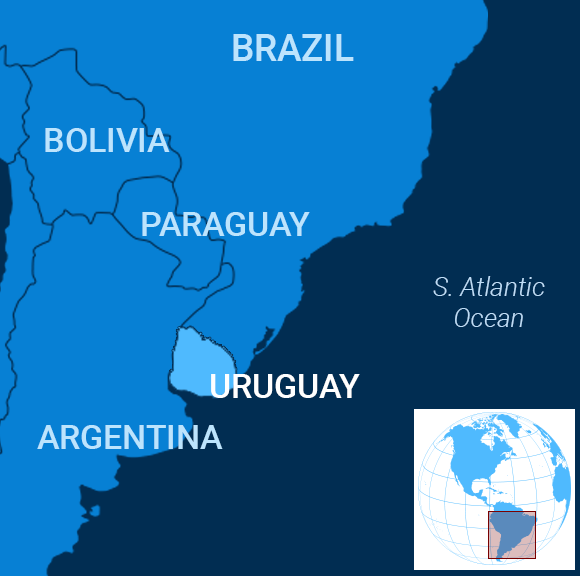 More than the presidency is at stake in Uruguay on Oct. 27.

The mayor of the capital city of Montevideo, Martinez, 62, is leading in the polls, according to the Americas Society/Council of the Americas. He is the head of the Broad Front, the party that has controlled the South American country for 15 years.

The Broad Front came to power on a wave of enthusiasm for leftist policies but has avoided the “autocracy or unbridled ambition” of socialist regimes in Venezuela and elsewhere, two Latin American studies scholars argued in the Conversation.

Martinez can’t be too careful, however. Support for the Broad Front, is still significant but has waned in recent years. His chief rival, National Party leader Lacalle Pou, 46, has created plenty of buzz as a popular, young newcomer running a tough campaign amid widespread disappointment with the status quo, Americas Quarterly explained.

Critics accuse the Broad Front of pursuing some progressive policies but failing to deliver on deeper changes that have stalled the Uruguayan economy and allowed society to descend into violence, political theorist Mabel Thwaites Rey said in an interview with the North American Congress on Latin America, a respected journalism group with a left-wing bent.

Meanwhile, Reuters described the country’s economy as “sluggish.” Mainstream leaders can’t seem to solve the problem, though. And, as the Buenos Aires Times wrote, neighboring Argentina’s economic woes are also playing a big role in fears of a downturn.

In the Oct. 27 election, voters will also consider a proposal that would grant police broad powers to raid suspects’ houses, create a national militia and impose harsh punishments on convicted criminals, like life without parole and 30 years of solitary confinement, for serious crimes.

The official press agency of Cuba, Prensa Latina, covered a march against the law. Demonstrators carried placards reading “Living without fear” to protest what they worried would become an Orwellian police state if the ballot measure passed. Similarly, World Politics Review asked if success for the referendum question would indicate that Uruguay was embracing populist, right-wing policies like Brazil.

If people opt for police raids, they just might get them.

In a surprising about-face, abortion was legalized at midnight Monday in Northern Ireland, throwing out one of the world’s most restrictive abortion laws, reported the New York Times.

The change – and also one legalizing same-sex marriage – was imposed by the UK parliament, which passed legislation in July relating to the general governance of the territory, reported the BBC.

The changes, which were fiercely opposed by anti-abortion and church groups, came amid a power vacuum created by the collapse of the region’s governing assembly nearly three years ago, the New York Times reported.

Even so, lawmakers reconvened Monday at the Northern Ireland Assembly in an unsuccessful attempt to stop the law from coming into effect. The High Court in Belfast had also previously dismissed a legal challenge.

Before the change, abortion was prohibited in almost every case – including rape, incest and fetal abnormalities – except for in cases where the mother’s life was endangered. And violating the ban could mean life in prison.

Under the new abortion law, all existing legal action taken against women who have sought abortions will be dropped. Full services will be available in Northern Ireland from Mar. 31.

Santiago was paralyzed Monday as protesters hit the streets for the fourth consecutive day, shutting stores, banks, and schools.

The unrest sparked last week by a now suspended metro fare hike has turned into a movement against rising inequality in the Andean nation, and killed at least 11, CNN reported.

The chaos forced conservative President Sebastian Pinera to send soldiers and tanks into the city over the weekend for the first time since 1990, when Chile brought back democracy after the dictatorship of Augusto Pinochet. On Monday, more than 10,500 soldiers and police were deployed.

Pinera condemned the riots saying that the country is “at war against a powerful enemy.”

The protests have exposed the divisions in the nation with many Chileans demanding reforms over the rising cost of public services and the decline in living standards, according to the Washington Post.

Meanwhile, workers at Chile’s Escondida copper mine – the world’s largest – said that they would hold a strike Tuesday in solidarity with protesters, Reuters reported.

Specifically, critics point to tough defamation and national security laws passed over the past two decades, which have limited investigations, and have made the country much worse at protecting whistleblowers than comparable democracies.

Police raids on the Australian Broadcasting Corporation in June and the home of a News Corp Australia journalist sparked outrage, with media organizations saying the raids were the result of articles which had relied on whistleblowers.

Since new counter-espionage legislation was introduced last year, news organizations have lobbied for journalists and whistleblowers to be given exemptions in order to report sensitive information.

This was part of a list of seven demands presented to the government Monday which also call for reforms to restrictive freedom of information and defamation laws.

The moon might look barren and very inhospitable for humans, but actually its surface dirt – known as regolith – is rich in oxygen.

Now scientists have figured out how to extract oxygen from lunar soil, Science Alert reported.

Regolith samples collected from previous lunar missions revealed that oxygen in the moon’s surface is chemically bound to other substances in the form of oxides and can’t be used immediately.

Since the real samples are valuable, the researchers used “fake” lunar dirt, created from terrestrial materials, in their study.

The team, led by Bethany Lomax of the University of Glasgow, used an electrolysis technique to extract about 96 percent of the oxygen in the sample in a matter of 50 hours.

“This process would give lunar settlers access to oxygen for fuel and life support, as well as a wide range of metal alloys for in-situ manufacturing,” said James Carpenter, lunar strategy officer of the European Space Agency, who was not involved in the study.