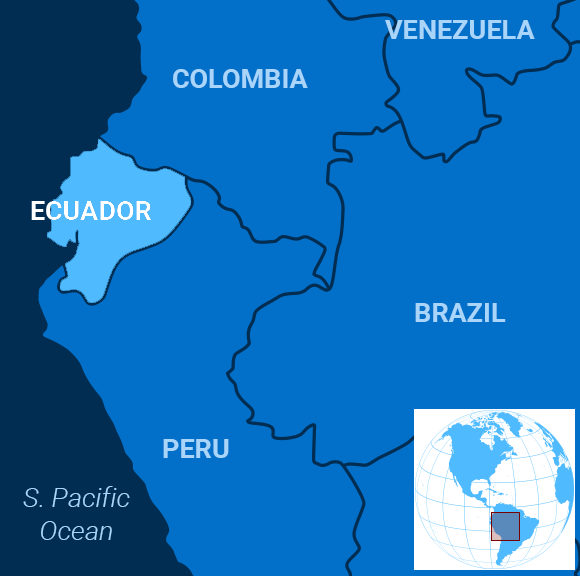 Ecuadorian protesters recently seized six police officers in the capital of Quito, paraded them on a stage as a throng cried “murderers, murderers,” and forced the officers to carry a coffin bearing the body of an activist whom they allegedly shot during the demonstrations. The protesters also threatened a Bloomberg reporter covering the scene.

The protesters eventually released the officers, wrote the BBC. Even so, the unrest compelled President Lenín Moreno to move his government to the coastal city of Guayaquil.

It also led to Moreno walking back his cuts to the subsidies – which had initially caused a spike in gas prices and triggered the protests earlier this month – after meeting with protesters Sunday, reported Reuters.

The cancellation of the subsidy was part of a $4.2 billion loan agreement with the International Monetary Fund to save $1.5 billion from the budget. But the anger snowballed after a police crackdown on the demonstrations resulted in at least two deaths and dozens of injuries.

“What the government has done is reward the big banks, the capitalists, and punish poor Ecuadorians,” labor union activist Mesías Tatamuez told the Guardian.

Other factors are at play, though.

Moreno’s reforms – which are now under review – also cut wages for new public sector jobs, required civil servants to work for free one day a month and reduced vacations for bureaucrats from 30 to 15 days annually, wrote Al Jazeera. Those measures added to a sense of betrayal that has also fueled the violence. Elected in 2017, Moreno was nominally a leftist. But he’s moved to the right.

Brutal murders of journalists in a region along Ecuador’s northwestern border with Colombia shocked locals and highlighted the government’s powerlessness over lawless sections of the country, too.

Similar protests helped oust presidents of Ecuador in 1997, 2000 and 2005. But Moreno is holding firm. He has refused to restore the subsidies. “I don’t see why I should if I’m making the right decisions,” he said, according to Reuters. But Agence France-Presse noted that oil pipeline shutdowns related to the discontent are costing Ecuador millions in revenues that are desperately needed to pay back the IMF.

Moreno’s popularity stands at 30 percent, according to polls, down from 70 percent two years ago.

Worryingly, the Washington Post reported, similar crises have broken out throughout Latin America. In Argentina, Bolivia, Brazil and Peru, for example, leaders are under pressure to cope with pent-up frustrations. In Central America, citizens are voting with their feet, setting off an immigration crisis in the US.

British and European negotiators struck a deal on Brexit Thursday, bringing the UK one step closer to leaving the European Union by the deadline of Oct. 31, the Washington Post reported.

The deal would mean a sharper break than negotiated by Prime Minister Boris Johnson’s predecessor, Theresa May: The UK would likely take a radically different approach to trade and tax policy than the bloc, for example.

European leaders are expected to give the agreement preliminary approval before it faces a greater challenge – winning the green light from the British Parliament.

Many believe there is no chance of it passing: Hardcore Brexiteers are already saying they will hold out against Johnson, while the Labour Party opposes the deal and Northern Ireland’s Democratic Unionist Party is in rebellion over it.

Johnson hopes to force the House of Commons’ collective hand by convincing European leaders to rule out any further delays. However, Germany and France among other EU states are unlikely to go along, fearing potential economic chaos as a result of a no-deal Brexit.

Qatar adopted a new minimum wage law and said it will scrap mandatory exit visas for all ‘guest’ workers in an attempt to clean up its image ahead of hosting the 2022 World Cup, reported Reuters Thursday.

Qatar relies on about two million migrant workers which make up the lion’s share of its labor force. For years, the country along with its neighbors in the Gulf have come under international scrutiny for its restrictive rules and poor labor conditions for its migrant workers.

The majority of these come from other parts of Asia, particularly Bangladesh, India and the Philippines, and work in low-paid menial jobs.

Qatar also said it would end the sponsorship system – in Qatar, workers must get their employers’ consent before changing jobs, which some say encourages abuse.

The International Labor Organization described the new measures as a “momentous step” in improving the rights of migrant workers.

When School Is Torture

Nigerian President Muhammadu Buhari is under pressure to crack down on abuse at Islamic schools after a third police raid in less than a month found hundreds of men and boys held captive, Africa News reported Thursday.

Police freed more than 500 people at a school in Buhari’s hometown of Katsina in northern Nigeria, in two separate raids earlier this week.

The latest raid puts the number of freed captives at nearly 1,000, including hundreds of men and boys freed last month from another state.

Buhari, meanwhile, vowed to tackle the institutions themselves.

“The government cannot allow centers where people, male and female, are maltreated in the name of religion,” a presidential spokesman said.

Islamic schools, known as Almajiris, are common in the Muslim north of Nigeria and about 10 million children attend them, Agence France-Presse reported.

Activists have long demanded the government reform or end the Aljmajiri system, arguing that it fails to provide a proper education. However, some say this type of schooling is the only option for many destitute children.

Humans might not be able to regrow lost limbs like salamanders or axolotl – a “walking fish” – but they are able to regenerate cartilage, according to a recent study.

Scientists discovered that human bodies possess specific microRNA molecules that are similar to the ones that aid salamanders in limb regeneration, Discover Magazine reported.

They noted that the proteins got progressively younger as the scientists moved down the leg, from hip to knee to ankle samples. This means that the microRNAs were more prevalent in the lower areas, and suggests that cartilage renews itself faster at lower extremities.

The study counters the belief that joint cartilage cannot repair itself and could lead to new discoveries in treating joint injuries.

The study authors suggested that boosting production of microRNA in joints could slow or even stop osteoarthritis – the world’s most common joint disorder.

Co-author Virginia Byers Kraus is now targeting arthritis, but hopes one day to give humans the ability to regenerate limbs.

“We think of it as ‘boosting our inner salamander capacity,’” she told Newsweek. “We wonder, might it be possible to someday regenerate a human limb based on a deeper knowledge of how humans and salamanders are alike and unalike.”