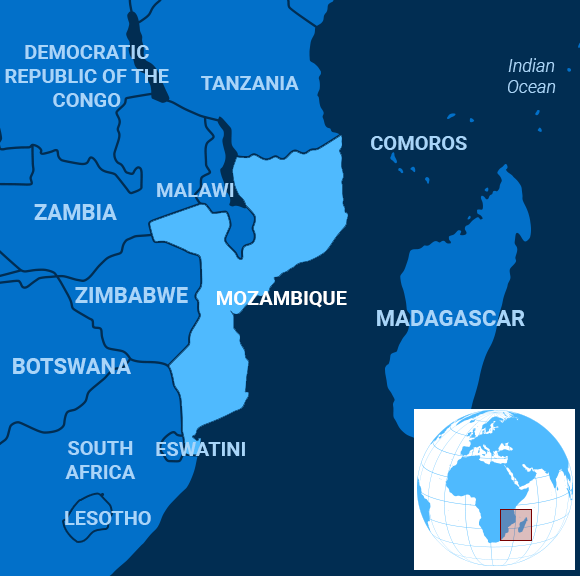 Police officers allegedly killed an election observer in Mozambique a week before the presidential vote on Oct. 15. Reported by Human Rights Watch, the incident was just one flare-up of recent violence in the southeastern African country.

The elections were supposed to be a celebration of democracy. President Filipe Nyusi, who is now running for re-election, negotiated a peace deal with the Mozambican National Resistance (Renamo), a militant opposition group, earlier this year. Nyusi also recently inked a $33 billion deal with ExxonMobil for a mammoth liquefied natural gas project that Bloomberg said could transform the former Portuguese colony’s $15 billion economy.

But, as African Arguments explained, corruption allegations against officials in Nyusi’s ruling party, the Mozambique Liberation Front (Frelimo), soured many voters’ perceptions of their head of state. The allegations centered on $2 billion of debt that public authorities had secretly amassed, leading the International Monetary Fund in 2016 to cut off aid that was crucial to the well-being of ordinary Mozambicans.

Nyusi is also battling an insurgency in the country’s north where terrorists affiliated with the Islamic State have staged attacks. Russian soldiers have reportedly been seen in the area, suggesting the president feels that he can’t squelch the violence. Russia denies its involvement, however.

With armed uprisings in multiple regions, the opposition in tatters and promises of prosperity yet to materialize, many voters have lost faith in their government, especially the young.

“The youth are not interested in the vote because they are tired,” Andre Cardoso, a 24-year old rapper from Maputo who goes by the name MC Chamboco, told Chinese news site, CGTN Africa, which covers the continent. “There are many problems that they are facing but they don’t see change. They are disillusioned. Even those voting for the first time don’t believe there will be change.”

Free and fair elections are impossible, warned Jasmine Opperman, an Africa specialist with TRAC, the Terrorism Research and Analysis Consortium, in a Voice of America video. In the north, people are too afraid to go to the polls, she said. Reuters also noted that in regions where cyclones struck earlier this year the government still has not given out identity documents necessary for voters to cast ballots. And some urged voters to stay at the polling stations after voting to make sure their ballots weren’t stolen, Al Jazeera reported.

Nyusi’s Frelimo party, which has held onto power since independence nearly 45 years ago, won recent municipal elections with only a slim margin of victory. Opperman felt as if Nyusi and his allies were unlikely to cede power if they lose this time around.

If developments continue in their current vein, Nyusi might cling to power but he might not have a country to run.

With 98 percent of the vote counted, opposition candidate Gergely Karacsony won more than half of the vote in Sunday’s mayoral elections against Fidesz-backed incumbent Istvan Tarlos.

“We will take the city from the 20th century to the 21st,” Karacsony told supporters after his victory. “Budapest will be green and free, we will bring it back to Europe.”

The victory is a major blow to Orban, the country’s four-term prime minister who “fostered a new era of autocracy in the country,” the Washington Post wrote.

During his tenure, he has crushed the independent press and brought independent branches of the government under his control, the newspaper wrote, while at the same time tussling with Brussels over immigration and rule-of-law issues.

Orban, once a student leader in the pro-democracy movement opposed to the Soviet presence in the country in the late 1980s, has long boasted about successfully creating an “illiberal state.”

Even so, Karacsony mused during his victory speech that the election result in Budapest was similar to one in Istanbul earlier this year: When the Turkish ruling party also suffered a humiliating loss, the Post wrote.

Now the opposition hopes to leverage its victory to oust Fidesz in the general elections in 2022.

Police opened fire on demonstrators as they ransacked military posts and blocked roads with burning tires in the capital, Conakry, and in the northern opposition stronghold of Mamou, Reuters reported.

Conde’s second term expires in 2020 and he is constitutionally barred from a third. To get around this, he has had his government look into options to create a new constitution, sparking calls for protests from opposition leaders.

Conde’s first election win in 2010 ended two years of military rule that followed a quarter century of dictatorship, and raised hopes for democracy to take root in the country.

However, Conde has responded to protests by placing opposition leaders under house arrest and effectively banning street protests, according to Human Rights Watch.

The unlikely alliance came after the US, the Kurds’ main ally, announced Sunday it was preparing to withdraw remaining troops from the region, according to BBC. The US began its withdrawal last week, paving the way for Turkey to attack the Syrian Democratic Forces (SDF), which it says harbors terrorists due to its connection with Turkish-based Kurdish separatist groups.

The Syrian government’s new alliance with the Kurds marks a shift for the SDF, which took the lead in fighting – and defeating – the Islamic State alongside American troops: It is now allied with the same government, supported by Russia, that vowed to retake all Syrian territory from the Kurds and other rebel groups, the New York Times noted.

The Kurds’ commander-in-chief Mazloum Abdi said he anticipates painful compromises but added, “if we have to choose between compromises and the genocide of our people,” the choice is simple.

People who lived more than 300,000 years ago lacked proper food storage, but that didn’t mean they weren’t capable of dietary planning.

Archaeologists have discovered evidence that ancient humans stored bones from the animals they hunted so they could eat the marrow later, New Scientist reported.

The researchers analyzed over 80,000 animal bone specimens from a cave in Israel and found cut marks on a majority of them consistent with preservation and consumption.

In their study, the researchers suggested that the marks resulted from the effort needed to remove the dried skin from bones that had been preserved.

The team also simulated the cave conditions to determine the longevity of bone marrow and whether it remained nutritionally beneficial after a long time.

The results revealed that the marrow in skin-covered bones could have endured nine weeks of exposure without losing much nutritional value.

The findings are thought to be the first archaeological evidence of food preservation and delayed consumption, which suggests that early humans were capable of foresight and planning.

“This is a game changer for our modern conceptions about our ancestors because it is believed that early hominids were not capable of or not accustomed to delayed consumption,” said study co-author Ran Barkai.