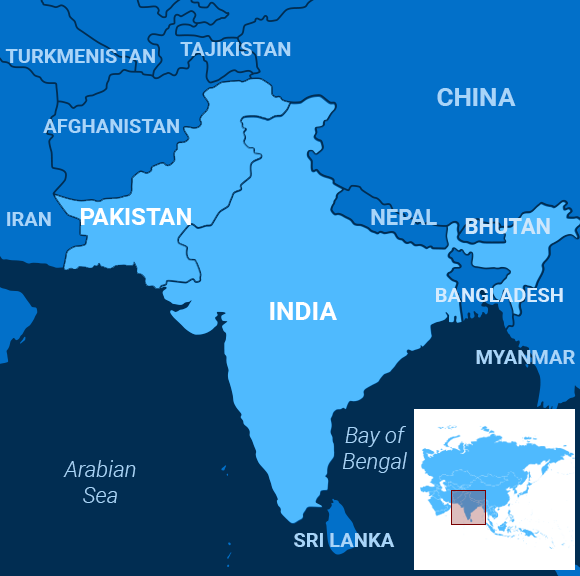 Most of the focus on Kashmir lately spotlights India’s crackdown in the disputed region along the Pakistani border that it controls.

But trouble has been brewing in Pakistan’s zone of control, too.

Recently Pakistani police arrested 22 demonstrators in Azad Jammu and Kashmir – an area that Pakistan administers – who were calling for independence for the larger region. Police said the protesters got too close to the so-called Line of Control that separates India and Pakistan in the region, reported Dawn, an English-language newspaper in Pakistan.

Protesters argued that Kashmiris could resolve the international dispute more quickly if they were free of both Pakistani and Indian influence. They don’t feel represented by anyone. “Our main demand is that the international community must take steps to resolve the issue of Kashmir and take steps to send back the armies of both countries [from Kashmir],” Toqeer Gilani, a leader of the Jammu Kashmir Liberation Front, told Al Jazeera.

As the New York Times explained, the police response to the activists reflects not only an increase in suppression that’s designed to quell talk of separation from Pakistan but also a need to stop Islamic militants who have become increasingly agitated as India has sought to exert near-totalitarian control over its side of the region, a state known as Jammu and Kashmir.

When it became part of India more than 70 years ago, Jammu and Kashmir was granted a special autonomous status.

In August, Indian Prime Minister Narendra Modi ordered an end to that status, abolishing local government, sending in troops, confining people to their homes, shutting down internet access and imposing other harsh changes. Human rights groups condemned those actions, the Atlantic magazine reported, while many Indians saw them as bold moves meant to bring the restive region to heel.

India and Pakistan have fought wars over Kashmir, whose partition dates back to the end of British rule in both countries in the late 1940s. Cross-border skirmishes over the region continue to this day. Speaking at the United Nations recently, Pakistani Prime Minister Imran Khan warned that the two powers might deploy nuclear weapons against each other if the situation were to escalate.

Pakistani officials have estimated that such a nuclear exchange might kill hundreds of millions of people and trigger a worldwide recession, Newsweek wrote.

Civilians on the Indian side of the border wish Modi would listen.

“We really hope these leaders will do something to rid us of conflict,” said Nazir Ahmed, an Indian schoolteacher in Kashmir, in an interview with the Guardian. “Conflict is like a cancer hitting every aspect of life. And Kashmiris have been living inside this cancer for decades now.”

Cutting Off Your Nose…

Turkey began airstrikes on Kurdish forces fighting in northeastern Syria Wednesday to rid the region of “terror” and to create a “safe zone” for Syrian refugee repatriation, while the Kurds said the assault was disrupting operations against Islamic State, CNBC reported.

Syrian Democratic Forces (SDF) spokesman Mustafa Bali tweeted that Turkish warplanes were attacking “civilian areas,” and the SDF appealed to the US for a no-fly zone.

The assault comes days after the US’ decision to withdraw troops from the area following a phone call between Turkish President Recep Tayyip Erdoğan and US President Donald Trump. The withdrawal left the US’ former allies in the fight against Islamic State vulnerable to an attack by Turkey, which sees the SDF as a security threat due to their connection with Turkish-based Kurdish separatist groups.

A gunman with grenades and pipe bombs killed two people after attacking a synagogue in the eastern city of Halle Wednesday, underscoring fears of rising xenophobia and anti-Semitism in the wake of far-right gains in recent German state elections.

The attacker, “with right-wing extremist motives,” attempted to breach the door of the synagogue where more than 70 worshippers marked the Jewish holiday of Yom Kippur, German magazine Der Spiegel reported. Failing to get inside, he shot at cars and bystanders, and at people in a Turkish kebab restaurant before fleeing in a vehicle.

The suspect, identified as a 27-year old male from Halle in the state of Saxony, broadcast his assault on Amazon’s live-streaming video platform Twitch, speaking in English and saying he was a Holocaust denier, the Independent reported.

The attack follows years of rising anti-Semitism across Germany: Attacks against the Jewish community rose 20 percent between 2017 and 2018, according to German police.

Meanwhile, a recent European survey of 16,000 Jews across the continent found that 89 percent felt anti-Semitism had increased in their country, reported the European Union Agency for Fundamental Rights.

The attack comes one month after support for the far-right Alternative für Deutschland party surged in two German state elections – Brandenburg and Saxony. A third election in the east later this month is expected to continue that trend.

Thousands of South Koreans rallied in the streets of the capital Wednesday calling for the ouster of President Moon Jae-in’s hand-picked justice minister, Cho Kuk, whose family is being investigated for shady financial dealings and other misconduct.

The protests, which began a few weeks ago, have left Seoul in chaos as both supporters and opponents of the justice minister compete to be seen and heard, the Associated Press reported.

Cho has denied any wrongdoing and vowed to press ahead with reforms.

Meanwhile, the recent protests, a weak job market and failed diplomacy with North Korea has tarnished Moon’s image as a reformer less than a year before the ruling party faces elections.

Cats aren’t so different from dogs when bonding with their owners, according to a new study.

Oregon State University researchers discovered that cats can form secure or insecure bonds with humans, a trait that is also seen in dogs, primates and human babies, CNN reported.

In the experiment, a cat or kitten would spend two minutes in a room with its owner or caregiver. The person would then leave the cat alone in the room for two minutes, then return for a two-minute reunion.

Results revealed that 65 percent of the felines had developed “secure bonds” with their owners, meaning that after the period of separation, they would continue to explore their surroundings and pay attention to their owner.

The insecure ones, however, tended to be very clingy toward their owners or simply avoid them, which are both signs of stress.

“There’s long been a biased way of thinking that all cats behave this way,” said lead author Kristyn Vitale. “But the majority of cats use their owner as a source of security. Your cat is depending on you to feel secure when they are stressed out.”

Vitale hopes the behavioral study will be used to place more cats in homes in the future as so many are still in limbo in animal shelters.