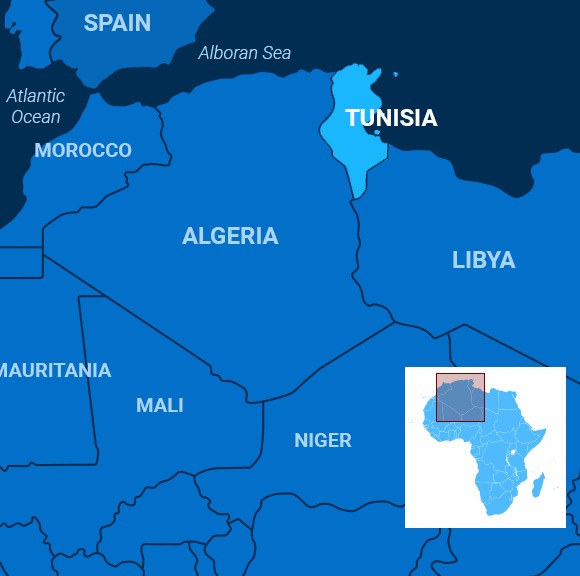 If Nabil Karoui wins Tunisia’s runoff presidential election on Oct. 13, he might deliver his victory speech from a jail cell.

Imprisoned in August on charges of money laundering and tax evasion, the media mogul claims he is the victim of a political vendetta, the Associated Press reported. Judges have rejected his petitions for release, but they have permitted him to remain on the ballot because he has not been convicted.

The two men, both political outsiders, garnered the most support in Tunisia’s first round of voting on Sept. 15, shocking the North African country’s political establishment.

Since civil unrest in Tunisia sparked the Arab Spring in 2011, the moderate Islamist party Ennahda and a coalition of secularist opposition groups have dominated the country’s politics. But they have failed to deliver on promises of prosperity. Tunisia’s unemployment rate stands at 15 percent overall – it’s more than double that among young people – and inflation is high, wrote France 24.

“Tunisians Are Fed Up With Their Entire Post-Revolution Political Class,” was the headline in World Politics Review.

Neither Karoui nor Saied has ever held elected office. Karoui, who is leading in the polls, has backed secular political parties in the past. More recently, however, he’s used his television stations to promote his humanitarian efforts around the country. Critics have labeled him the “macaroni” or “soup guy” for his televised food donations. But his efforts have stirred devotion among poor Tunisians.

“The people love him, the politicians do not love him, that’s why he’s in prison,” fishmonger Lotfi Bourguiba told Al Jazeera.

Saied has a far humbler profile, Middle East Eye reported. He was secretary-general of the Tunisian Association of Constitutional Law in the 1990s and a regular television commentator during the country’s revolution. His critics have warned that he has expressed opinions on few policy questions and might harbor conservative views that many Tunisians might not welcome.

Saied’s stiffness has earned him the nickname Robocop, the Carnegie Endowment for International Peace wrote. Karoui’s wealth and legal troubles have led many to refer to him as Don Corleone, the mafia boss out of Mario Puzo’s novel “The Godfather.”

Tunisia is the only country in the region where democracy took root after the Arab Spring, argued Safwan M. Masri, a scholar at Columbia University, in the Financial Times.

To keep it growing, whoever wins the presidential election will need to quickly deliver on promises of improving the economy.

After all, Tunisians understandably want to see the value of democracy.

North Korea broke off nuclear talks with the United States over the weekend, dashing hopes for ending the months-long stalemate between the two countries.

The country’s chief negotiator Kim Myong Gil said Saturday that the US would not “give up their old viewpoint and attitude,” adding that it also did not bring anything new to the negotiating table, Reuters reported.

US officials responded that the comments did not reflect “the content or spirit” of the weekend’s talks and stressed the importance of more intensive engagement.

The talks, held in Stockholm, were the first real ones since leaders of both countries met in June and agreed to restart negotiations following a failed nuclear summit in February.

Last week, North Korea test-fired a new ballistic missile in a bid to pressure Washington to come to the table with new concessions.

The hearing began last week with Case 4000, which alleges that Netanyahu gave Israel’s largest telecommunications company an advantage in return for favorable coverage on their news site, Al Jazeera reported.

The hearings are expected to end Monday.

If Netanyahu is indicted, he will go on trial over the next few months.

Netanyahu has denied all charges even as he is fighting for political survival after failing to achieve a clear win in parliamentary elections in April and in September.

Over the past few weeks, he has failed to form a unity government with his main rival, Benny Gantz, after the latter said he would not serve in a cabinet led by a leader facing indictment.

Tens of thousands of demonstrators donning facemasks marched Sunday to protest a new law against face coverings at public gatherings, the latest show of defiance in the nearly four month-old pro-democracy movement.

Pro-democracy members of the legislature opposed the face mask ban on Saturday and accused Lam of overstepping her legal authority.

Protests in Hong Kong first began in June against a now-abandoned extradition bill, but have since evolved into a pro-democracy movement against China’s increased involvement in the territory.

The demonstrations have caused severe economic strain on the region and tested the patience of the Chinese Communist Party, which has threatened to use force against the movement.

Most commercial tea bags nowadays are made of paper, but some premium brands are switching to silky plastic pouches.

It might seem like an elegant choice, but scientists recently discovered that these same plastic bags are potentially hazardous for tea aficionados, according to Smithsonian Magazine.

Scientists recently studied several tea brands that use the plastic pouches in order to determine the amount of microplastics in a hot cup.

In their experiment they cut open several bags, removed the tea and immersed the empty pouches in boiling water. Using an electron microscope, the team found that a single tea bag released billions of micro- and nano-size plastic particles into the water.

The same result occurred when they dunked uncut bags in hot water but the team didn’t find any plastic particles when tea leaves were brewed with a metallic strainer.

Microplastics have become ubiquitous in recent times and can even be found in drinking water, according to the World Health Organization.

The authors noted that the amount in a single cup of tea might not pose health risks to humans, but uncertainties remain about the effects of long-term exposure.

“Overall, the knowledge on adverse effects of plastic particles on human health is still lacking,” the researchers wrote. “And there is an urgent need to investigate potential toxic mechanisms in higher vertebrates and humans.”