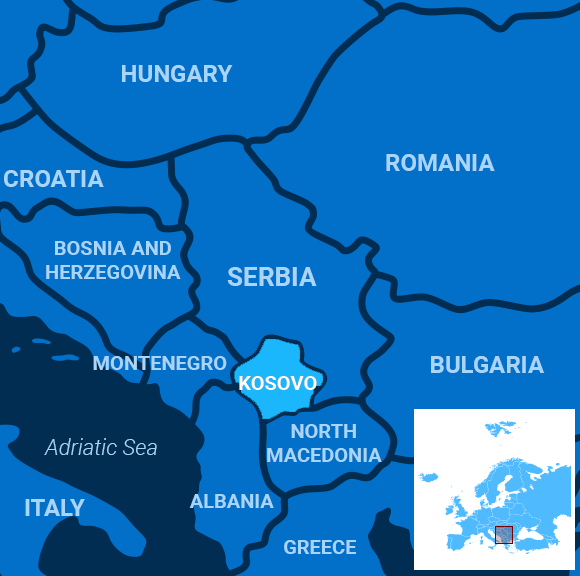 Getting the House in Order

Voters in Kosovo are preparing to elect a new parliament for the fifth time in 12 years.

The Oct. 6 vote illustrates the political instability that has prevented the tiny country – the newest in Europe and the second newest in the world after South Sudan – from achieving important political, economic and social milestones, the Balkan Investigative Reporting Network wrote.

One of the most important challenges facing Kosovo is establishing normal relations with its northern neighbor, Serbia. Carved from Serbia after a NATO bombing campaign that followed the breakup of Yugoslavia and the bloody Kosovo war for independence in the 1990s, Kosovo declared its independence in 2008 after it became clear that leaders in Belgrade were not going to recognize the new state, in part because of Serbia’s historic ties to the region.

Relations have yet to improve. A year ago, the Irish Times reported, Kosovo slapped 100 percent tariffs on Serbian imports in protest against a Serbian campaign to freeze Kosovo out of international institutions. Kosovo is not a member of the United Nations.

The fate of ethnic Serbians in Kosovo, where most citizens are ethnic Albanians, is an especially thorny issue.

The divide is stark in Mitrovica, where ethnic Albanian Kosovars live on one side of the river that runs through the northern town and a Serbian minority community lives on the other, as this BBC video shows. Authorities blockade the bridge spanning the river to prevent violence from breaking out between the two sides.

Kosovar President Hashim Thaci and Serbian President Aleksandar Vucic have discussed swapping land in order to move ethnicities into their respectively friendly countries, but Europeans frown on the idea, fearing such moves could further inflame tensions, Radio Free Europe explained. Others have raised alarms about setting a precedent for redrawing borders.

Speaking at the United Nations, Vucic recently noted that the impasse is hurting his country’s economy, noted B92, a Serbian news outlet. He portrayed Kosovar negotiators as obstinate. But Serbia and its allies – particularly Russia – have worked hard to undermine Kosovo, including convincing numerous African governments to withdraw their recognition of the tiny country, added Euractiv.

EU and American diplomats need to get involved, argued Andreas Wittkowsky, a Berlin-based peace and security specialist, in a blog post for Carnegie Europe. The border question, the prospect of EU enlargement in the Western Balkans and the fate of the region’s economy hang in the balance, risking the spread of instability in a region where violence once thrived.

Kosovars have plenty of reasons to get their house in order. Hopefully, the elections help that process along.

North Korea said Thursday that it tested its first submarine-launched ballistic missile in three years, in an attempt to increase pressure on the United States ahead of the resumption of nuclear talks this weekend.

The test, on Wednesday, was described as North Korea’s most high-profile weapons launch since it began nuclear talks with the US last year, the Associated Press reported.

Analysts say the weapon called the Pukguksong-3 is a medium-range missile capable of traveling more than 950 miles, and has the ability to be launched via a submarine – which makes early detection difficult.

Meanwhile, the Pentagon rejected North Korea’s claim saying Thursday that the missile was not launched from a submarine but from a sea-based platform or barge.

North Korean and US officials are due to meet Saturday after the last summit in February failed to produce a breakthrough.

Analysts told the AP that Wednesday’s test was a demonstration by North Korea of what it could do if diplomacy fails again.

At the same time, Pyongyang recently warned the US that negotiations might end completely if Washington fails to offer new proposals by December.

Merkel told crowds in the northern port city of Kiel that despite all the progress made in the east since the fall of the Berlin Wall 30 years ago in November, German unity is still an ongoing process, German broadcaster N-TV reported.

“Germany unity is not something that is wrapped up or completed at one time but rather a continuing process – a constant goal that affects all Germans,” the chancellor said.

Since reunification, the eastern states that once made up the former German Democratic Republic continue to lag behind their western counterparts economically, and many residents there say they feel underrepresented in politics and the media.

A poll last week found that more than half of residents in eastern Germany believe that reunification was not a success, with almost 60 percent reporting that they feel like second-class citizens, Financial Times reported.

Analysts say those sentiments led to significant gains for the right-wing Alternative fuer Deutschland (AfD) in Brandenburg and Saxony elections last month. The party is expected to double its share in the upcoming Thuringian state elections Oct. 27.

Iran approved a landmark law that will allow Iranian women married to foreigners to pass their citizenship to their children, a move hailed by civil rights groups as a step toward more inclusion and equal rights, the Independent reported.

The hardline Council of Guardians, a constitutional panel made up of senior conservative Shia clerics, surprised many Wednesday by approving the law passed by parliament earlier this year.

In Iran, at least 30,000 Iranian women married to foreigners, particularly those wedded to refugees from Afghanistan, have had a hard time obtaining healthcare, education and employment documents for their children. Their situation prompted the change in the rules.

The new rules don’t grant completely equal access to citizenship since women still need to apply for it for their children, whereas children of Iranian men receive it automatically.

Such laws exist across the Middle East such as in Jordan and Lebanon, the legacy of 19th century Franco-Belgian constitutional principles that influenced the region’s legal systems, the newspaper wrote. Some countries such as Morocco and Tunisia have repealed these rules.

Parents apparently have been debating whether to feed their children breast milk or bottled milk since prehistoric times, according to a recent study.

The feeding vessels had tiny spouts for the milk to flow and were small enough for a child to hold. Some also featured animal feet and heads, serving as toys as well as baby bottles for the prehistoric children.

Dunne explained that this peculiar pottery emerged as Europeans changed from hunter-gatherer societies to agrarian communities.

During this period, parents used milk from domesticated sheep and goats to feed their infants, which may have contributed to a population increase that took place at the time.

The baby boom, however, came with risks to individual health: The vessels weren’t sanitary, and animal milk doesn’t have the same nutrients and antibodies as human milk.

Nevertheless, the study reveals more about the role of motherhood and children in ancient societies.

“[Infants] made up a high proportion of past populations,” said bioarchaeologist Sian Halcrow, who was not involved in the study but wrote a commentary to accompany it. “And if their health and experience is poor, that’s obviously detrimental to society’s function.”