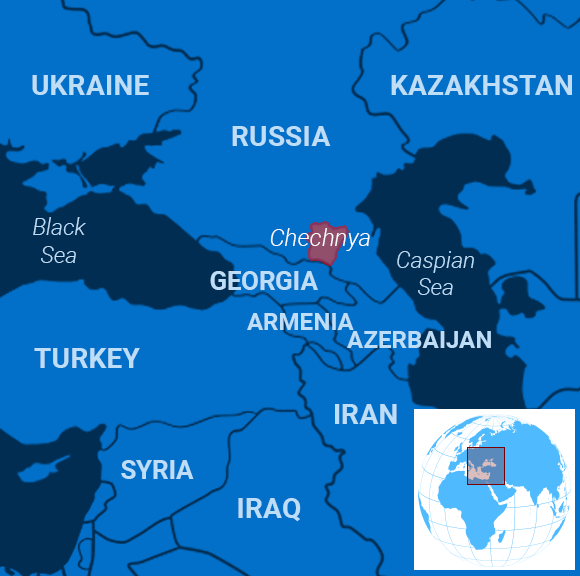 On a recent visit to Chechnya, a region of southwestern Russia in the Caucasus Mountains, a writer repeatedly overheard a macho refrain: “The man must take care of and protect his family, otherwise he would not be a man.”

That culture was arguably one reason the Russian military fought bloody wars against separatists in the region in the 1990s and early 2000s, bombing the Chechen capital of Grozny to smithereens.

In 1999, a series of deadly explosions in Moscow and other Russian cities that authorities blamed on Chechen terrorists helped Russian President Vladimir Putin rise to power, though critics charge that Putin orchestrated the attacks for political advantage, explained news.com.au, a news site published by News Corp Australia.

Regardless, today Grozny has been rebuilt, wrote an Agence France-Presse correspondent who covered the Chechen wars and also visited the region recently.

Things are not always as they appear, however.

A BBC crew was in Grozny recently, too. Indeed, the city boasts new roads, skyscrapers, a new soccer stadium and other signs of economic resurgence. But a car bomb also blew up while the British journalists were in town. The “minders” accompanying the journalists didn’t want them to film it. They did so anyway.

Chechnya is not at peace. In an interesting twist, leader Ramzan Kadyrov, a former rebel, is fighting Islamist insurgents in the region with Putin’s backing. Radio Free Europe noted that the fighting has spread throughout the northern Caucasus.

It has spread abroad, too. A Russian citizen recently allegedly assassinated a former Chechen rebel commander in Berlin, a case that’s stumping German authorities who have sought but not received help from Russian officials in this story that reads like a top spy thriller, the New York Times reported.

Kadyrov is also reportedly oppressing his own citizens. Torture, extrajudicial killings and other human rights abuses are among his tools for exercising power, the Guardian wrote.

The oppression of the LGBTQ community is especially severe. Representatives from the Council of Europe, a human rights organization, recently noted that Russian and Chechen officials must answer for well-documented roundups of alleged LGBTQ citizens, Out magazine reported.

Kadyrov said the council had fabricated its findings. “Here men marry women and women marry men,” he said, according to the Ireland-based Gay Community News. “It was like this for thousands of years, and that is how it will always be, whatever the West tells us.”

Every culture deserves respect. But some don’t do their communities any favors.

China celebrated the 70th anniversary of its founding Tuesday with a massive display of troops and military equipment parading in the capital as President Xi Jinping pledged peaceful development and security for the future.

Observers noted that the anniversary celebrations were marked by the country trying to project confidence in the face of mounting challenges, such as the anti-government Hong Kong protests and the trade war with the United States, Reuters reported.

“No force can ever shake the status of China, or stop the Chinese people and nation from marching forward,” Xi said during the celebrations.

He emphasized the importance of maintaining stability with Hong Kong and Macao, while fostering better relations with Taiwan.

He made no mention of the upheavals of the past decades such as the bloody crackdown on pro-democracy protests at Tiananmen Square in 1989.

During the Beijing parade, Taiwan condemned China’s “dictatorship,” saying the country was a threat to peace.

Meanwhile, protesters in Hong Kong called for a “national day of mourning” Tuesday, and thousands demonstrated at multiple locations across the city, Channel News Asia reported.

About 450,000 German car owners joined a class action lawsuit Monday against car manufacturer Volkswagen, demanding damages following the eruption of the diesel emission scandal in 2015 that originated in the US.

The suit marks the first time that Germans can pursue class action suits since its procedural law was amended last year to allow for such claims, Agence France-Presse reported.

VW’s lawyers countered that there was “no harm and no basis to this claim” because “hundreds of thousands of cars are used” on the roads without issue.

It also rejected suggestions by the court to go for a mass settlement, calling it “hard to imagine.”

The trial is expected to last for years. It’s the largest case brought in Germany related to the massive scandal to date. Meanwhile, prosecutors charged three current and former VW executives with market manipulation last week.

Since 2015, the scandal has cost the company more than $33 billion, with $22 billion going to the US. In Germany, 61,000 individual lawsuits have been filed against the company – including by shareholders – with about $2.6 billion paid out so far, AFP reported.

Houthi rebels in Yemen released hundreds of prisoners Monday in a move that has raised hopes of reviving peace talks between rebels and the Saudi-backed Yemeni government.

The International Committee of the Red Cross, which helped facilitate the release, said the Iran-aligned group freed 290 detainees which were held for years in rebel-controlled territory, the Associated Press reported.

Monday’s release also included 42 survivors of an airstrike earlier this month in the southwestern province of Dhamar that killed more than 130. The attack was conducted by a Saudi-led coalition which has been fighting the Houthis since 2015.

United Nations special envoy for Yemen, Martin Griffiths, called for both sides to release their prisoners and invited them to resume peace talks that began last year in Stockholm.

Both sides signed a UN-brokered peace deal in December, which also included a pledge to exchange more than 15,000 prisoners. The deal, however, has never been fully implemented.

The civil war has killed tens of thousands of people and left millions facing acute shortages of food and medical care.

Exotic-looking lionfish are popular pets for aquarists but the venomous creatures have become the bane of some Caribbean and Atlantic Ocean ecosystems.

Lionfish are native to the Indo-Pacific Ocean, but since the 1980s, they have become an invasive species in the Atlantic, probably through aquarium releases, and conservationists are having a hard time controlling their numbers, Forbes reported.

The striped invaders are also colonizing the Mediterranean, which they may have reached via the Suez Canal, wrote Agence France-Presse.

Lionfish are known for their voracious appetites and an ability to reproduce rapidly – a single female can produce up to two million eggs in a year.

And with no known natural predators to keep them in check, lionfish are decimating native fish populations.

So far, spearfishing has been the most effective way to manage the marine animal’s numbers, with regional agencies hosting derbies to hunt the colorful predator.

“The derbies are a good opportunity to educate people about the lionfish and about the danger of releasing aquarium fish into the wild,” researcher Kristen Dahl told Live Science.

Startups are also chiming in by setting up special traps and building robots to zap the invasive species, while ignoring the native ones.

Conservationists also suggest eating them: The fish is a common dish in Pacific communities, and Mediterranean coastal towns have been serving lionfish as means to control its population there.