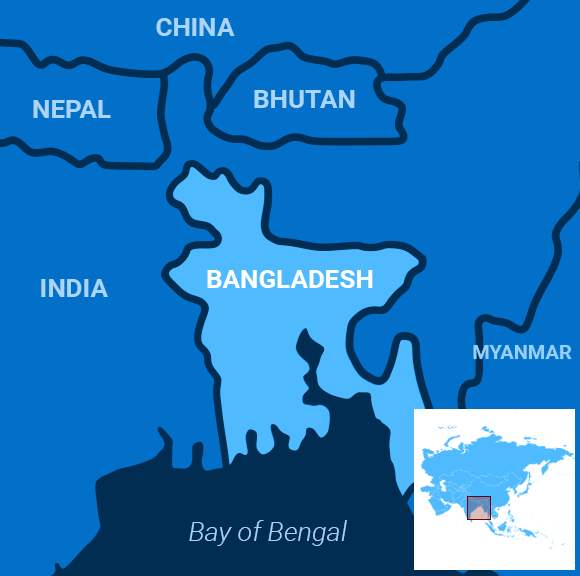 Around one million Rohingya refugees live in camps in Cox’s Bazar in Bangladesh.

They fled their homes in neighboring Myanmar, formerly Burma, a largely Buddhist country where officials in recent years have perpetrated a campaign of ethnic cleansing against the minority Muslim community.

Life in the camps is hard. During the monsoon season earlier this year, mud and raw sewage kept humanitarian groups from visiting, the New York Times reported. The refugees have no rights in Bangladesh and are banned from leaving the camps. Al Jazeera reported on how young Rohingya in the camps have access to only subpar education.

One university in the country suspended a student for being Rohingya, Agence France-Presse reported. That’s because the refugees are forbidden access to higher education.

Technology has been one of the few bright spots in the Rohingya’s existence. Inexpensive mobile phones have helped them keep in contact with the outside world.

But early this month, citing national security, the Bangladeshi government ordered telecommunications companies to shutter service in the camps starting on Sept. 22. Many now fear the Rohingya will become even more isolated, the Economist reported.

“Our suffering will be unlimited if mobile phone communication goes off,” Rohingya refugee Ramjan Ali said.

The ban is the latest twist in the Rohingya’s tragic story.

In 1982, Myanmar’s government stripped the Rohingya of citizenship, reported the Los Angeles Times. They are stateless, in other words. After desperate Rohingya rebels attacked Myanmar’s military installations in the country’s north two years ago, the generals ordered a crackdown.

Since then, Rohingya in Myanmar have faced “killings, rapes and gang rapes, torture, forced displacement and other grave rights violations” by the country’s military, the United Nations recently warned. The threat of genocide is greater than ever, UN officials said. Nobel laureate Aung San Suu Kyi, Myanmar’s civilian leader who spent 15 years under house arrest for advocating for democracy in the country, could be charged with war crimes, too.

Myanmar officials have denied the accusations.

Meanwhile, as the international community debates the issue, Bangladeshis are growing impatient for the Rohingya to leave.

Reuters interviewed Bangladeshi journalist Sharif Azad who initially welcomed the refugees but now wants them to go back home. He and others believe they commit crimes and compete with local workers for jobs. Forests have been cut down to make way for the camps. Aid convoys have clogged local roads.

But where to go? Many of their villages in Myanmar have been destroyed, sometimes to make way for government facilities, the BBC noted. The government showed journalists recently how it was prepared to receive returning refugees. But many fearful Rohingya now accept that they will die in exile.

The Rohingya are a “people of nowhere,” the Washington Post argued in an editorial.

That’s not exactly true. They are somewhere. Just where no one wants them, and they don’t want to be.

Of Genies and Bottles

Hundreds of protesters clashed with Egyptian security officials Sunday in the port city of Suez, the second day of demonstrations demanding the resignation of President Abdel-Fattah el-Sissi.

On Friday, Egyptians took to the streets of several cities in defiance of a six-year ban on demonstrations following the 2013 military ouster of former Islamist President Mohammed Morsi, Agence France-Presse reported.

Security forces have arrested more than 250 people since demonstrations began, the Guardian reported.

The demonstrations were set off by videos released by exiled businessman and actor Mohammed Ali accusing Sissi and the military of corruption. On Saturday, he urged Egyptians to join a “million-man march” on Friday.

Sissi has denied Ali’s charges even as the accusations have touched a nerve in the population, which has been struggling economically over the past few years. In July, one in three Egyptians lived below the poverty line – less than $1.40 a day, according to government figures.

Egypt imposed strict austerity measures beginning in 2016 in exchange for a $12 billion loan package from the International Monetary Fund. Even so, Sissi has been spending billions on large infrastructure projects such as the new capital.

A Strike for the Earth

Environmentalists in Britain and France took to the streets over the weekend to urge their governments to increase efforts to tackle climate change ahead of a United Nations climate summit Monday.

The protests in Paris and Dover Saturday followed a so-called global climate strike: Hundreds of thousands of people around the world demonstrated on Friday to demand action on climate change, the Associated Press reported.

In Paris, environmentalists on Saturday were joined by the anti-government ‘Yellow Vest’ protesters to emphasize the link between economic grievances and environmental concerns.

In the coastal city of Dover, Extinction Rebellion demonstrators disrupted traffic on a cross-channel ferry between England and France, an important trade route between Britain and the European Union.

Meanwhile, the UN’s World Meteorological Organization released a report Sunday showing that carbon pollution, rising sea levels and global warming have all accelerated over the past few years.

Taking Off the Gloves

A Nicaraguan opposition group claimed responsibility Sunday for a series of explosions that rocked the country over the weekend, signaling a change in tactics by those against the regime of President Daniel Ortega.

The little-known Nicaraguan Patriotic Alliance (APN) said it executed a “a series of actions of a military nature” and will continue to do so until Ortega is gone.

“All these actions are carried out and will continue to be carried out…until the dictatorship is broken,” the group said on Saturday, according to Reuters.

Although there were no casualties, the move marks a turning point: Until now, opponents of the regime have largely remained peaceful.

The Central American nation has been gripped by a political crisis since April 2018, when Ortega’s government announced a plan to cut welfare benefits.

Since then, more than 300 people have died in clashes between pro-government forces and protesters, and thousands have been forced into exile.

The aptly named electrical eel can release 650 volts of electric current to stun its prey – that’s more than five times the voltage delivered by wall outlets in American homes.

Turns out that Electrophorus electricus is not the only species that’s zapping the Amazon basin, according to Science Alert.

In their study, researchers analyzed DNA samples from 107 shockers and found that the other two species diverged from E. electricus between 7.1 million and 3.6 million years ago.

Scientists previously believed that E. electricus was the only species of electric eel, first discovered more than 250 years ago.

Although popularly known as “eels,” the creatures are in fact species of knifefish.

E. electricus inspired the invention of the first battery back in 1799, and researchers hope that the new species can be used for further biotechnology research.

“The interest in these fish goes beyond biodiversity,” lead author Carlos David de Santana told the New York Times. “They could inspire new technology. They’re one of the few fish in the world that really carry magic.”