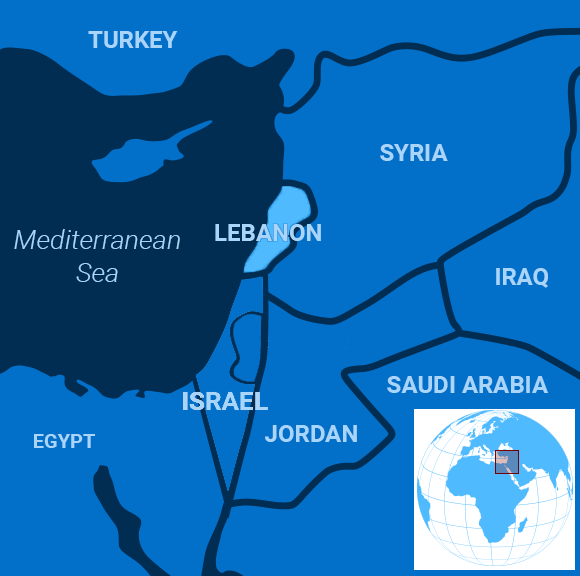 The Daily Star, an English-language newspaper in Lebanon, recently ran an edition that contained no news.

Instead, editors printed a single phrase on each page each highlighting one challenge that the Middle Eastern country is facing. Bankruptcies, currency instability, high pollution and increasingly heated sectarian rhetoric were among the problems they noted. The idea was to sound alarm bells about the country.

“Despite the worsening political, economic, financial and social problems, there is still time to save the country,” The Daily Star’s website said, according to Al Jazeera. “This requires a collaborative effort from all sides and sacrificing for the good of the country.”

Lebanon is facing significant challenges. The country is drowning in unsustainable debt stemming from the country’s 1975-1990 civil war, Bloomberg reported. The country depends on money remitted from ethnic Lebanese communities abroad. It’s so dire that the country declared a state of economic emergency, the Associated Press reported.

Political turmoil in the region adds downward pressure on Lebanon’s prospects. The Iranian-backed Hezbollah militants in the country appear to be planning a new offensive against Israel that is certain to elicit a devastating response.

“Can you see all those mountains?” a Hezbollah fighter in the Bekaa Valley told Foreign Policy. “All of this area is full of missiles. They are all under preparation. Every day, we bring in and deploy them. We have received instructions not to wait for orders [to fire].”

Those comments appear to at least partially corroborate Israeli claims in the Associated Press that Hezbollah has a missile factory in Lebanon.

Israel and Hezbollah have already fired missiles and artillery shells at each other in recent weeks, but CNN noted that neither has the “appetite” for all-out war.

While the US, Israel and other countries have deemed Hezbollah a terrorist organization, the group also fields a political party whose candidates perform well at the polls. As a result, Lebanese Prime Minister Saad Hariri in an interview with CNBC felt impelled to explain that the group is part of a larger picture of foreign and local governments jockeying for power in the region.

Hariri has plenty of other problems. While seeking to curb corruption and spark growth, his country is hosting more than 1 million Syrian refugees who have fled civil war in their homeland. Officials have already deported some of the refugees back home, eliciting calls from Amnesty International to stop.

China’s government issued tariff exemptions on 16 American products Wednesday in a goodwill gesture ahead of new trade talks next month.

The exemptions, which includes shrimp, fish meal and cancer treatment drugs, will take effect Sept. 17 and will last for a year, CNN reported.

This is the first time Beijing has waived tariffs on US goods since the trade war began almost two years ago. Both nations have been slapping tariffs on each other’s imports to the tune of billions of dollars.

Analysts, however, pointed out that the exemptions don’t include major goods such as soybeans or other agricultural products but mainly ones that drive the Chinese economy.

“Chinese tariffs that really matter are the ones on US agricultural and manufacturing goods, produced mainly in states with strong support for [President] Donald Trump,” Artur Baluszynski, head of research at Henderson Rowe, told CNN. “We just don’t see China willing to negotiate on them before the race for US presidential elections really kicks off.”

The trade war has caused a major slump in China’s growth, forcing the government to search for ways to alleviate the impact of the tariffs.

Beijing is now importing soybean from Argentina and Brazil to meet demand, for example.

The move is problematic for US soybean farmers since China was their biggest market before the trade war.

Meanwhile, negotiators are set to meet in Washington in coming weeks to push forward talks to end the trade war even as Trump has tariff increases planned, Bloomberg reported.

Some European Parliament lawmakers criticized the move for tapping into right-wing rhetoric on migration, a key political issue in the bloc, the BBC reported.

“The implication that Europeans need to be protected from external cultures is grotesque and this narrative should be rejected,” said Dutch Liberal parliamentarian Sophie in ‘t Veld.

During the European Parliamentary elections in May, right-wing and nationalist parties made strong electoral gains with promises to curb the flow of immigrants.

Meanwhile, Von der Leyen responded that the role – which will be the EU’s most senior official on migration and security – was included in her political guidelines published in July.

In a letter outlining the position’s brief, she said, “the European way of life is built around solidarity, peace of mind and security…We must address and allay legitimate fears and concerns about the impact of irregular migration on our economy and society.”

She will officially replace EU chief Jean-Claude Juncker on Nov. 1.

Canadian Prime Minister Justin Trudeau on Wednesday formally asked for the dissolution of parliament and called for general elections on Oct. 21, in a bid to win a second parliamentary majority from an increasingly divided electorate.

Trudeau, who was elected in November 2015 promising a very progressive agenda on gender equality and the environment, will face a tough election mostly focused on the economy, the Guardian reported.

For months, he has faced accusations that he acted unethically when he requested the attorney general halt a corruption trial against Canadian engineering company, SNC-Lavalin.

His opponents have used the case and other incidents to indicate that the young prime minister is not fit for office.

His party is expected to use the election to receive support for his government’s climate change policies, including a nationwide carbon tax.

Polls suggest that his Liberal party is deadlocked with the Conservative opposition in regard to the popular vote, but might still have an edge when it comes to winning seats.

In 2016, archaeologists in Ethiopia found the skull of a male Australopithecus anamensis, a poorly understood hominin species that predated the famous human ancestor “Lucy” by more than 600,000 years.

Researchers named the specimen MRD and recently published two studies detailing the origins of the hominin and the environment in which it thrived, Newsweek reported.

The team dated MRD’s cranium to 3.8 million years ago, however, and argued that another 3.9 million-year-old fossil actually belongs to Lucy’s species.

That would mean that both hominins coexisted for at least 100,000 years and that there probably is not a direct evolutionary line between them.

As for their habitat, the second study reported that MRD lived in a dry area near a large body of water, and researchers are now looking into how climate change affected the species.

Human evolution is still a mystery in many respects for scientists, but this recent find might shed more light.

“MRD is a great addition to the fossil record of human evolution,” wrote paleontologist Fred Spoor in Nature. “Its discovery will substantially affect our thinking on the origin of the genus Australopithecus specifically, and on the evolutionary family tree of early hominins more broadly.”