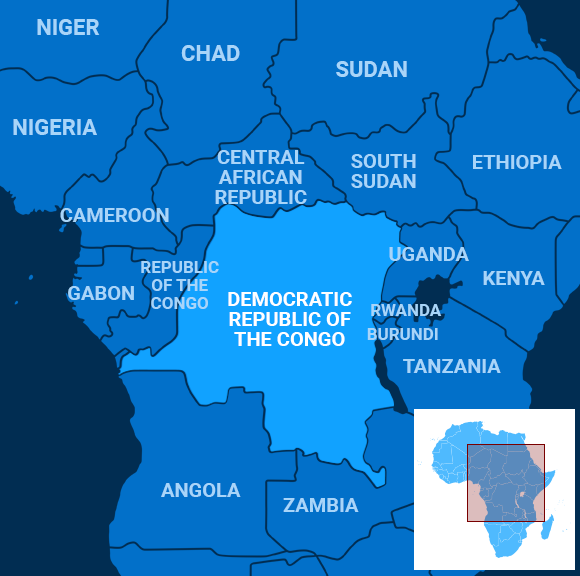 As of late August, more than 2,000 people have perished in the yearlong outbreak of the fatal virus in the Democratic Republic of Congo, according to a European Commission report.

Aid workers and others are sounding alarm bells that the recent crisis is poised to become far worse than that of 2014-2016.

Relative peace had reigned for years in the West African nations of Guinea, Liberia and Sierra Leone when Ebola struck there. In contrast, war and violence have wracked the Democratic Republic of Congo for years.

“To fight Ebola, we need freedom of movement, we need access, we need security,” said UN Secretary-General António Guterres during a recent visit to Congo, according to a press release.

The UN has an approximately 15,000-strong peacekeeping force stationed in the country. The BBC explained the history that drew peacekeepers to the country and required them to remain: the 1997-2003 civil war that claimed 5 million lives and dragged in the country’s neighbors, and fighting that flared up after President Joseph Kabila remained in office in violation of the constitution in 2016. Last year, the Guardian wrote about the “bloody cycle of violence and political turmoil” arising from conflicts between rebels and the central government.

This summer, President Felix Tshisekedi, who replaced Kabila in January, launched a campaign to stamp out renegade militias throughout the sprawling, mineral rich Central African nation. Three soldiers and 20 militiamen recently died in a clash in the northeastern region of Ituri, Agence France-Presse reported.

At the same time, public health specialists face hurdles in Congo that similarly hindered their efforts in West Africa, including community traditions of caring for sick loved ones at home.

“We are asking people to leave the safety of their homes when they fall sick to go to an isolated cell in an Ebola treatment center where their lives are in the hands of complete strangers,” Emanuele Capobianco, a doctor with the International Federation of Red Cross, told SkyNews. “And we are doing all this in communities that have learned to distrust outsiders following decades of violence and unrest.”

But doctors also face dangers as treatment centers have come under attack in the country.

Politics is another factor in the fight against the virus. After seven months in office, Tshisekedi formed his government recently, including officials who critics say are proof that Kabila still wields too much power in the country, wrote Voice of America.

Hopefully Tshisekedi either helps stop Ebola or gets out of the way of those who can.

British lawmakers early Tuesday rejected calls for early elections, while passing a law blocking the UK from leaving the European Union without a deal, the latest blow to the beleaguered new prime minister and the Brexit he has vowed to guide to its conclusion.

The bill received the formal assent from Queen Elizabeth II hours before Prime Minister Boris Johnson suspended parliament until Oct. 14, the Associated Press reported. That elicited fury from opposition lawmakers in the House of Commons who shouted “Shame on you” and held up signs reading “Silenced.”

Meanwhile, the new law would force the government to seek a three-month delay if no deal is reached by Oct. 19. The UK has a current deadline to leave the bloc by Oct. 31.

Johnson insisted that the UK should leave the bloc regardless of whether there is a deal, but added that he believes one can be reached before the deadline.

Also, lawmakers formally demanded the government release emails and text messages among aides and officials relating to suspending parliament and Brexit amid allegations that the suspension is being used to circumvent democracy. The government has no choice but to comply.

On Monday, Johnson met with Irish Prime Minister Leo Varadkar in Dublin to discuss the future of the border between Ireland and the UK, and said that leaving the EU without a divorce deal would be a “failure of statecraft.”

The visit, however, proved fruitless, since there still is no agreement on the Irish “backstop,” which would ensure an open border between EU member Ireland and Northern Ireland, the Irish Independent reported.

Nigeria is planning to repatriate about 600 of its citizens this week from South Africa after a wave of xenophobic violence targeting foreigners has created tensions between Africa’s two heavyweights.

“The first flight will carry 320 Nigerians. We will have another one immediately after that,” Nigeria’s Consul General Godwin Adamu told Agence France-Presse.

The exodus follows rioting in Johannesburg that targeted foreigners and their businesses, and killed at least 10 people.

Violence against foreigners has grown in South Africa along with anti-immigrant sentiment as the country continues to grapple with a 28 percent unemployment rate.

Meanwhile, South African President Cyril Ramaphosa has condemned the violence, adding that “the majority of foreign nationals in our country… are law-abiding and have the right to conduct their lives and businesses in peace,” he said, according to the BBC.

In what was widely seen as a blow to Russian President Vladimir Putin, candidates from his ruling party lost about one-third of their seats in Moscow’s legislative elections, according to the final results announced Monday.

The United Russia party won 25 out of 45 seats in Moscow’s parliament, 13 less than it had after the 2014 elections, the Financial Times reported.

The surprising results underscore how voters opted for alternative candidates as form of protest against Russia’s Central Election Commission, which barred opposition candidates and critics of Putin from running for office.

In the run up to the elections, Navalny urged voters to employ a “Smart Voting” strategy and cast ballots for candidates that would unseat the ruling party.

Despite United Russia holding a majority, Navalny thanked voters for the tactical victory.

“This is a fantastic result for smart voting. We fought for it together,” he wrote on Twitter.

The Wedderburn meteorite has fascinated scientists since its discovery in 1951 near the town of Wedderburn in Australia’s Victoria state.

For decades, scientists have been analyzing bits of the red and black space rock, doled out by Museums Victoria. Recently a team in California got hold of a slice and found a new mineral in it, Smithsonian Magazine reported.

Researchers Chi Ma and Alan E. Rubin wrote in their study that the meteorite contained traces of Fe5C2, known as a byproduct of iron smelting but never before been seen occurring naturally.

“We have discovered 500,000 to 600,000 minerals in the lab, but fewer than 6,000 that nature’s done itself,” Stuart Mills, senior curator of geosciences at Museums Victoria, told Australian newspaper The Age. Mills was not involved in the California study.

It’s still a mystery how the rock came to be, but scientists speculate that it formed in the core of an ancient planet that got shattered in a cosmic collision, launching chunks of rock through our solar system.

So far, out of the 5,390 minerals discovered on Earth, only about 65 are related to meteorites, but they provide a lens into the starting days of the solar system.