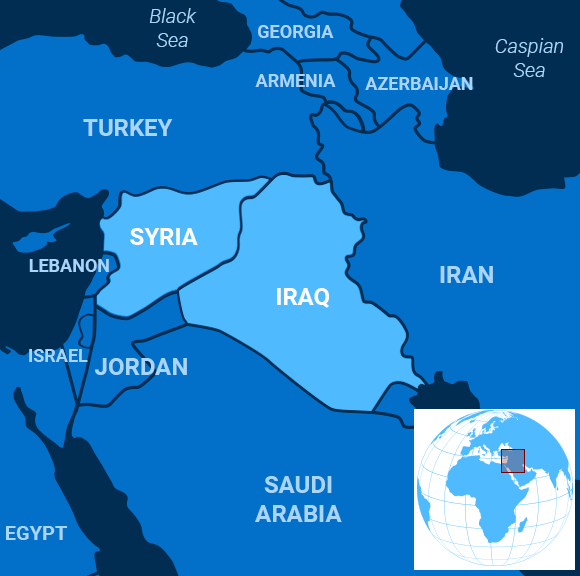 Thousands of displaced wives and children of the vanquished Islamic State now live in the sprawling al-Hawl refugee camp in northeastern Syria.

They lived through a horrific period of Middle Eastern history that Reuters described as dating back to the US-led invasion of Iraq in 2003, climaxing with the Islamic State’s establishment of a “caliphate” in Iraq and Syria in 2014, and ending five years later when US-backed, Kurdish-led Syrian fighters overtook the Islamic State’s last enclave in Baghouz, on the Euphrates River.

It might seem cruel to lock away women and children because their husbands were terrorists and killers. But many of the camp’s residents still believe fervently in the harsh, ultraorthodox Islamic caliphate their menfolk hoped to establish permanently.

“It’s a timebomb waiting to go off. There is no easy solution,” said Syrian Democratic Forces General Mazloum Kobani, who oversees al-Hawl, in an interview with the Guardian. “Even if the foreigners are sent home, the majority are Syrian and Iraqi detainees and if they are not deradicalized that will be a problem for many years to come.”

In a report issued recently to Congress, the military’s watchdog sounded alarms about a potential resurgence of the Islamic State in Syria and Iraq.

The Islamic State can no longer field an intimidating army. But the report found that the terrorist organization has 14,000 to 18,000 combatants who regularly carry out “assassinations, suicides, crop burnings, and ambushes” in Iraq and Syria, wrote Business Insider, adding that the inspector general was critical of the US’ decision to pull troops out of Syria.

Perhaps because of the political climate in the Middle East, President Donald Trump is seeking to take extra precautions against the Islamic State in Afghanistan. As the New York Times reported, however, there is a lack of consensus about what to do and whether the terrorists pose an immediate threat to the US.

Few would argue that the Islamic State doesn’t pose a threat to Afghans. Last month, the militants claimed responsibility for killing more than 60 people and injuring 200 others at a Kabul wedding, reported the Washington Post. Many viewed that incident as an early warning of a growing menace, the Associated Press wrote.

Meanwhile, in the Sahel region of Africa, Boko Haram fighters who have pledged allegiance to the Islamic State have devastated parts of northeastern Nigeria, occupying towns near Lake Chad long enough to attempt to create a new state and society under Sharia law – a West African caliphate, in other words, the New Humanitarian explained.

On the eastern side of the continent, Voice of America reported on Islamic State fighters in Somalia who were planning to launch a recruiting campaign in Amharic, the official language of Ethiopia. Elsewhere on the continent, including in Burkina Faso, Mali and Niger, extremists continue to recruit and carry out attacks on military and civilian targets.

Most of the French have finished their summer break and returned to work or school, an annual event called “La Rentrée“: And with their return comes fresh protests from the Yellow Vest movement.

Around 1,500 people demonstrated in the southern city of Montpellier Saturday, setting fire to a police car and vandalizing several storefronts, Agence France-Presse reported. Smaller protests took place across France including in Paris.

Despite the violence in Montpellier, most protesters marched peacefully through the streets, calling for social justice and the resignation of President Emmanuel Macron.

“We’re all together, we want the government to drastically change its policies… and radical change can only come when this government resigns,” Yellow Vest organizer Alexandre Chantry told AFP.

The protests began over a fuel tax increase last year and quickly developed into a broad movement against Macron’s pro-business policies.

Rallies have been held almost weekly since late 2018 but the number of protesters has been dwindling since their first nationwide protests on Nov. 17, when more than 280,000 people demonstrated in Paris.

Iranian officials announced Saturday they would speed up the country’s nuclear enrichment activities, a move designed to increase pressure on European powers to salvage the 2015 nuclear treaty.

The country has activated a chain of advanced centrifuges which analysts believe will allow Iran to increase its stockpile of enriched uranium on an industrial scale, the Los Angeles Times reported.

This is the third and most serious move to date by Tehran, which promised in May that it would slowly back out of the deal if European signatories didn’t help alleviate sanctions on the nation.

US President Donald Trump withdrew from the deal in May 2018 and imposed “secondary sanctions” in a bid to pressure Iran to agree to a new deal.

The leaders of Britain, France and Germany have been trying to save the treaty and are negotiating with Iran over a $15 billion line of credit.

Meanwhile, diplomatic sources told Reuters that the United Nations nuclear watchdog discovered uranium traces in a Tehran facility, but that it was not enriched to a level needed for weaponry.

Back to the Drawing Board

Afghans hailed US President Donald Trump’s decision to call off talks with the Taliban Sunday, following a bombing that left at least 12 dead including a US soldier last week.

“The peace process was moving forward in an unknown and vague way, because of this, the people were concerned about a Taliban comeback. We welcome the decision by the US president,” Herat resident Negina told TOLOnews, an Afghan news site.

On Sunday, Trump said he was cancelling a planned secret meeting with Afghan and Taliban leaders at Camp David and calling off the peace talks.

The president’s announcement via Twitter came after the Taliban admitted they were behind an attack Thursday in Kabul that killed a US soldier, the Guardian reported.

The move puts an abrupt end – at least for now – to almost a year of diplomacy aiming to end the 18-year war in Afghanistan.

US envoy Zalmay Khalilzad and the Taliban last week had reached an “agreement in principle,” for peace, which would have included the withdrawal of 5,000 US troops from Afghanistan.

The Taliban, for their part, promised to renounce al Qaeda, fight Islamic State and prevent other jihadist groups from using the country as a safe haven.

Of Insects and Puppies

Most pet foods today contain meat-based products to provide nutrition. The problem is that meat production is not very environmentally friendly.

The Dutch firm Protix has a solution: insect-based diets.

Protix is one of a growing number of startups that have been developing insect-based foods in order to provide more sustainable alternatives to traditional pet food.

“Our focus is to lower the footprint of this society,” Protix CEO Kees Aarts told the BBC.

The larvae-based food provides enough nutrients for pets and, per kilogram of protein, uses only 2 percent of the land and 4 percent of the water that raising cattle would.

The company has already been producing ground-up larvae diets for chicken, pigs and fish, but it’s now expanding to producing food for house pets.

The British Veterinary Association said insect-based diets could be the future for cats and dogs, and would allow farmers to export more meat offcuts for human consumption.

Insect-based diets are also a perfect alternative for environmentally conscious owners who have an ethical dilemma about feeding their pets meat-based products.

“Now with insects, they bridge the gap between meat and vegetarianism,” said Will Bisset, the head of innovation for Yora pet foods, which produces bug-based dog food.