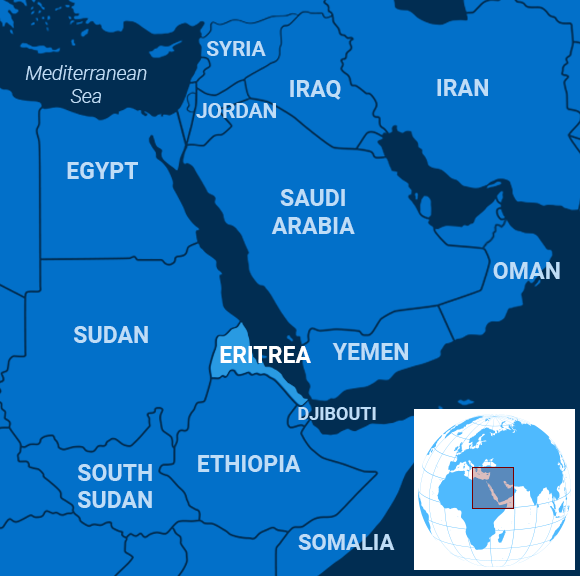 We Don’t Need No Education

Every Eritrean high school student spends the 12th grade at the Warsai Yikealo Secondary School and Vocational Training Center near the border with Sudan.

The students quickly realize that reading and arithmetic are not uppermost in their masters’ minds.

“From the first month, the alarm rings at 5 a.m.,” a former student told Human Rights Watch. “They make you run to the toilet, you (have) five minutes to wash — if we had water, which wasn’t always the case — five minutes to put your uniform on. You get punished if you don’t manage. We would have military training until 8 a.m. The military trainer is always with you; he stays in the dorm. The (physical) punishments were so hard; I was desperate to escape them and so I would try to stick to the rules.”

As the Mail & Guardian explained, the school and training center are located within the Sawa military base. A photograph in the South African newspaper showed a graduating class of students dressed in fatigues, sporting different colored berets and marching like soldiers on parade.

The school-cum-compulsory basic training is an example of how Eritrea is one of the most repressive regimes in the world under former freedom fighter and current President Isaias Afwerki, argued the Globe Post. After they graduate, many students will be assigned to the military or other jobs as part of their “national service,” an indefinite period of time when their life aspirations are put on hold.

Neither the people nor their legislators have ever ratified an Eritrean constitution. Parliament was discontinued years ago. The ruling party, which happens to be the only legal political party in the country, the People’s Front for Democracy and Justice, hasn’t held a convention in years. No independent media outlets exist. International news organizations are banned from stationing journalists in the country permanently.

Quartz wrote about how especially the young have been fleeing the country in order to avoid national service. One would think Afwerki would make changes in order to avoid such an exodus, but his aides told Reuters they needed to build up Eritrean forces to defend against foes like Ethiopia. The two countries fought a war between 1998 and 2000 that only officially ended in 2018.

Eritreans in the US and Europe have launched social media campaigns calling for Afwerki’s ouster, the BBC reported. A regional specialist, Valerie Frank, wrote in African Arguments that the president’s grip on power is only tightening.

Some have openly wondered whether the president might want to ask himself if it’s wise to fill an army that keeps him in power with people who don’t want to serve.

Czech prosecutors dropped a corruption probe against Prime Minister Andrej Babis, who has been accused of embezzling European Union subsidies for small businesses worth about $2.2 million.

The probe centered on suspicions that about 10 years ago, Babis hid his ownership of a farm and conference center known as the “Stork’s Nest” in order to qualify for EU subsidies for small businesses.

A spokesman for the prosecutor’s office said on Monday that it had “changed” its opinion regarding the case, without giving any details, the BBC reported.

The decision could still be overturned if a senior prosecutor decides to review the case.

Meanwhile, the European Union continues to investigate a potential conflict of interest case involving the prime minister: It believes that Babis continues to profit from his Agrofert conglomerate while serving as prime minister, despite his claim to the contrary, which violates Czech laws.

Babis has denied all allegations against him, saying they are politically motivated.

Regardless, he has faced trouble from the street: In June, hundreds of thousands of protesters called for Babis’ resignation, in what is said to be the largest protests since the fall of communism in 1989.

And Justice For Some

A military court in Burkina Faso on Monday convicted and jailed two generals on charges of masterminding a coup in 2015 against the country’s transitional government.

The court sentenced General Gilbert Diendere to 20 years in prison on charges of murder and harming state security, while General Djibril Bassole, accused of treason, was given a 10-year prison sentence, Al Jazeera reported.

Both generals were allies of deposed former president Blaise Compaore, who fled the country in 2014 after attempting to extend his grip on power.

A transitional government took over, but it was overthrown by an elite unit of the army on Sept. 16, 2015 – less than a month before scheduled general elections.

The coup only lasted a week, but it caused a deep rift in Burkina Faso’s armed forces and weakened their ability to cope with attacks from militant groups in a country rife with inter-ethnic violence.

Last month, a terrorist attack killed at least two dozen soldiers, the latest in a series of attacks against the military and also civilians in the past four years.

The decision has been hailed as a victory by many in the country, who had hoped the judicial process would provide more detail on what exactly happened and usher in a period of reconciliation.

“Today, we know who did what and, especially, why,” said Guy Herve Kam, a lawyer representing civilian plaintiffs.

Guatemalan police on Monday arrested former first lady and three-time presidential candidate Sandra Torres on charges of violating campaign finance rules following an investigation by a UN corruption commission that is being forced out after butting heads with the country’s political class.

Torres, who came in second during last month’s presidential election, was charged with “failing to register election financing, and unlawful association.”

Many in the country hailed the arrest – suspicions of corruption have dogged Torres for more than a decade.

She has denied all charges.

Her arrest comes one day before the closing of the International Commission against Impunity in Guatemala (CICIG) whose work has rocked Guatemala’s political class for 12 years: A CICIG investigation toppled President Otto Pérez Molina in 2015 and helped expose a complex multi-billion dollar corruption network, the Financial Times reported.

Her arrest and others announced this week are considered the final acts of the commission, Reuters reported.

Last year, outgoing president Jimmy Morales refused to renew its mandate and barred its chief, Iván Velásquez, from the country.

The new president-elect Alejandro Giammattei – who has also clashed with the commission – intends to replace the CICIG with a state commission, but hasn’t provided any specifics.

Extinction wiped out dinosaurs and many giant lizards that once roamed the Earth, but the ferocious Komodo dragon managed to pull through.

Weighing over 220 pounds and reaching nearly 10 feet, they are the apex predators on the island of Komodo and its neighboring isles in Indonesia.

It turns out that their survival is thanks to their isolation and a few lucky breaks thousands of years ago, according Inside Science.

In a recent study, researchers noted that the big reptiles probably evolved in Australia four million years ago, but fled to the islands only 50,000 years ago, when humans started flowing onto the continent.

It was a smart move, since the ones that remained behind – including their larger cousins – weren’t so lucky.

Komodo island was harsh and uninhabitable for humans, but it didn’t bother the big lizards. Komodos were able to switch their diets to support their needs, including cannibalizing each other.

They can also survive with little food for months, thanks to their coldblooded nature. Meanwhile, females are capable of virgin birth when there are no males around.

In the end, it was humans who inadvertently helped the lizards thrive.

They introduced larger animals, such as pigs and buffaloes, 7,000 to 10,000 years ago, expanding the giant reptiles’ menu and allowing them to dominate the food chain.