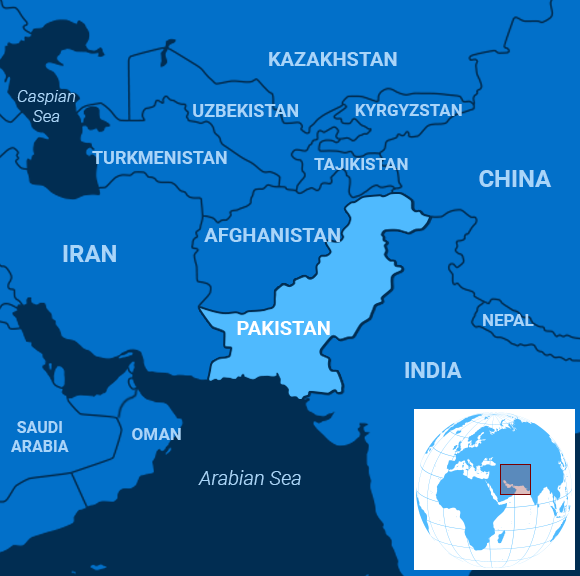 Sakina Bibi innocently believed her marriage was an excuse to dress up and wear jewelry.

She was only 13 years old. But her husband insisted that she prove her fertility. A month later, she was pregnant and suffering. “I had severe nausea and would vomit out whatever I consumed,” she told Newsweek Pakistan.

At least Bibi, now 14, survived. Child marriages are one reason that Pakistan has a high maternal mortality rate. Pregnancy and birthing complications are the leading cause of deaths for girls between the ages of 15 and 19 worldwide.

Her ordeal was not over, however. “I had a complicated childbirth and my son remains malnourished,” said Bibi. “I’m now pregnant again.”

Child marriage is a major problem in the developing world, as Voice of America’s The Worth of a Girl project illustrated. In Pakistan, parents believe girls should be married off as soon as they reach puberty to “capitalize” on their virginity and “safeguard” their honor. Three percent of Pakistani girls are married before they turn 15, according to Girls Not Brides, an advocacy group. More than 20 percent of girls marry before they turn 18.

As the Religion News Service wrote, men often coerce girls to marry, sometimes after kidnappings and forced conversions that tear the girls not only from their parents but their religious communities, too.

The girls don’t attend school or learn a skill for employment. They don’t pass the fruits of their education on to their children. Later, as their children grow up, they cannot stand up against their husbands, in-laws or parents who want the cycle to continue.

“Child marriage is one of the worst human rights violations,” Islamabad child rights advocate Samar Minallah Khan told the Washington Times. “It puts an end to a child’s right to freedom, education and to play – it takes away their childhood. They cannot be children anymore.”

Some Pakistani provinces have enacted measures forbidding or restricting child marriage, but current federal law allows girls to be married at 16. Potential punishments for men who violate the law are light: a month in jail and a small fine.

Federal lawmakers introduced legislation this year that would have fixed the legal minimum age for marriage at 18 nationwide. However, a parliamentary committee, under pressure from religious groups, recently recommended that the bill should not be approved by the National Assembly, reported the News International, an English-language Pakistani paper.

History will remember those who refused to stand up for girls.

British Prime Minister Boris Johnson’s gambit to limit the time Parliament has to derail his Brexit plan by accelerating a routine suspension of the House of Commons will go ahead, following the agreement of Queen Elizabeth on Wednesday.

To cut short the time opposition lawmakers have to mount resistance to his drive to pull the country out of the European Union with or without a divorce deal, Johnson set Oct. 14 as the date for the Queen’s Speech – the ceremony that marks a new session of Parliament, Reuters reported.

Because the speech is preceded by a suspension of the legislature, the move will effectively shut down Parliament beginning in mid-September for around a month, as the Oct. 31 deadline for Britain’s departure from the EU looms over the country – and broader world economy.

Opposition leaders wrote to the queen to ask her to reject the proposal, but she declined to intercede, increasing the possibility Johnson will face a no-confidence vote and causing an abrupt drop in the value of the pound.

Taking Up a Challenge

India’s supreme court said Wednesday it would take up legal challenges to the government’s controversial move to revoke the special status previously afforded to Indian-administered Kashmir under the constitution.

The court ordered the central government to file its replies to 14 petitions and provide details about the media restrictions it has imposed in Kashmir, the Associated Press reported. Five judges are slated to begin a regular hearing on the matter in October.

Controlled by Prime Minister Narendra Modi’s Hindu nationalist Bharatiya Janata Party, India’s central government has instituted a security lockdown and media blackout in Muslim-majority Kashmir since the Aug. 5 move to revoke laws that granted the state significant autonomy and prevented other Indian residents from settling there. Some restrictions have since been relaxed, but the situation remains far from normal.

The government has said the measures were designed to prevent a violent reaction in the state – where a homegrown separatist movement complicates India’s territorial dispute with Pakistan. But they have raised concerns from human rights activists and opposition politicians, who were also blocked from visiting Kashmir until the supreme court intervened on Wednesday.

Costa Rica moved officers from its national police force to its border with Nicaragua following reports that the Nicaraguan army had conducted a raid on Costa Rican territory, according to a top Costa Rican official.

Costa Rican Public Security Minister Michael Soto said in a statement this week that witnesses reported a raid by the Nicaraguan military in the border town of Pocosol de San Carlos that reportedly killed a young man “apparently of Nicaraguan origin,” the Tico Times reported.

The incident has ramped up tensions between the two countries resulting from Costa Rica’s support of the opposition movement against Nicaraguan President Daniel Ortega, whose repression has left at least 325 dead, the Costa Rican English-language news site said.

Surfer’s ear happens when a person is constantly exposed to cold water and air, leading to the growth of bony protrusions in the ear canal.

The condition is mostly associated with surfers, but swimmers and divers are also vulnerable if repeatedly exposed to cold water.

Scientists have known for some time that the ancient Neanderthals could suffer from the condition too, but only recently realized how common the condition was, CNN reported.

A team of researchers analyzed the ear canals in 77 skulls of Neanderthals and early modern humans who lived in western Eurasia during the Middle and Late Pleistocene periods.

They noted in their study that surfer’s ear was much more common in Neanderthals than in early modern humans, although the cause behind this phenomenon remains unclear.

Scientists speculate that the extinct people lived or foraged for resources in aquatic environments or cold climates, leading to mild or severe bony growths in their ears.

Genetics might also be a factor, as it is in modern humans.

Regardless, archaeologists have yet to find any prehistoric surfboards or evidence that Neanderthals were avid divers.